Occupy London at the Bank of Ideas in Hackney

In the information room at the occupied UBS building in Sun Street, YouTube is playing Steeleye Span's All Around My Hat. Otherwise, the relaxed banter, grumbles about meetings and infrastructure hassles are typical of any corporate reception area in the City. But, as in prison, don't expect people to close the lavatory door. Is it aggressive for a man to pee in front of me, or are we all comrades now?

A woman asks if she can help and is handed information. 'It's just a list of headings and phone numbers,' she complains, and leaves. But things aren't structured. Two trainee psychotherapists walk in off the street and offer a seminar on the idea of community. That's how it works.

David says: 'There's a global conspiracy and we're trying to put things right. I got on the bus and the driver said you're for the camp, aren't you.'

Lee was marching yesterday, when public sector workers were on strike: 'I was so disappointed that the tubes and buses were still running. Still, you can't change things by striking. The people who were penalised were the strikers themselves. The Government must be laughing their tits off. We need people jumping the gates at number ten. Let the people see what'll happen when the food shortages come. You get a bit militant when you haven't had food in your stomach for three days.' Lee warns me to stay away from the Olympics, predicting a terrorist coup.

The theory that Mossad instigated 9/11 is current here.

Someone brings Lee herbal tea in a jam jar. 'Ugh, still no milk,' he says.

Steve, who reminds me of Stalin, asks if I'm East European. 'Might be,' I say, 'I don't know who my grandfather was.' Steve's ancestors are Russian-Polish-German Jews.
'What brought you here?' I ask.
'My destiny and my two feet. A belief in a world that has to be changed for the better for everyone.'
I ask if he has any pets.
'All the animals in the world. I'm a vegetarian.'

Someone comes in to ask if he's changed his mind about some unrelated topic.
'I changed my mind into a pair of baby bushbabies,' he says.

I ask Natalia what nationality she is. 'I am a citizen of the world and I don't believe in nationality.' Lee says she is Colombian and calls her Lolita.

Acacia says, 'My mother was going to call me Sky but decided it was a bit cliched. Then she saw a documentary about giraffes eating acacia trees.'

She is from Devon and has been in London for two weeks. She's here to learn - 'everything from Spanish to law to juggling. Personal growth.' She picks up a guitar and plays an old Spanish song called Romance. She'd like to have a lurcher and intends to be a tree surgeon. 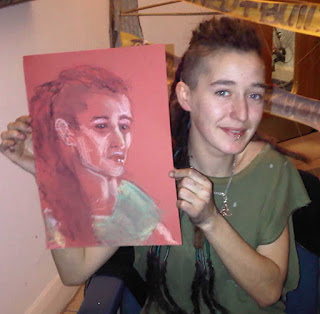 James walks in and asks if there's an extension cable for the study room and library upstairs, or cash for one.
'Good luck,' says Acacia. 'If you find one I'm stealing it off you. Buy one or put it on a wish list.'

Lee nicks her roll-up and takes it outside to smoke it. He returns and says to her, 'Violence is not the answer.'
'I don't do violence yet but I'm mentally punching you right now,' she says.

An affable man looking like a cross between Clark Kent and Buddy Holly, in tweed jacket and tie, asks to look round the building. 'Just sign the book to say which bit of MI6 you're from,' says Lee. The man takes a long time studying notices and leaflets. 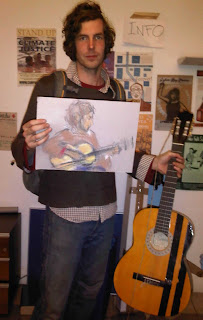 James picks up the guitar and strums quietly. He plays Lay Lady Lay. I say, 'I started an ill-advised affair because of that song.' He is summoned to a meeting before I can talk to him so I quote from his blog: 'Scepticism is an invaluable tool in politics but we must bear in mind the sceptic is very different to the cynic and I fear it will be cynicism often in the guise of humour that could present the biggest threat to this burgeoning movement. Forget the cops, kill the cynic in your head.'

I'm wondering where the laughs are to be found here. It's a bit edgy and there's a suggestion that one of my sitters today is an agent provocateur. It turns out to be false.

Some people are absorbing patterns of rigid corporate behaviour.The building is sick.

Posted by Isobel Williams at 21:57