In court with Extinction Rebellion 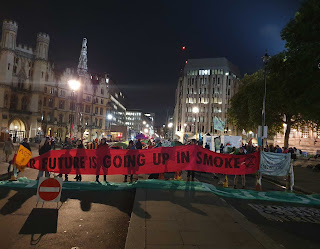 When it comes to stopping London traffic, Extinction Rebellion is pathetic. They may be creating up to two weeks' inconvenience, but there's no let-up from TfL's ever-tightening stranglehold all over the city.

Meanwhile the court system, already congested, struggles to deal with XR arrestees from the April action. City of London Magistrates' Court is processing most of them. Today, about 50 are attending plea hearings. A cluster of the red rebel brigade, with their whitened Buster Keaton great stone faces, clings to the doorway like a scarlet sea anemone waving its tentacles. 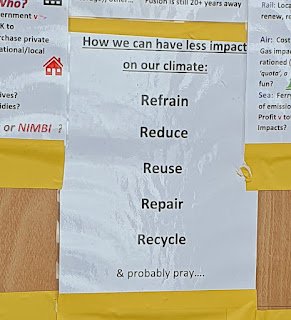 The staff are under pressure. One of them prods my handbag. 'Is that a bottle?'
'Do you want me to drink some?'
'Yes,' he says, but turns away.
I ask him to watch, which annoys him, but I'm not going through this pantomime without an audience.

About 30 people crowd into a small annexe to Court 4 - defendants, being rapidly briefed by a solicitor, plus supporters. Vegan snacks are spread out on a table - cereal bars, grapes, bread, hummus, nuts (courtesy of XR, not the court). In this air-conditioned building the room is stifling. An official opens the misty double-glazed windows. Something for an eco architect to sort out. We hear the occasional banshee wail from the red brigade outside.

A woman tells me that, while protesters were sleeping in a crypt last night, an infiltrator stole electronic music equipment, including one man's entire music output. Back up, people. Also her phone, which contained her rail ticket home.

Eight defendants who have pleaded guilty are ushered into the functional starkly lit court room, together with their supporters, who outnumber them and sit at the back.

'I was locked on to the hearse on Trafalgar Square yesterday,' says the supporter next to me. She released herself as the police didn't have time to get round to everyone. How do glued-on people unstick themselves? She says you can use acetone or Coca-Cola, which confirms everything I've always thought about that evil drink. I ask politely about the lavatory arrangements for the glued-on and I'm told people bring round buckets. 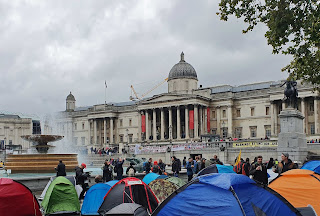 The district judge is businesslike but benign and keeps the atmosphere calm. The defendants have been charged under Section 14 of the Public Order Act 1986 - generally because they ignored police instructions to leave a static, passive protest. A policeman is quoted: 'I saw the defendant lying in the carriageway singing.'

The youngest is a student aged 19, the oldest is retired. Three women, five men. One is represented by a lawyer. The magistrate advises the others to note what the lawyer says in case it helps their own statements.

'We will hear very eloquent speeches from the self-represented,' says the lawyer to the magistrate. 'Think about the range of people before you and the number. This is possibly the largest campaign of civil disobedience for 150 years.' Is he referring to the Chartists?

He quotes an apocalyptic open letter from Professor James Hansen, NASA's former head of climate research, which highlights catastrophic 'climate denialism and associated pseudo-scientific canards.' I think it's this one.

The lawyer adds that the protest 'is about the survival of humanity itself. Bear in mind their good character, the danger they seek to avoid, the clear scientific consensus and the failure of government to act.' 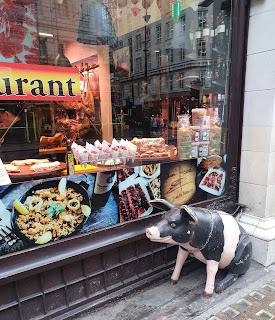 The magistrate says that he has 'spoken eloquently on behalf of all the defendants', and has claimed that 'the law has been broken for a noble motive' using a 'scientific basis'.

Among the observers sits a tricoteuse. Crochet, anyway. She casts on and does about four rows of openwork using two skeins of thick yarn simultaneously, pink and purple. She is wearing the black tee shirt with glittery spider motif in honour of the Supreme Court's prorogation judgment. It has become clique-wear. Like mods and their parkas. Or some French aristocrats during the Revolution and their blood-red necklaces or ribbons in defiance of the guillotine.

The remaining seven defendants each make a short speech in mitigation, mostly from notes, although the one who apologises for not having prepared anything speaks concisely and makes a good impression. She works with children in care and doesn't want to risk her career. 'I'm deeply sorry people have been impacted... I am ashamed and terrified by being arrested but I sent a message to our government that I'd no longer be complicit in this mass extinction.' She is reluctant to have children.

The magistrate says that she has expressed her 'moral obligation' and this term is adopted by other defendants.

'I'm the sort of person who always follows the rules,' says a scientist with a PhD and two young children. The current level of carbon dioxide was last seen three million years ago. 'Brexit will be a side-show in comparison [but there's linkage - Ed.]. I don't want to disrupt people - I feel incredibly uncomfortable with that...There is no non-extreme future. There will be extreme cuts or extreme impacts. Nature doesn't do deals... You can't argue with the physics... Environmental activists are being killed in other countries... I was kept for two hours in a van and 24 hours in a cell, with no phone call allowed until the next day, causing distress to my family... This should be a political issue. Calling us "uncooperative crusties" is not helpful.'

The magistrate points out that many defendants 'are highly qualified people with insight into the issues.' 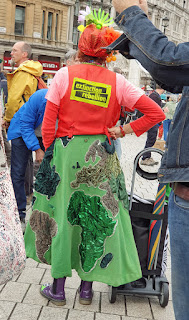 'I plead technically guilty, morally innocent.' (That is not recognised by the court.)

'The UK is among the most nature-depleted countries in the world. Since 1970, 77% of airborne insects have disappeared.' I think of the tapestry of insects which no longer impacts the windscreen on motorways.

'I didn't expect to find myself as a middle-aged man in the back of a police van... I apologise for taking police away from normal duties... Many officers shared our concerns if not our methods... I would have acted differently if I'd known how this was going to play out.'

'Business as usual is killing us.'

'The Government declared a climate emergency after our last action.'

The district judge says that, unusually for people who break the law, 'you did it from a sound motivation and genuine and legitimate concern about the planet and man's activities.' Even so, 'it is the court's duty to look at offences from all perspectives.' The police statement said that there was 'very considerable impact on transport infrastructure, local people and business.'

Each defendant is of good character. One defendant's encounter with a class A drug is old enough to be exempt. Another's 'excellent A-Levels' have been referred to earlier, so keep revising, kids.

Full credit is given for a guilty plea, making the sentence 'lower than it might otherwise have been.'

Each is given a conditional discharge for six months. 'If you choose to commit an offence and are found guilty, this matter can be reopened and you can be sentenced afresh.' They are given two months to pay £105 - three months in the case of the student. The magistrate asks those who want information about the police body-worn footage to stay and talk to him.

I leave court and go to the Strand, where rough sleepers open another chasm. 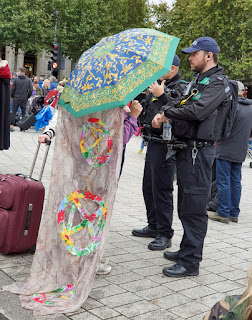 It's easy to feel alienated by the dominant tribe within XR - the public yoga, the suffocating middle-classness, the terrible poetry which admits no criticism, the right-on self-righteousness. Don't patronise me, don't parade your cloying sense of moral superiority.

But in court today the argument is distilled. The professional framework, the crisp pace and the display of true conviction without the dafter stunts help to unscramble the message. And I like the stipe, who combines a man-of-the-people air with the reassurance of a top-class obstetrician.

NB if you want to find out about court listings and other data, good luck.

I wander around Trafalgar Square, hoping to see any of the people I used to draw in the emotional sprawl of the Occupy camps, most of all our beloved Tom who avoided the horrors to come by dying at the age of 28.
Posted by Isobel Williams at 17:21 No comments: