The death throes of Occupy London at Finsbury Square

The Finsbury Square Occupy camp has turned its dysfunctional back on London. On this hot day it smells of human ordure. The Portaloos have been confiscated by the hiring company for reasons best not aired.

My courage fails. Lunchtime and they're still not up. Alone in the desert, I send a bleaty little email to the Occupy group of 350-plus names (the commanding clique, plus the police, plus God knows who). This communal inbox is often clogged with ungrammatical, humourless, sour, distorted rubbish from failed Trots making a last-ditch parasitical attack on Occupy in the spirit of grubs which grow inside host bodies. Some of the more interesting correspondents get themselves banned or opt out. Occupy's faith in inclusivity is why each nest has a cuckoo in it and why I'm allowed to traipse around the camp, sketching.

Then I see someone I've drawn before - Andi, being warned by a policeman about a camper who hasn't taken his meds. Andi takes me to see his partner Chel. He has placed a trail of rose-petals on the ground leading to their tent. 'We've been together for seven years and only been apart for three days. One day kind of stretches and then it's seven years. It's a work in progress.'

Chel smiles warmly. 'We got married last Christmas on the steps of St Paul's. We haven't got a picture of us together.' (Sorry about this one.)

'She has so much strength,' says Andi. 'She's so fiery. She's stopped arguing with the world. When she does unleash herself she gets three times as much done as me.'

I'm experimenting with a lighter drawing kit - a new A4 sketch pad and pencils, instead of a heavy agglomeration of charcoals, Conté sticks, fixative and errant sheets of coloured paper in a non-standard size, aka a bastard measure.

I'm struggling with the unresponsiveness of the anaemic paper, but I don't want to let Chel and Andi down. When I've finished the picture - or just stopped drawing, which always comes first - I discover that I've been drawing not on a creamy sheet of cartridge but on the reverse of the paper cover of the sketch pad.

I confess to them. My mother used to quote a neighbour from her childhood saying: 'I could have crope into a nutshell.' But Chel and Andi are forgiving.

Tigger looks up from treating the ringworm on his feet and discreetly warns Chel not to answer my questions; I could be an agent provocateur.

Brian's skin has purple and ochre in it. That's the last time I come here without more colours.

Then - a shock - E, the Clint Eastwood of Occupy, hobbles out of a tent, reluctant to use his crutches. I'd recently been told he wouldn't walk for a year, having broken the balls of his feet jumping from the Paternoster Square Column.

We stroll to a communal tent with grains of expanded polystyrene on the dusty earth. For a few hours time is meaningless, which is why I return to Occupy. Whenever I march towards the camp I feel like telling Occupy to wash its face, eat up its carrots and stop being intellectually lazy - but then it looks up at me with it big brown puppy eyes and I go into a trance. Which is a betrayal of the intimidated couple who own a restaurant in the midst of what is now a latrine. Guys, it's time for the defilement to stop. You should never have started it. Your rat-ridden, destroyed kitchen tent is the backdrop to your offers to run the restaurant for them. And you are in court this Friday.

'Romeo y Julieta,' says Alex, reading the label on his Havana cigar. 'I'm too sexy for my spliff,' he growls.

Andrew, stoned out of his mind, is fascinated for about an hour by the leopard spots on my dress, shoes, belt, cardigan and spectacles. I'm wondering if he's counting them. Gusztav, who is Hungarian, has a beautiful face but I don't capture it.

Josh, from Glasgow, is being tattooed above his left nipple by a Frenchman who learned how to do it in prison.

Then Lee lets Leila, a French girl, tattoo his arm with the same unwashed blade.

People are hungry. There's loose talk of a dine-and-dash (a term new to me; it means what you think it does) in Pizza Express or Subway.

E limps off with his backpack to catch a coach to Glastonbury. 'Oi, come back and get your crutches,' shouts Lee.

At Occupy London, Finsbury Square, with another artist

I ask Richard Cole to draw at the Occupy London camp in Finsbury Square. I have invited other artists to join me but he is the only one prepared to take on the squalor and the mud.

There is no one about when we arrive at 10.30am. The vegetable plots, formerly civic flower beds, are suffocated with weeds. A metal bowl of half-eaten cold lentil something is on a table in the front of the devastated kitchen tent.

A few occupiers emerge from tents in search of sausages. Richard sees how agitated souls are supporting each other and is quietly aghast but compassionate: 'It fulfils a social need, I suppose, and gives the people here something to do,' he says.

Finsbury Square, although laid waste by the campers' incompetence, indifference and sloth, remains a village of mutual support in the face of destruction wrought by addiction and mental illness. The Pilion Trust is trying to help homeless people move on. Once the campers have gone, the land will be cradled back to health by the taxpayer.

There are some altruistic and motivated individuals in Occupy who have endured ghastly camp conditions: 'The mud is worse than the cold,' says one. Tammy, who was the named defendant in the lawsuit to evict the Occupy camp from St Paul's, is still not fully aware of her instinctive powers of creative leadership, and would be running something rather important if she'd had Richard's or my education opportunities.

But Occupy London has dwindled over the last six months from an eye-catching movement to a self-destructive clique. In the time-honoured tradition of major corporations, rival internal factions are blaming Occupy's lack of appreciative press coverage a) on media bias and b) on their own PR support.

A flock of clean, freshly dressed young people arrive. They pause on the outskirts of the camp as if waiting to be admitted through a non-existent portal. They stick together, reluctant to separate. They are students from Central St Martin's College of Art, despatched on a mission to draw. One of them brightly asks me what I think of Occupy. 'Read my blog,' I say, wishing it didn't sound quite so much like 'Kiss my arse.' Apart from the Doc Martens brigade, they are inadequately shod and pick their way like exotic birds through the slippery mud. We don't see any of them drawing. 'I blame their teachers,' mutters Richard.

'There are ten million xxxxing artists here today,' says an occupier. 'Let's kill them all.'
Another one turns to me. 'Will you draw me for my mum?'

Tigger took part in a group action against banks in the City the previous day, running into the reception areas of glossy buildings to leave stickers or, as one occupier put it, 'We xxxxing terrorised some evil corporations... We want these bastards to be hoping that they don't see us again, to fear us.'

Tigger is dutifully polite about my drawing and very excited by Richard's: 'That's sick, man!' He rounds up his comrades to look. 'Banging!' (Richard's are the drawings on white paper.)

Tigger needs five pounds: 'I'm going begging now,' he announces.
'What do you say?' I ask.
'Can you spare a few coins,' he says.

He comes back a bit later.
'How much did you get?' I ask.
'Nothing. I think I'll go back to sleep for a bit.'
I wonder if I could draw five passers-by for a pound each on his behalf, but I fall into Occupy torpor and don't do anything about it.

Richard is light on his feet: he draws standing up with crayon and pad, whereas I'm perched on the only clean-ish flat surface I can find, faffing around with charcoal and Conté sticks and loose sheets of paper, trying to keep my paraphernalia out of the slime and guarding my fixative spray from its admirers.

I'm hoping to see E, Occupy's answer to Clint Eastwood, but I'm told that he's in hospital: he broke both feet and will be unable to walk without aid for up to a year, having jumped down from the column in Paternoster Square after briefly occupying it. I text him to commiserate and he texts back: 'Yeah my feet hurt but worth it.'

Richard and I sit on a squishy sofa in the sunshine. We are, briefly, the public face of Occupy. A cheerful group of men with paunches shout at us from the other side of the road: 'Oi, gerra job!' Richard has enjoyed a long and successful career as an artist, teacher, cartoonist, caricaturist and illustrator, and has worked for most of the broadsheets; he spends up to three months a year in France, where he has a studio. This autumn sees the publication of his book Portrait of a French Village.

He was the only artist drawing the proceedings at the American courts martial in Baghdad concerning abuse at Abu Ghraib prison. He uses pencil and watercolour for courtroom work. 'I was drawing quickly under great pressure. Runners took my finished drawings to the studio. The pictures were almost animated as the watercolour was still drying in front of the cameras.' Steve Bell, the Guardian's cartoonist, used Richard's images as inspiration: they were the only source material since cameras weren't allowed in.

A drawing can say more than a photograph. 'And it can be a map of time,' Richard says, 'as the drawing takes place over time.'

Richard went to Baghdad under the umbrella of CBS News. 'I had a couple of ex-SAS guys looking after me. They met me at the airport and said they had to take some burgers back for the guys in the news bureau. I thought, I've risked my life coming out here and you want to take me to a burger bar? This could be terminal. But it was in the terminal, where some GIs were based. They were queuing up with their rifles at Burger King. We left the airport carrying enough burgers for 20 or 30 guys. I had this flak jacket on and I thought, I'm going down the most dangerous road in the world but I don't need the flak jacket as the burgers are sufficient protection.'

Someone brings over an Evening Standard: BANK WARNS OF A EUROZONE STORM.

Richard takes a last look round the camp and says, 'I think I might come back.'

Posted by Isobel Williams at 11:45 No comments: 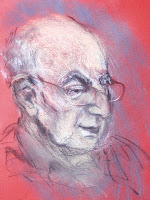 My father has always made lists. Here is an extract from an unexplained handwritten list, in alphabetical order. Probably from the 1980s, it's fastened with a rusty staple: 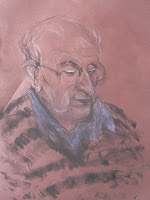 Now he lists the flavour of each liquid nutrition supplement that he drinks, three times a day, in a notebook. This afternoon he writes down: 'fruits of the forest'.

A nurse puts her hand on his shoulder. 'I love you, Arthur.'

Posted by Isobel Williams at 14:31 No comments: