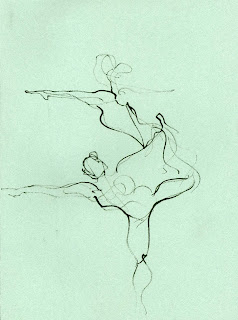 The email of doom. 'We're doing our fundraising auction and looking for prizes. I wondered if you might offer to do a sketch for someone.'

I refuse, pointing out that no one would bid and my humiliation would be total.

My virtual arm is then wrenched out of its virtual socket, so I end up at a charity do in Inner Temple Hall. The architect of my doom is Joanna Kennedy, chief executive of Z2K which campaigns for vulnerable debtors. Z2K is sharing the event with the Bar Pro Bono Unit.

Someone I know is sitting next to me. She asks, 'How's your life going?' 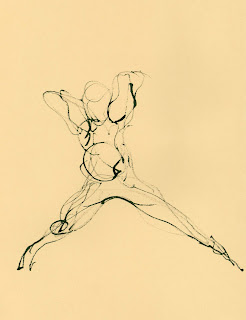 I visualise some blotto Rumpole who's just done well at the bookies.

Then the quiz. I'm mostly rubbish but am the only person in the room to attribute a quotation to Kipling: 'And a woman is only a woman, but a good Cigar is a Smoke.' Look, he's being ironic.

Afterwards, my top bidder gets in touch. Rebecca Stubbs QC of Maitland Chambers. How will this work out? I hope she wants me to draw a cat or a house or something. I don't want the full beam of a sitter's attention. 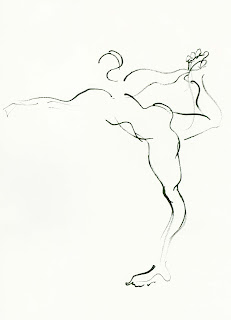 I meet her in chambers. It's not one of the mouse-ridden sort. She has a lovely airy room with a good light. She is self-aware but not self-conscious. And she has solved my problem. Being a multi-tasker, she has decided to get on with her yoga.


Her style of yoga demonstrates why she is very successful in a brutally competitive field. She is driven. Gutsy. Powerful. She has stamina and total concentration.

I can just pursue my private struggle, chewing off my lipstick with the stress of it all. She tolerates my ink-spills (hastily mopped up) and my swearing. I leave wet drawings to dry all over her room until the next day. She doesn't mind.

If the QC market collapses she would do well as an artist's model. It's all about core strength and focus. 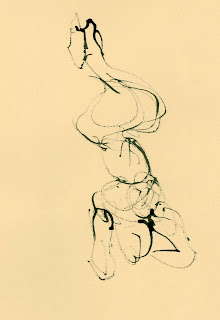 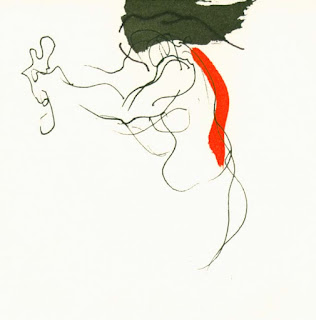 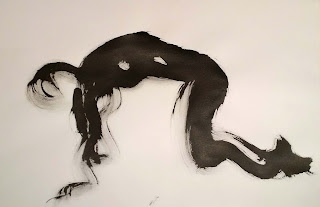 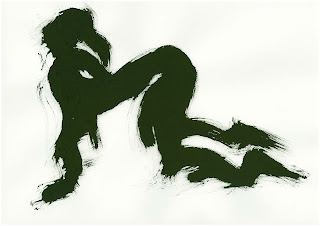 There will be two digital reproductions from this set of drawings in a solo exhibition at Senate House (London) starting in June, held under the auspices of the Institute of Advanced Legal Studies. 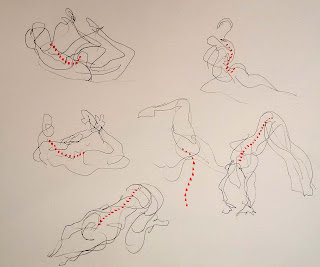 Posted by Isobel Williams at 11:05 No comments: 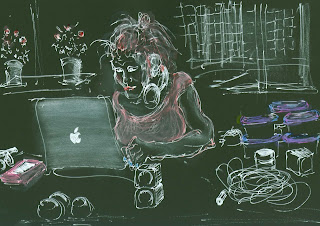 I get The Fear when Hannah Thompson describes how she makes soundscapes out of the general racket in Senate House. It's too much like O-Level physics.

At school I switched to physics-with-chemistry, a pantomime-horse subject for people with soft-boiled science brains. I ended up at the sort of college which tolerates women who read without noticing that the porridge is boiling over. 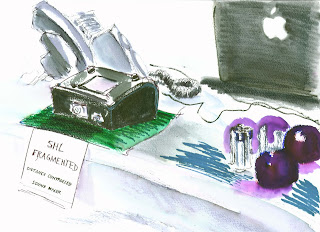 Today Hannah works ferociously in her studio in Senate House. She is the Leverhulme-funded sound artist in residence, recording upheaval in the life of the building as London University institutions move around the Monopoly board.

Hannah is preparing for a performance on 2 June. She's scouting for a violinist to join her in the Bach Double. Contact her if you think you're hard enough. 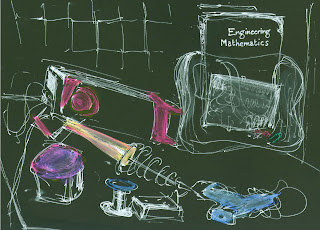 She is also creating a soundtrack for the exhibition of Senate House Library treasures, Shakespeare: Metamorphosis. Around the building, staff members' recordings of Shakespeare gobbets are set off by movement sensors in Pound Shop plastic boxes customised with a soldering iron. 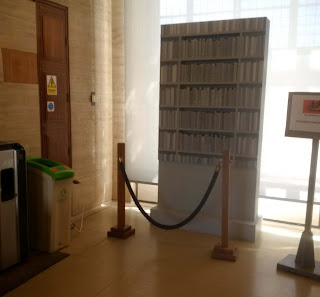 Outside Hannah's studio is an installation by Tom Phillips, The Library at Elsinore. The painted-over books - real ones with titles from Hamlet - compete with the cacophany of signage.


This is how it was displayed at the Royal Academy Summer Exhibition in 2007 (below): 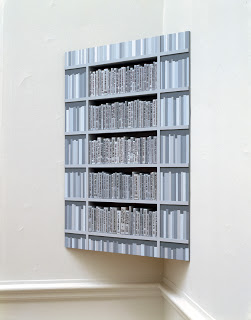 In 2008 it was exhibited by the Laurence Sterne Trust at Shandy Hall, North Yorkshire. Where next?

I go home on a sweltering Heatherwick Routemaster, which rhymes with design disaster, reading The Journal of a Disappointed Man by W. N. P. Barbellion.

He describes the almost-sound that Hannah's instruments can't capture: 'The Porter spends his days in the Library keeping strict vigil over this catacomb of books, passing along between the shelves and yet never paying heed to the almost audible susurrus of desire - the desire every book has to be taken down and read, to live, to come into being in somebody's mind. He even hands the volumes over the counter, seeks them out in their proper places or returns them there without once realising that a Book is a Person and not a Thing. It makes me shudder to think of Lamb's Essays being carted about as if they were fardels.'

Fardels, a word from Hamlet. Later in the journal: 'The best girl in the best dress immediately looks disreputable if her stockings be downgyved.' Hamlet again. The current of words, the ocean of association. 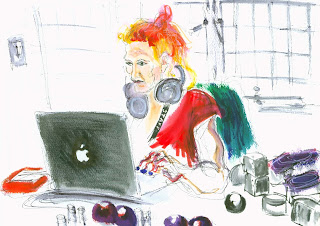 I have a small exhibition in Senate House under the auspices of the Institute of Advanced Legal Studies starting in June. No sound but enough rope.


Posted by Isobel Williams at 19:17 No comments: