Cold case - evidence sought. In 1979 a crime was committed in the dock of Court no. 1 at the Old Bailey, in front of the judge.

The perpetrator was Tom Keating, the artist, picture restorer and master forger. On trial for unleashing his 'Sexton Blakes' (rhyming slang for fakes) on to the art market, he was defended by the redoubtable Lord Hutchinson.

Here is an extract from Jeremy Hutchinson's Case Histories by Thomas Grant QC:

"Meanwhile Keating himself spent his time in court drawing. It was reported that he had already accomplished seven sketches of faces in court and that the 'policeman whose job it is to make sure he doesn't bolt for it was full of admiration for his work'."

It is illegal to draw in the courts below the Supreme Court. When I tell people this, they visualise all those pastel courtroom sketches and say I am deluded. But these have to be drawn from memory. Please see section 41, Criminal Justice Act 1925. The penalty for drawing in a court or its ill-defined precincts is a fine and a criminal record.

Judges have no discretion in the matter. Except for one, it seems. Was Sir James Miskin, the Recorder of London, indulgent, unobservant or just a bit rusty on the Criminal Justice Act?

He and Keating are now dead. Does anyone know what happened to the sketches?

The prosecution abandoned the case after Keating came off his motorbike and was not well enough to attend court. Some said the art market should have been in the dock, rather than Keating, who became a folk hero. If you find Civilisations a tad disappointing I suggest you watch his enlightening Channel 4 series Tom Keating on Painters on YouTube.
Posted by Isobel Williams at 17:22 No comments:

I return to the long-running disruption that is Havona House (planning permission applied for in 2009). Here is the impression on the website of the project's original architects. They have removed the zebra crossing at the foot of Portobello Road: 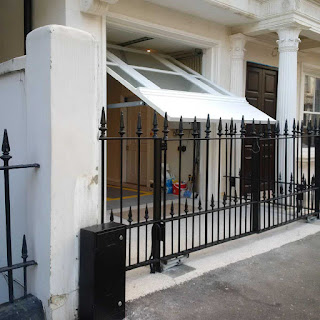 The original architects say: Havona House, Pembridge Villas, is a 10,000 sq ft new build house in Notting Hill Gate... The new property totals seven floors, including the largest private indoor swimming pool in London within a four storey basement. A traditional facade design is based on the Tower of the Winds, including a set of modern sculptures commissioned from celebrated artist Theo Gayer Anderson. The design emulates the historic development of the Notting Hill Gate area, which saw the 18th century house type develop into Italianate Villas in the late 19th century.
CLIENT: Private
YEAR: 2011
BUDGET: £3.5 million

I am envious of my neighbour Barry, who saw a car being driven into the garage, or rather car lift. To the mournful crossing-sweepers and apple-cheeked rapscallions merrily whipping their hoops along the cobbles hereabouts, that would be a bigger treat than seeing Tower Bridge open. 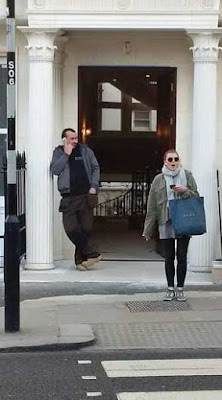 In the picture above you can glimpse a spiral staircase and, at the back, one of the windows in the overlooking properties. 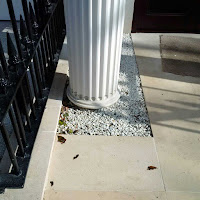 There are more than 1500 empty homes in the Royal Borough of Kensington and Chelsea. We're waiting for this one to have a resident. Must like swimming and balls. Previous post about it is here
Posted by Isobel Williams at 17:27 No comments: