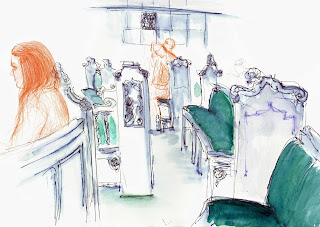 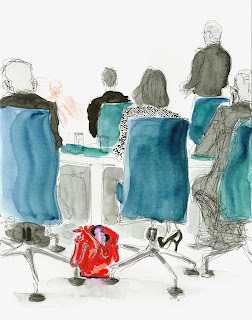 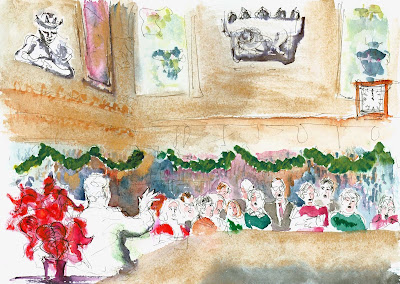 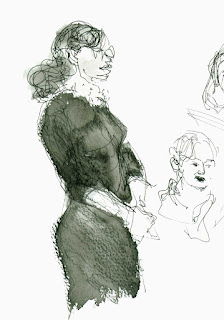 Posted by Isobel Williams at 20:46 No comments: 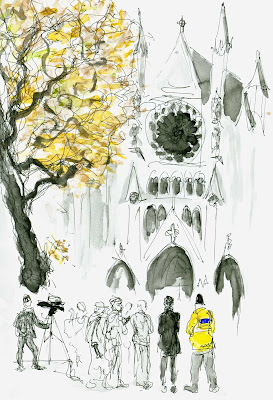 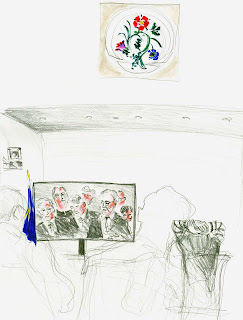 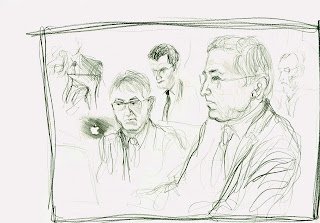 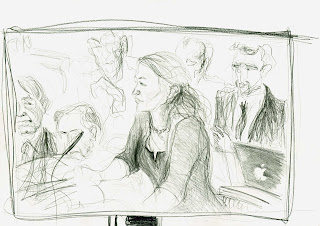 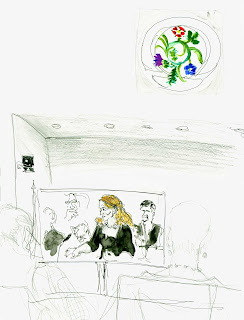 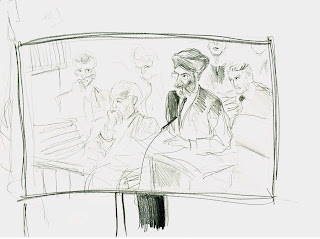 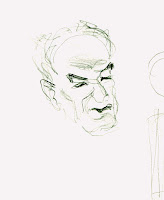 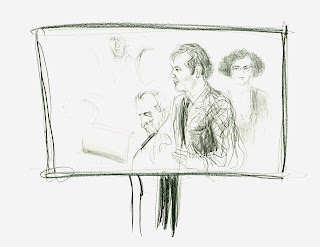 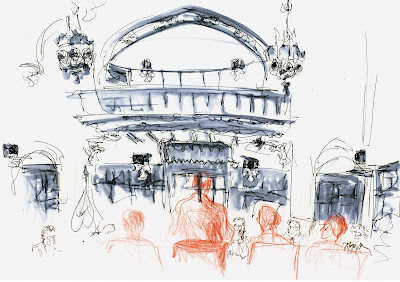 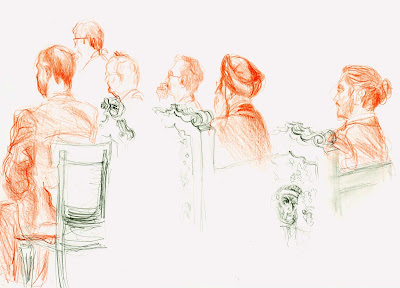 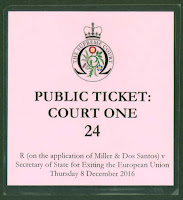 Posted by Isobel Williams at 00:09 No comments:

I board a train in Warwickshire. I watch the newest folk hero, Lord Pannick, on my BlackBerry. He should sell his recorded advocacy as a cure for insomnia – he is not boring but soothing, authoritative, sometimes incantatory.

He makes it all look easy and I am lulled into a heedless trance. Then I leave a breathtakingly expensive pen on the train. Bother.

I take a cab. The sign in my drawing is all about Brexit. A late arrival at the Supreme Court, I'm in one of the overspill rooms.

The Irish question. When I got married I asked my husband if he would take British citizenship. He thought it was an absurd idea. His parents marched against Mosley in Cable Street. Now he is a bargaining chip. Will we have to stand in different queues?

It’s a mess. Bones rattle. The auld triangle goes jingle jangle. Ronan Lavery QC addresses the court: ‘Take the applicant, my client, for instance, he is a Protestant from north Belfast, he is a victim of the Troubles, he is a victims' rights campaigner. He is here, has always attended court with his friend who is a catholic. But his son was murdered by loyalist paramilitaries. He regards himself as British, although many people in Britain may regard him as Irish. It is a complex situation, my Lords, my Lady, Northern Ireland, and there is a complex constitutional settlement.’

The room grows cold. Or is it me. 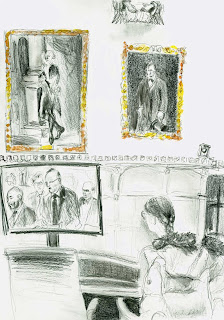 So, what’s going to happen? Who will win this case? At the end of day three, William Hill are offering 5/2 that the government will win and 2/7 that they will lose. That’s just betting, though, which consists of money, sentiment, superstition and hedging.

What about the index to the day’s transcript? This perfect source of found poetry includes a numeric index for all you Bletchley Park types. Are there any clues in this sample page, for example? I would pay to hear Lord Pannick read this out: 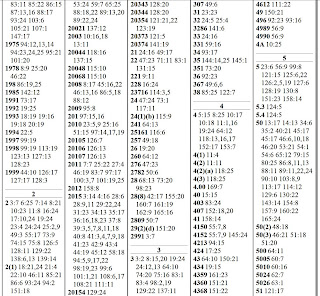 Or is Lady Hale giving us signs? On day one, she wore black and a brooch which looked like a double dragonfly. On day two she wore half-mourning (purple) and what appeared to be a beaten silvery blazing comet or quarter sunburst. Today she is dressed in deep blue and a metallic caterpillar. 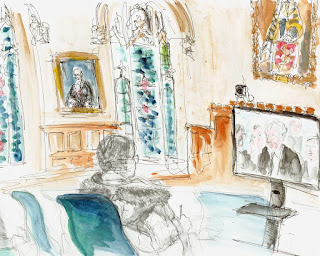 ‘Don’t be pessimistic,’ someone said to me yesterday, after my latest diatribe. ‘Nigel Lawson says global warming isn’t happening.’ That is an unfortunate combination of words to use against me. I find it hard to trust people at the moment.

David Runciman, a professor from the Remain stronghold of Cambridge, writes in the latest issue of the London Review of Books (read by the people of the smaller bubble inside the larger bubble, like me): ‘By choosing to quit the European Union, the majority of British voters may have looked as if they were behaving with extraordinary recklessness. But in reality their behaviour…reflected their basic trust in the political system with which they were ostensibly so disgusted, because they believed that it was still capable of protecting them from the consequences of their choice….’

His article does not end happily.
Posted by Isobel Williams at 07:41 No comments: 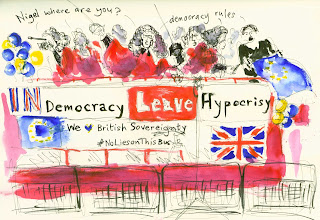 
And when I'm introduced to one,
I wish I thought "What Jolly Fun!" 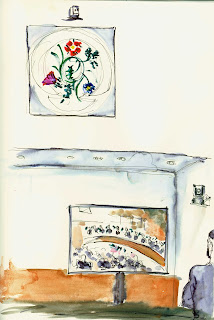 I've had it up to here with vast swathes of humanity lately. Still, let's be positive, eh.

I’m queuing to get into the Supreme Court for the Brexit hearing. Can parliament get to vote on triggering Article 50? The true spotters got here before dawn. (Sensible people watch it live on the website.)

A red double-decker bus swings around Parliament Square and parks outside. On top are cheerful people in judge fancy dress, brandishing fencing foils to be like the Master of the Rolls. 'Nigel, where are you?' they cry.

I'm directed to one of two overspill courts, to watch proceedings on a large screen.

'Her Majesty's Attorney General,' says someone, reading from the cast list. 'Is that Liz Truss?' 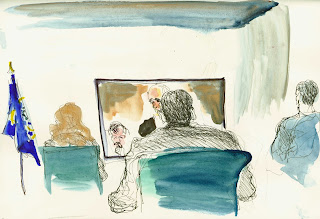 The hearing kicks off with fire and brimstone from the bench. Lord Neuberger has tough warnings for dealers in abusive threats, and explains that judges judge law, not politics.

He also thanks the staff for responding to the full glare of Brexit. The court is in superb condition, its engine purring softly. 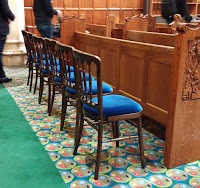 There is something rather touching about the blue velvet upholstered chairs, hired to cope with the extra numbers and matching the carpet. Everyone has leaned over backwards to explain, to inform, to welcome, to get the house-keeping right. 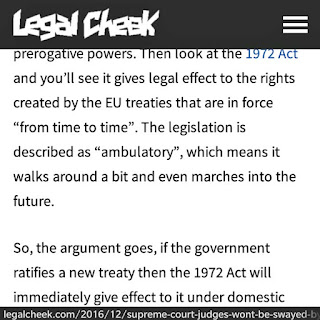 Ambulatory is a key word in James Eadie QC's argument on behalf of the Government. Blurrily reading Joshua Rozenberg’s commentary in the unhinged insomniac hours, I misread 'future' for 'furniture', and agree: the legislation has marched into the furniture or maybe the brick wall of Brexit. 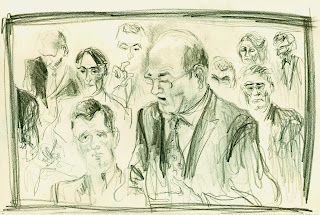 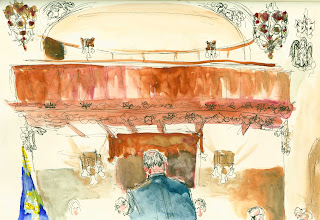 In the afternoon I'm allotted a seat in the packed courtroom - next to a proper court artist, one who can really draw and stuff. I thought I'd better be very small so I just brought A4, whereas he is happily playing around with A3, so I get format envy. Meanwhile, Mr Eadie parries piercing questions from the bench - the fencing foils come to mind. 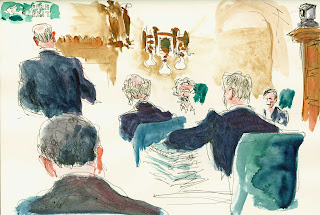 And now the fun part. Lovers of found poetry will be excited to learn that the Supreme Court's transcription of this case (ready on the same day!) is not only searchable but INDEXED. Here's a random sample of allusiveness: 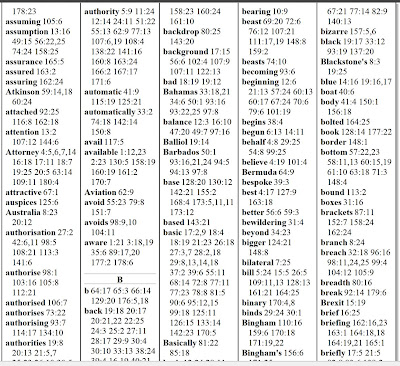 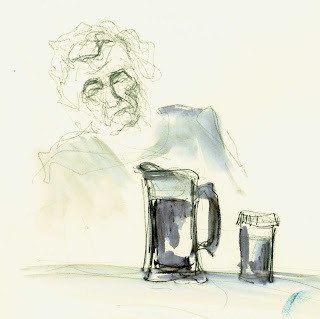 PS Do be careful, Daily Mail. Writing about the Supreme Court justices, you say: 'With no written constitution to guide them, this is not a mere question of law, to be solved like a quadratic equation, with a correct or incorrect answer.' Most quadratic equations have two solutions, so your analogy falls down rather. 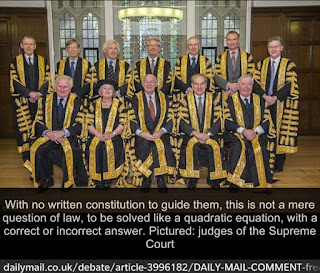 PPS there are lots of grown-up legal commentaries, including live tweets, but you only come here to know that Lady Hale was wearing a lovely brooch which looked like a double dragonfly, or maybe a damselfly.
Posted by Isobel Williams at 06:56 3 comments: