Another Saturday with Occupy London at St Paul's 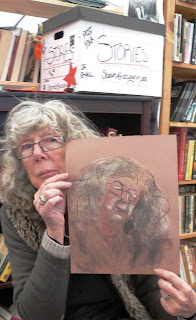 Liz Beech is a writer and artist working in Starbooks, the St Paul's camp library. 'I lived at Greenham Common for five years and came out profoundly changed. I was committed to non-violence as a really strong way of resistance and demanding to be heard. In the immediate aftermath of later protests that descended into violence I went to encampments offering non-violent direct action workshops, to be met with derision and an ageist agenda.

'But here for the first time I feel there's a real opportunity to revive non-violent protest - no one is going to pick up a breeze block and throw it. There are some people here with mental health problems but there's no strategy to commit violent acts. At Greenham, some women couldn't manage non-violence if they were being taunted by police or soldiers, but we'd help them, encourage them to move away.'

I coo over the portable manual typewriter Liz has brought to the library: people are invited to type their thoughts about the protest. It's an Erika, a robust German Democratic Republic model which is surviving the violent protests of a first-time user who can't work out how to return the carriage. Liz won a national short story competition when she was 17; her prize was an Olivetti Valentine but we agree that it's too glamorous to bring to the camp.


She wants to put four typewriters on the South Bank next year to gather people's recollections of The Queen's 60-year reign. Last year she had five typewriters at Glastonbury for people to write collective novels, contributing up to ten lines each and seeing only the previous ten lines: 'People were queuing up 24/7, we had to give them Scrabble and crosswords while they were waiting.' The camp library is saturated with novels and her wishlist is more poetry, non-fiction, art, politics.

Liz (www.thephoenixproject.org.uk) goes back to Shepherds Bush at night, 'But I'm here for as long as it takes. There's a collection of us making something happen in all the diversity of it. Including people I might find very difficult.'

Saskia was the first person I drew at St Paul's. We talk about the changes since the start, notably the influx of fragile, defenceless people: 'If you're being inclusive, you have to include them,' she says.

The camp also attracts EDL members: 'They can come here,' says Saskia, 'but they don't scare us and they can eff off. We don't feel the fear.'


I talk to an anarchist: 'I don't believe in changing the system but creating an alternative in which everything is free for everybody. I read social anthropology at UEA and I left at the time the Twin Towers came down. I believe it was an inside job to create the myth of terrorism. All institutions are corrupt, it's unchangeable.'

In the tea tent, someone bashes out The Red Flag and a selection from Queen on the twangy pub piano.

It's Jo-Jo's second day here. 'Draw her like a princess,' says a man sitting next to me. Jo-Jo makes sure that Angel, a scary-looking dog, is warm under a blanket. 'It's a good laugh here,' says Jo-Jo. She is young and I don't want to pry.


During the afternoon ambulances visit twice to deal with people in the first aid tent.


Debra has been here for three weeks. She says she contracted pneumonia on the site; is on the waiting list for three operations; is anaemic; a loner. She parts her clothing to show me the foil blanket around her torso.

She met a man at the camp; took him home but didn't trust his friend; needs to see him; he has no fixed abode; he appeared in court but she doesn't know what happened as he has no contact number; he makes up as The Joker. If she finds out about him she can leave.

The light is sinking and a cold blustery wind is lifting tents from the ground.

A first-aider puts his arms round a tense young man locked in an obsessively repetitive stand-up routine. A shaven-headed man with a copy of What Freud Really Said is haranguing protesters.

Two men walk up to the camp: 'Where can we donate?'

Posted by Isobel Williams at 21:50