'It's snowing in Paris' 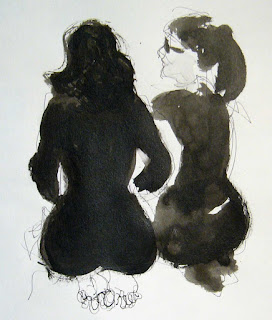 used to mean that your petticoat was showing. We didn't think then that petticoats were supposed to show.

Posted by Isobel Williams at 16:49 No comments:

Degrees of stalking at the Supreme Court 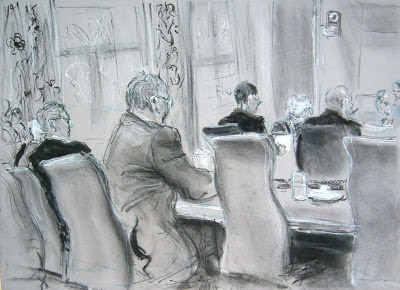 From the public seats it's about the backs of chairs. Their curves contain Hogarth's line of grace and beauty (on the palette in his self-portrait below). In his book Analysis of Beauty, he argues that sinuosity is more dynamic and gratifying than a straight line. 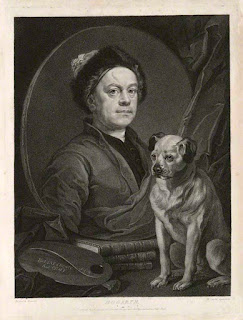 ﻿﻿In today's case, a man tried to persuade law enforcement agencies to investigate his former employer. His allegations had no substance. Is the ex-employee shielded because his aim was to prevent or detect crime?


﻿﻿﻿﻿Clive Wolman is congratulated more than once on his performance. But when Robin Allen QC stands up to defend with silky elegance, Wolman's left arm's default position is gripping the chair.﻿﻿ 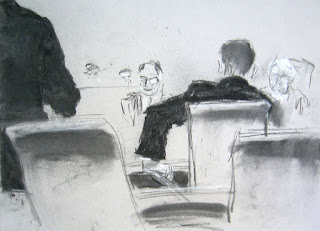 Is there a danger that Robin Allen will exceed his time limit? No fear: 'My lord, I have applied a guillotine to myself.'

I try to examine the optical illusion that creates two desk microphones in the foreground when I look at Lord Neuberger in the background.

﻿
﻿
﻿
Oops. Fleeting eye contact with a law lord. That makes me feel stalkerish. I wish I were invisible. Can they hear the accidental snap of my charcoal, like an interloper stepping on a twig?
﻿﻿
﻿﻿And do they get their own back? I'm told that at least one of the justices sketches during hearings. Which brings me to a fascinating book, The Art of Justice: The Judge's Perspective by Ruth Herz, herself a former judge in Cologne.
﻿

Pierre Cavellat, a judge in Brittany from 1929 to 1969, drew from the bench with the ruthless eye of a gagged social commentator (albeit with a weakness for a pretty face). The book painstakingly examines the emotional, cultural, forensic and aesthetic context of his work. He sees more than he says. I feel it's time for a Wim Wenders remake: The Judge's Fear of the Penalty. Which, for Cavellat, included capital punishment. 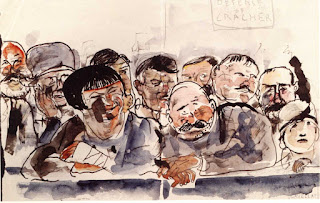 What would Cavellat make of today? I will have to try a Cavellat pastiche next time. Although French and Algerian criminals and Nazi overlords offer a more colourful cast than the Supreme Court on an average day. 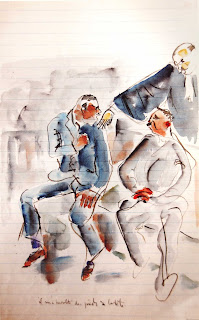 ﻿﻿
Then with a sly, barely audible mechanical sound in my left ear, a tourist behind me photographs my half-done drawing. Twice. I stifle my instinct to bawl her out. And no, photography isn't allowed.

Afterwards in the cafeteria I buy a Supreme Court biro and pencil and, sitting by the merchandise showcase, use them to draw a Supreme Court teddy bear. 'Do you work here?' asks a tourist while I'm sketching.
'No.' Although my coat does match the curtains. It's camouflage.

We can all be stalkers now that Supreme Court judgments are on YouTube. But the 'Comments' section has been disabled. That's not cricket. 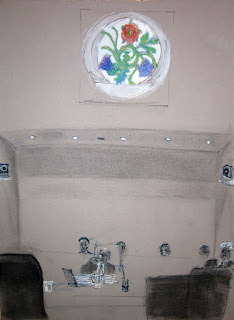 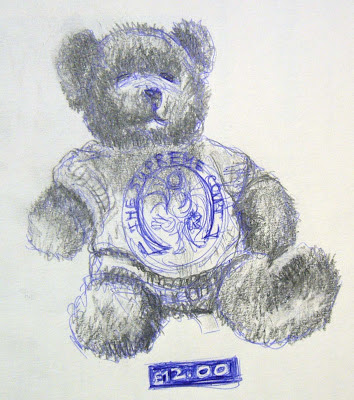 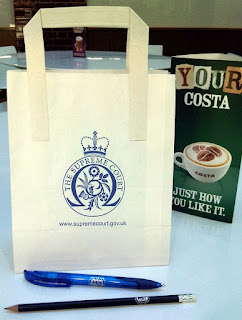 Posted by Isobel Williams at 17:38 No comments: