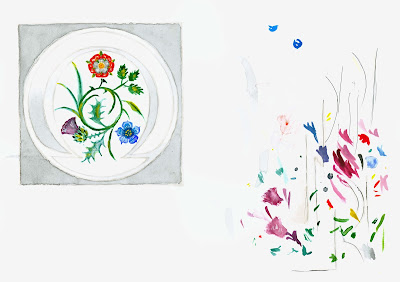 ..."and what is the use of a book," thought Alice, "without pictures or conversation?"

The UK Supreme Court Yearbook is more Wisden than Wonderland but passes Alice's test if you interpret 'conversation' generously. I'm asked to do a couple of new drawings for re-issued back numbers.


First, would I depict the court's emblem? Logos are sacrosanct but I persuade myself that it would be OK to represent the iridescent wall panel in Court 2, in the spirit of fan-fiction. I learn a new word - guilloché, the term for the intricate waves visible if you stand close to the panel. Apologies and respect to Yvonne Holton, Herald Painter in Scotland at the Court of the Lord Lyon and Dingwall Pursuivant of Arms, who created the emblem.

The editors select just the central posy (Tudor rose for England, flax flower for Northern Ireland, leek leaves for Wales, thistle for Scotland, let's not think about breaking the union). But here is the complete picture which includes omega (court of last resort) and Libra (justice), as well as my windblown colour tests. 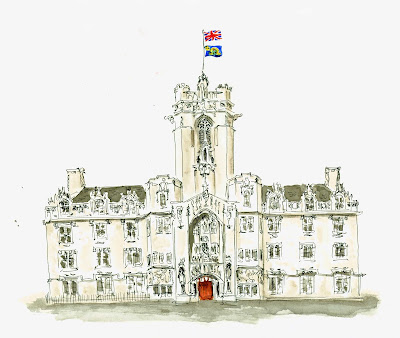 Then, would I draw the building? I've got an unfinished sketch (a preliminary drawing for the cover of my harrowing exposé, The Supreme Court: A Guide for Bears), so I rub out my furry friends and continue. To allow a clear view I ignore a tree and the stone benches guarding the front.

I'm asked if the court is a little, erm, left-leaning. It's a fair cop - I have a strong left-handed curve. The original is above; in the Yearbook the court has shifted to the right. 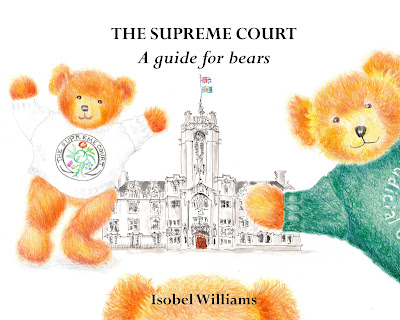 The UK Supreme Court Yearbook, Volumes 1-8, published by Appellate Press, is available from bookshops including Wildy & Sons and online retailers. The latest issue has a sketch of Miller, the Article 50 appeal, by Robin Sukatorn, whose book Drawing Democracy is out this month.
Posted by Isobel Williams at 21:38 No comments: