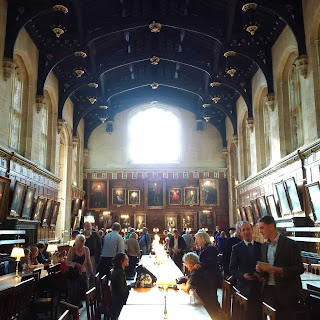 As cover versions go, Verdi's Falstaff (libretto by Boito) has the edge on Shakespeare's The Merry Wives of Windsor, knocked out to gratify the whim of Queen Elizabeth I. The RSC's current production is indebted to Barbara Windsor, Benny Hill, and the triumph of Essex (not the Earl) on reality TV. The cast go hell for leather and don't bother to mine it for Lear-like pathos. Costumes are a clever blingy mock-Tudor. There is a cute toy dog. I'm pleased to see they are recycling the throne from their last history cycle.

What can Read Not Dead, Globe Education's Leverhulme-funded early-modern resuscitation team, do with a less performable text? Samuel Daniel's The Queen's Arcadia, another play written for royalty (King James I's consort, Queen Anne of Denmark), was first performed in the blurry acoustic of Christ Church hall, Oxford, in 1605.

Think Love Island without the profondeur. There are lovelorn nymphs and shepherds (one suicidal), slick poetry by the yard and a section about the evils of smoking designed to flatter King James I, author of A Counterblaste to Tobacco.


On a CPR course I was mortified to break five ribs on the dummy but the trainer shrugged... And Read Not Dead's bone-cracking techniques are what's needed to keep the patient alive. They scamper through the text before the public performance, then they read for their lives, moving as much as they can in limited territory, improvising to get out of scrapes, galvanised by currents of mutual support. Their risk-taking provides the drama when the text sags.

All the cast had the enlivening qualities the loyal Read Not Dead audience expect: I particularly liked David Collins and Colin Blumenau as the 'ancient Arcadians' propping up idealism, John Hopkins and Sid Sagar making the best of the stock 'funny' doctor and lawyer, and Ross O'Donnellan for a breath of fresh air and cute-toy-dog-handling skills as the shepherd Carinus. The programme note makes a brave attempt at spelling dastardly ('darstedly').

Also in 1605, away from theatricals, seething religious divisions built up to the gunpowder plot. Nowadays the country is riven by the disastrous cult of Brexit. Christ Church has provided more British prime ministers than any other tertiary institution so, in hall, portraits of Eden, Gladstone, Douglas-Home, Lord Salisbury and others too numerous to mention look down on the political shambles. The sunlight hitting the glass over the paintings picks out over-generous traces of cleaning product, perhaps Windolene, applied vigorously by someone right-handed.

Nothing catches my heart more today than seeing shepherd's purse in the pavement opposite Worcester College: 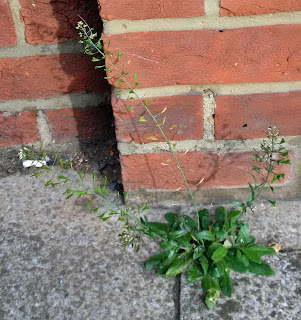 
- From Sheep-crook and Black Dog, English folk song
Posted by Isobel Williams at 15:52 No comments: 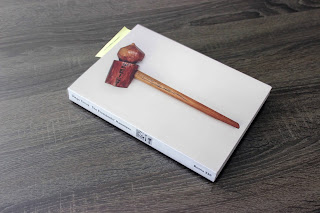 Posted by Isobel Williams at 18:24 No comments: