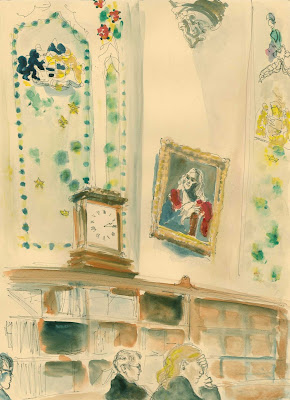 We've been together now for forty years,
An' it don't seem a day too much:
There ain't a lady livin' in the land
As I'd swop for my dear old Dutch.

That's from a tear-jerking music hall song. The impoverished pair are being parted - not by death, but by the workhouse. Segregation of the sexes was the rule, even for elderly married couples.

The Department for Work and Pensions now operates a reverse imposition: that a couple needs only one bedroom, despite the fact that swanky developers are increasingly building twin master bedrooms.

Today's hearing is looking at bedroom tax, including the needs of people with live-in carers and couples who sleep apart. I'm inevitably reminded of window tax (imposed from 1696 to 1851) and the well-known dodge of bricking up windows. 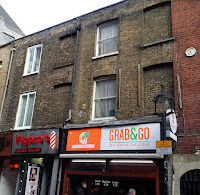 There are - possibly - some examples of this [left] in Strutton Ground, a cobbled street near the Supreme Court. Without a lot of poking around, I can't confirm that these were bricked up for tax avoidance, but the buildings are from the right period.

Maybe the Government could tax extravagant residential basement developments rather than count the bedrooms of people on low or no incomes.

In court I'm sitting next to the Vicar of Dibley - the real one, the Rev. Paul Nicolson, who gave permission for the TV series to be based on Turville in Buckinghamshire, his parish at the time.

Paul is a dedicated campaigner who founded the London-based charity Z2K: its declared purpose is to fight the causes of poverty and help vulnerable debtors to gain justice against unfair systems.

I've blogged about Paul a couple of times before, at the Occupy protest camp outside St Paul's cathedral, so let me dip into the archive:

He refused to pay the poll tax because he believed it was an injustice to the poorest people, but it was docked from his pay [as a vicar] anyway. 'I told the Church Commissioners they should be involved in civil disobedience like I was. I got a very short answer.'

I sit there drawing Paul while he fidgets, scribbles notes and (very quietly) huffs with exasperation. Paul is facing a five-figure legal bill for his latest test case, fought (and lost) on behalf of people in need. 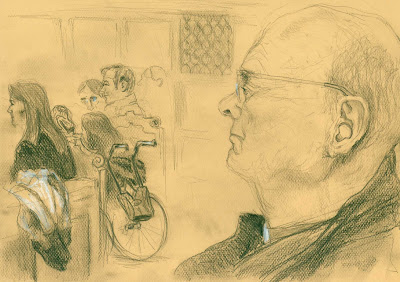 As always in Court 1, the portrait of the super-magistrate Sir John Fielding, blinded at the age of 19 by eighteenth century surgical techniques, looks down on proceedings. 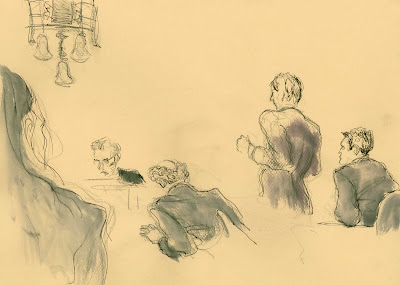 There are a lot of people in the public seats today, all of them very attentive. The one swigging a soft drink from a can is a solicitor. A courteous guard allows her to finish then politely takes it away.

Posted by Isobel Williams at 20:16 No comments:

Supreme Court: the sands of time 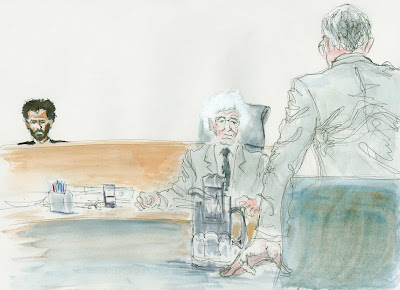 Wait for low tide. Put the strongest man on the best horse and send him to throw a javelin far out to sea. Where it lands will mark the extent of your holdings offshore.

It's not so simple now.

'My lords, there are many balls in the air,' begins counsel.
'And in the water,' says Lord Neuberger.

Lynn Shellfish Limited and others v Loose and another is a dispute over what the Aldeburgh poet George Crabbe called 'shelly sands'. Norfolk fishermen are in court. 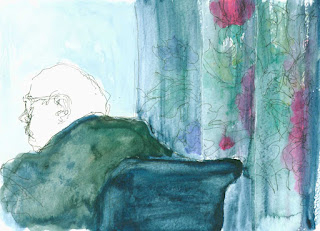 Is Lynn Shellfish entitled to harvest the molluscs on certain sandbanks on the Eastern Wash? How do you measure low tide? What is the legal effect of siltation, which joins up sandbanks over time? Today's incantatory phrases are time out of mind, time immemorial, in living memory.

And what could be more English than a case which considers the position in 1189 (the date of Richard I's accession, an anchor point for proof of unbroken possession)? And a QC called Guy Fetherstonhaugh? If you're reading this aloud it's pronounced Fether - ston - haugh, not Fanshaw. 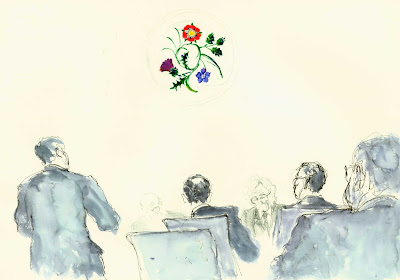 Admiralty law comes and goes with the tide. Lord Sumption beams. He is in his element, mediaeval history.

There is mention of a duty of one farthing. And nostalgie de la boue: 'We all like the cases best we were in as counsel,' says Lord Clarke.
'Provided we won,' says Lord Neuberger.

The documentation is adrift. Bundle grumbles worsen when the bench turn to confusing colour-coded charts of the contested shore.

'My lords, the chart is the wrong way up.'
'Excellent,' says Lord Neuberger. 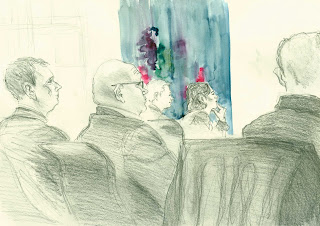 My pencil vanishes in a Bermuda triangle. I search for it anxiously while pretending not to.

'What is stubborn sand?' asks Lord Neuberger. Counsel says it hugs the coast.

'The cockles are all wild, are they?' asks Lord Carnwath. Counsel agrees, then admits he does not know how they reproduce. 'Never mind,' says Lord Carnwath, 'I can look it up on Wikipedia.'

In the lunch break the usher tells me about an anti-fracking demo outside. I wonder if Tina Louise Rothery is there, a dedicated campaigner who stood for the Green party against George Osborne on an anti-fracking ticket. I met her when I was doorstepping Occupy out in the cold (see this blog). 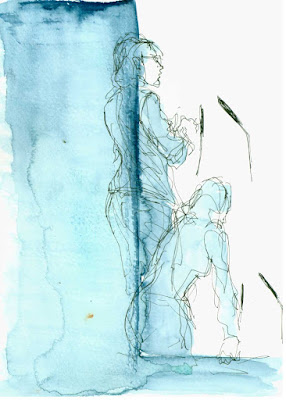 Dominating the charcoal ranks of lawyers, the national flowers on the velvet wall hangings are thorny and squirming, designed by Timorous Beasties who aren't afraid to splash their florals with blood if the brief allows. I think of Crabbe's humanoid plants on the unforgiving East Anglian coast:

On hills of dust the henbane's faded green,
And pencill'd flower of sickly scent is seen;

Here on its wiry stem, in rigid bloom,
Grows the salt lavender that lacks perfume.

At the wall's base the fiery nettle springs,
With fruit globose and fierce with poison'd stings;

In every chink delights the fern to grow,
With glossy leaf and tawny bloom below:

The few dull flowers that o'er the place are spread
Partake the nature of their fenny bed.

These, with our sea-weeds, rolling up and down,
Form the contracted Flora of our town. 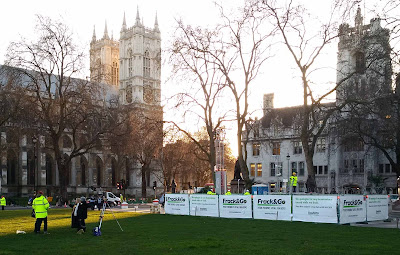 Towards dusk I go out to Parliament Square. Greenpeace are staging one of their orderly spectaculars, a fake fracking station manned by protesters in high-vis jackets.

I see her standing out in the middle, by the last yard of sun, giving yet another media interview. 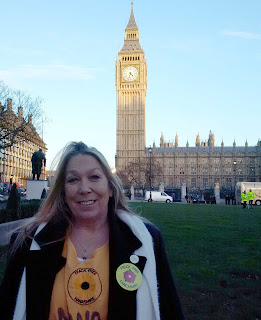 I'd been painting the Tudor rose of England today as part of the Supreme Court emblem; here it is again on Tina's badge. 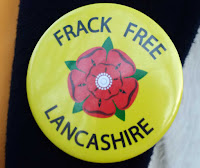 Views are my sitters' own. If I'm making any factual mistakes please let me know.
Posted by Isobel Williams at 19:59 No comments: