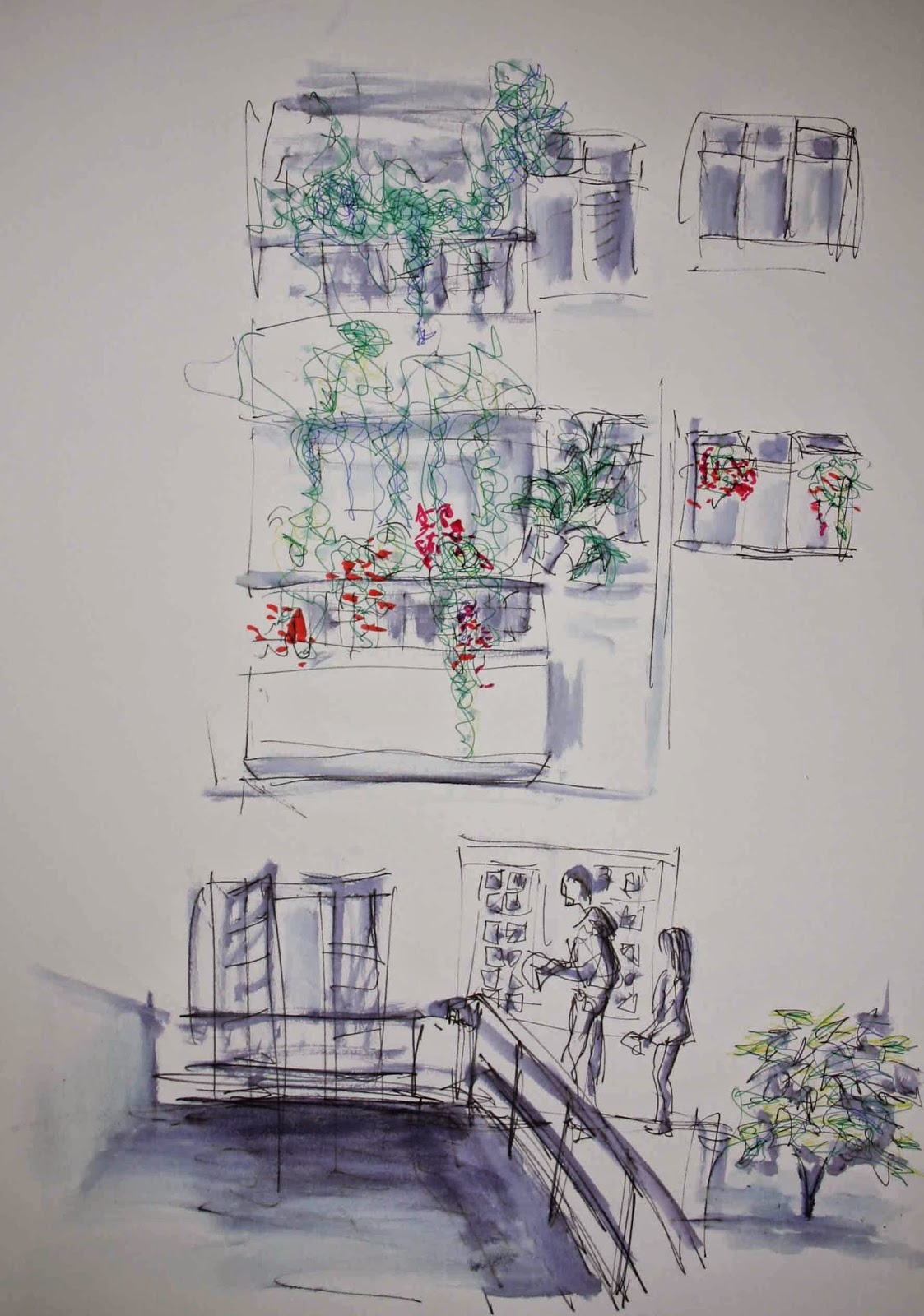 There's a baby Magnolia grandiflora in the communal garden with just one citrus-scented blossom the size of a dinner plate.

This is an unusual choice for municipal planting so close to a dwelling: its natural ambition is to reach 90 feet, so if left unchecked it will obscure light from this listed Modernist building on Ladbroke Grove originally known as 'the sunshine flats'.

Teams of cheerful, un-sweary teenagers are slapping magnolia paint on the walls of a room in Kensal House community centre and washing down exterior walls ('A spider! Aargh!'). If you're a magnolia denier, then by all means get 'Tallow' from Farrow & Ball if it makes you feel better. (My previous endurance-drawing visit to Kensal House is logged here: http://isobelwilliams.blogspot.co.uk/2013/12/ghosts-and-theatre-in-plaster-thirties.html.) 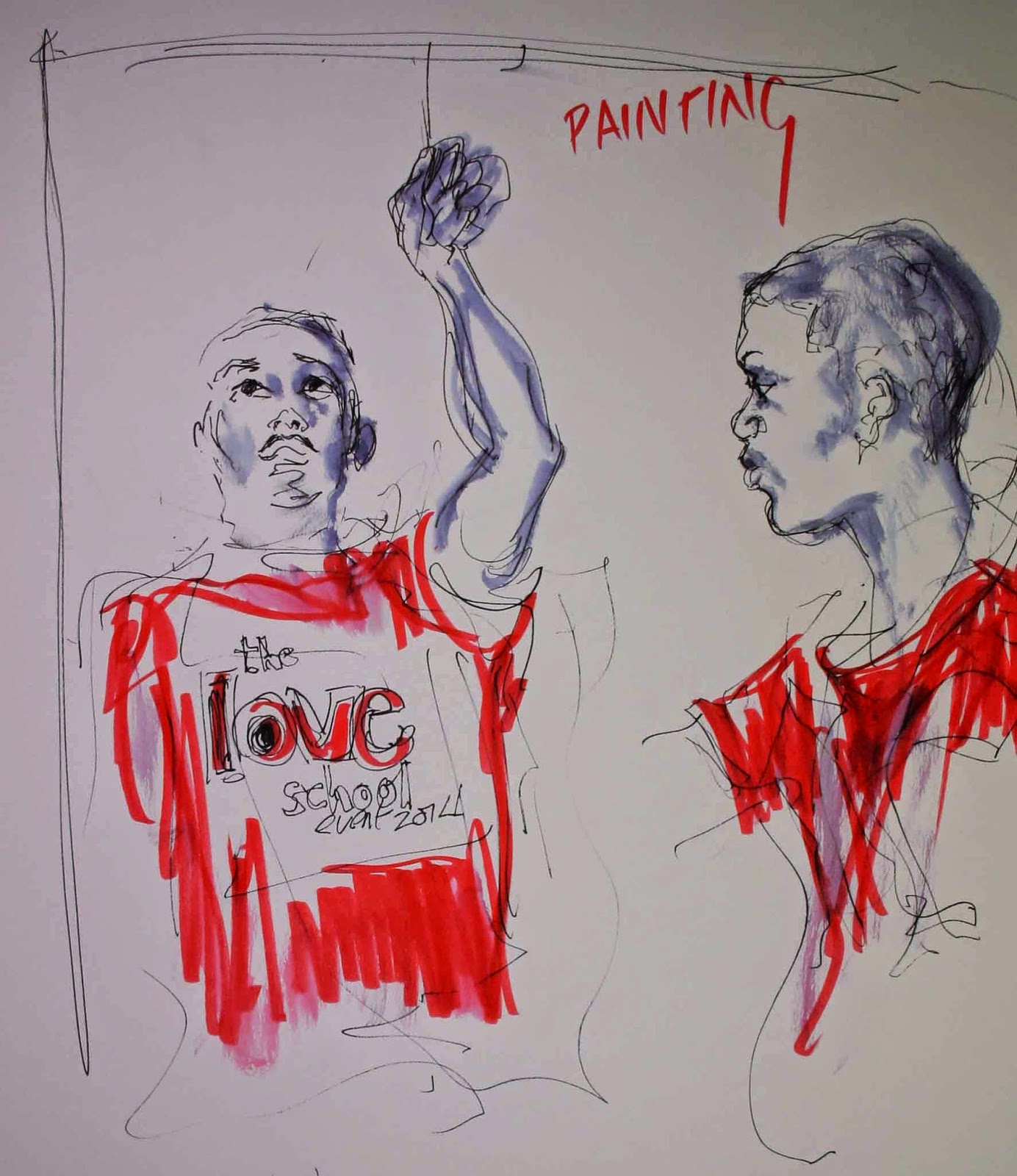 The teenagers are from SPID Theatre http://spidtheatre.com/wordpress/ and NCS The Challenge http://www.ncsthechallenge.org

Afterwards I walk along Portobello Road past jackpot shots in the gambling shop and a stall selling halal paella. I haven't noticed any rancour all day. Back on the street, it doesn't take long. One City type is whingeing to another: 'He put me in the second category of his guests. I don't even care.' Yes you do.

Turn the corner and there's an inexplicable outburst of redundant municipal planting around spindly new trees on the fancy York stone pavement in Westbourne Grove. Including clumps of sage. And please tell me that isn't euphorbia, the sap of which can land you in A&E if you don't know what you're doing. 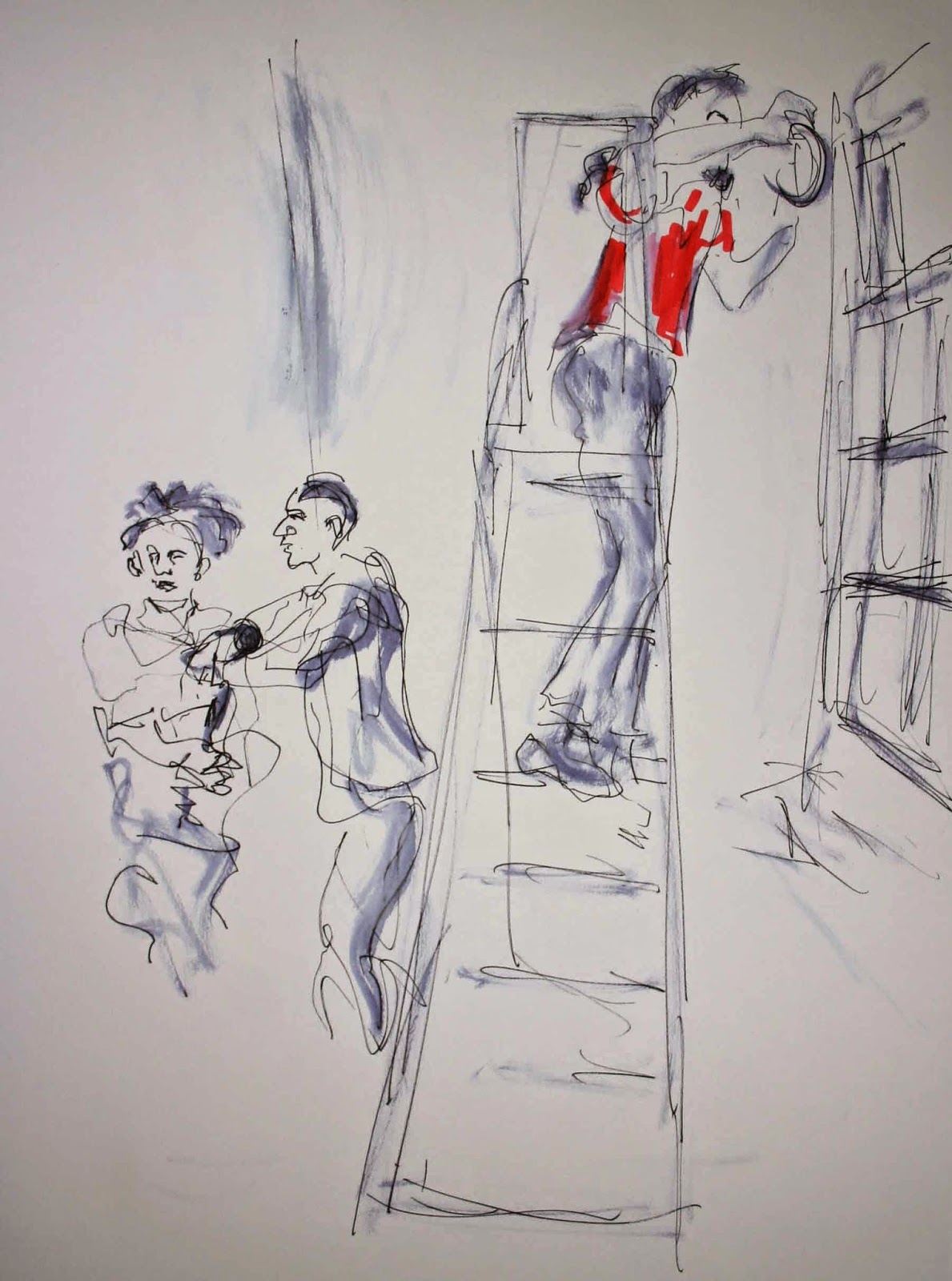 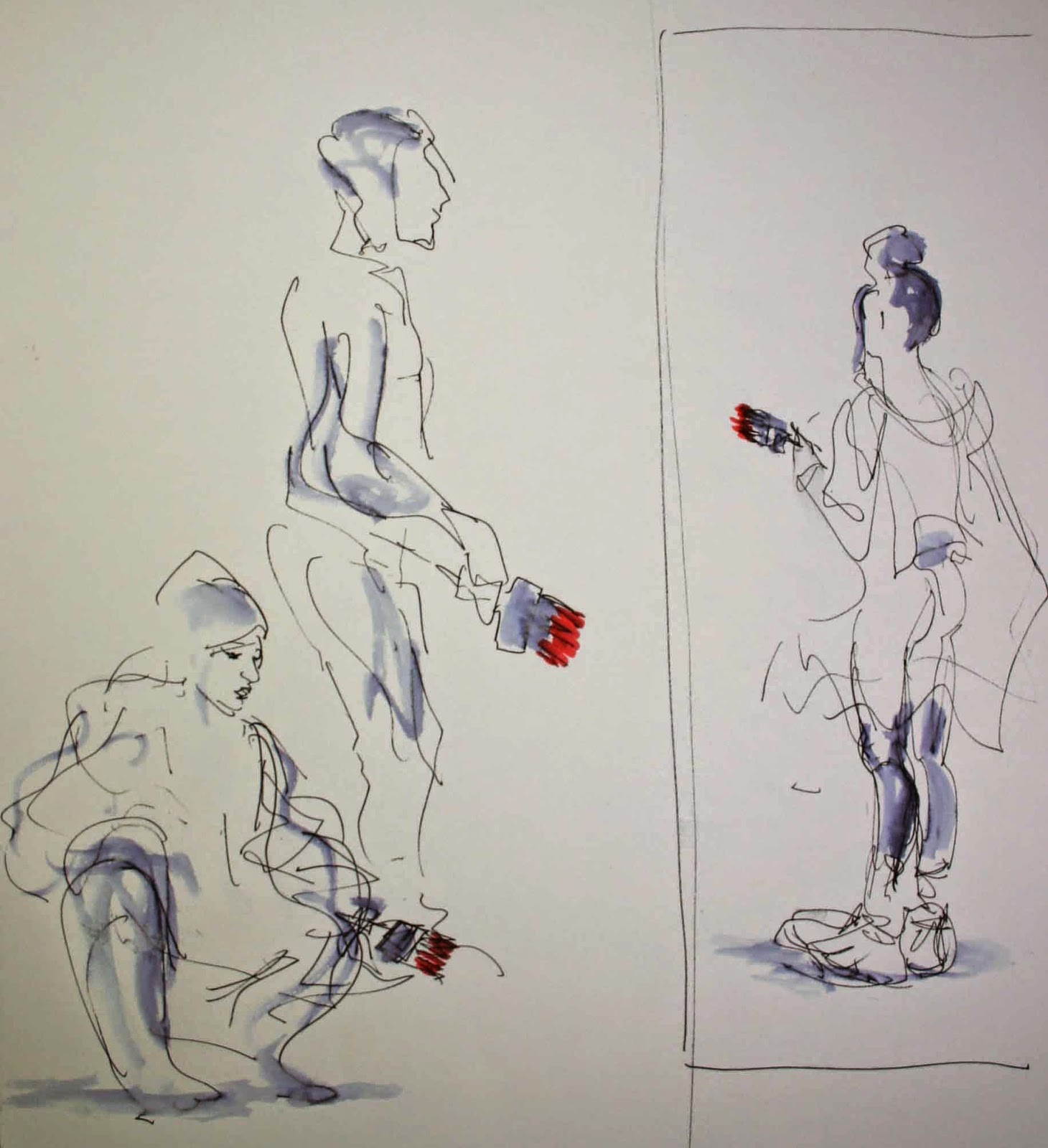 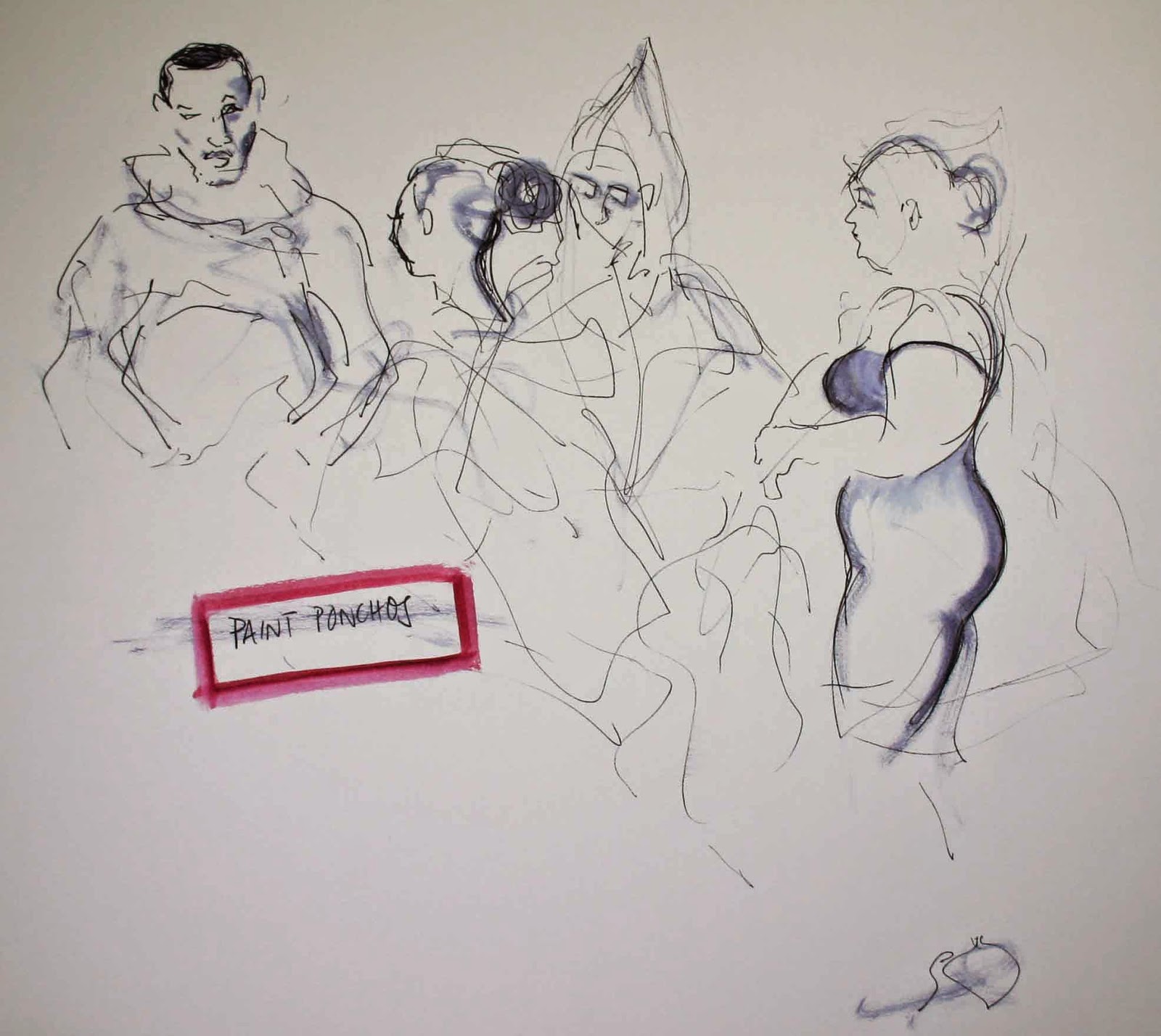 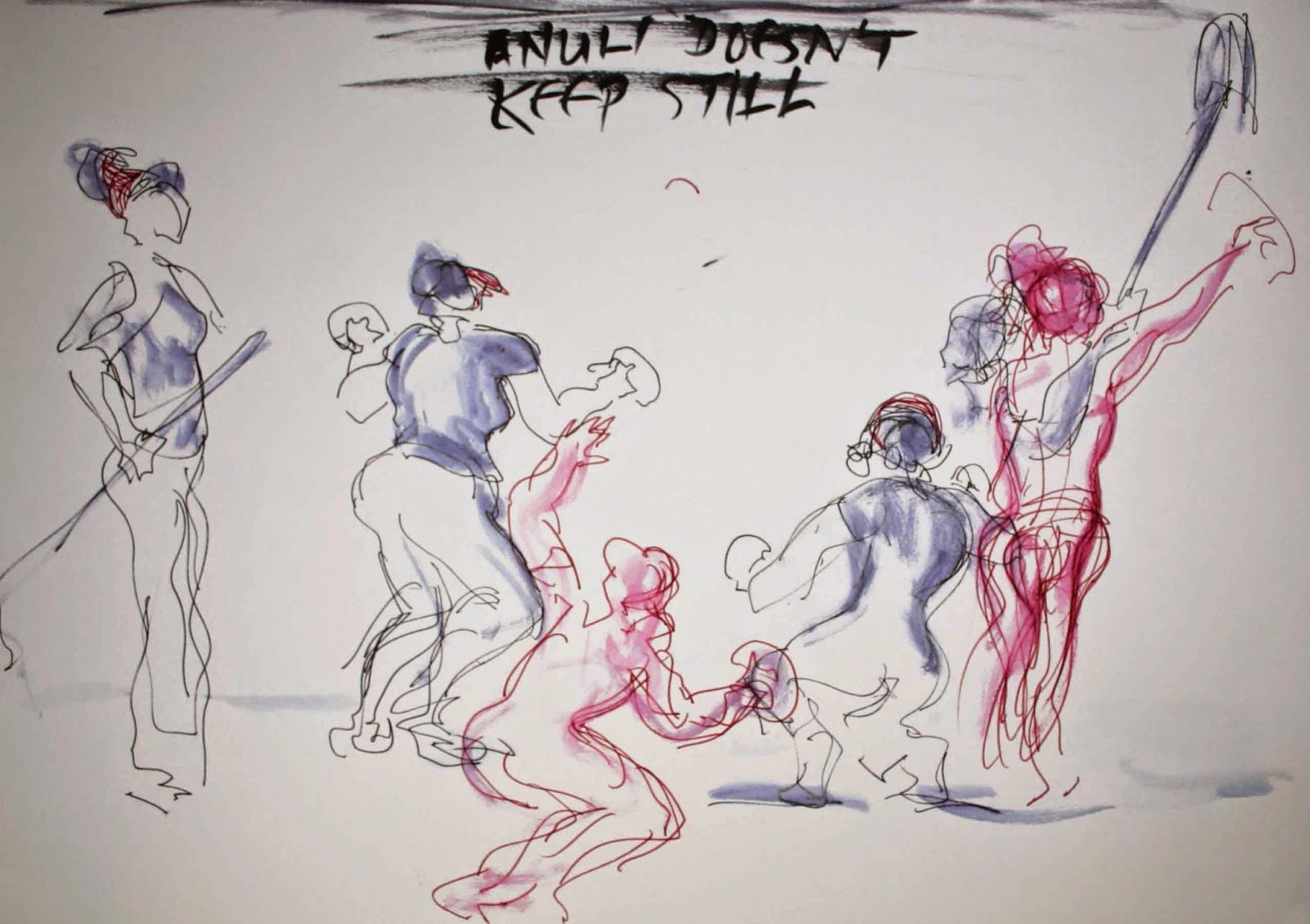 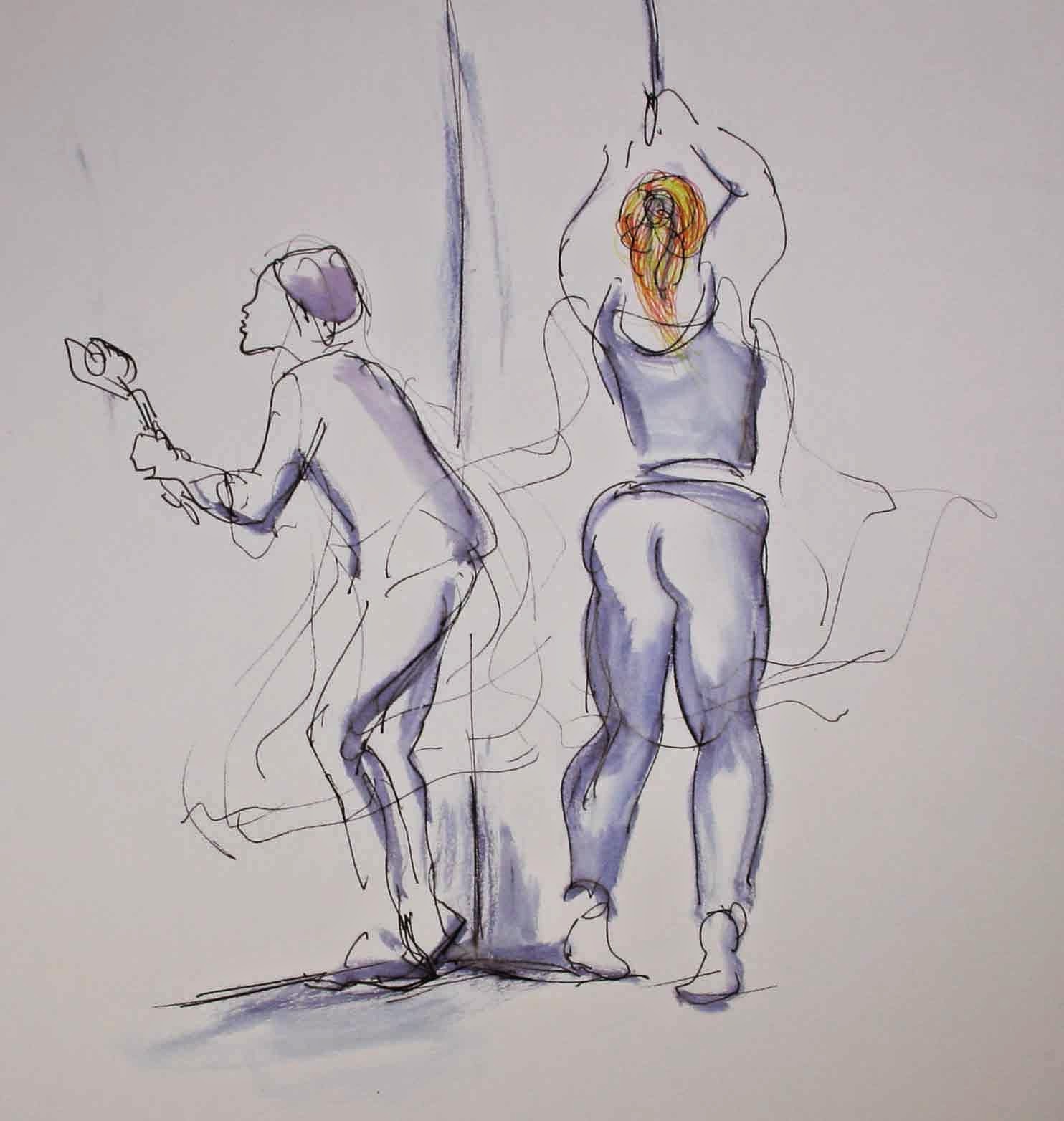 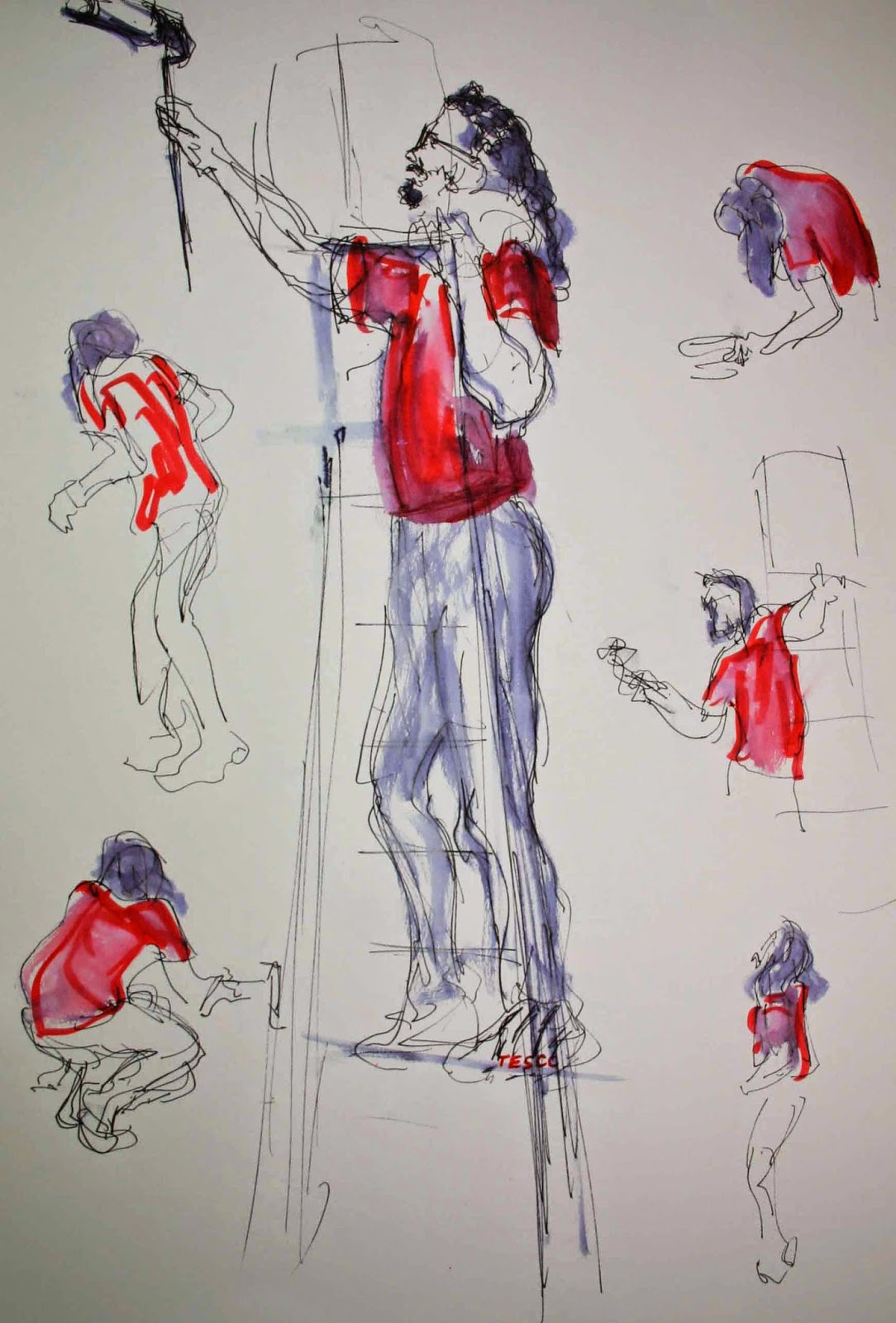 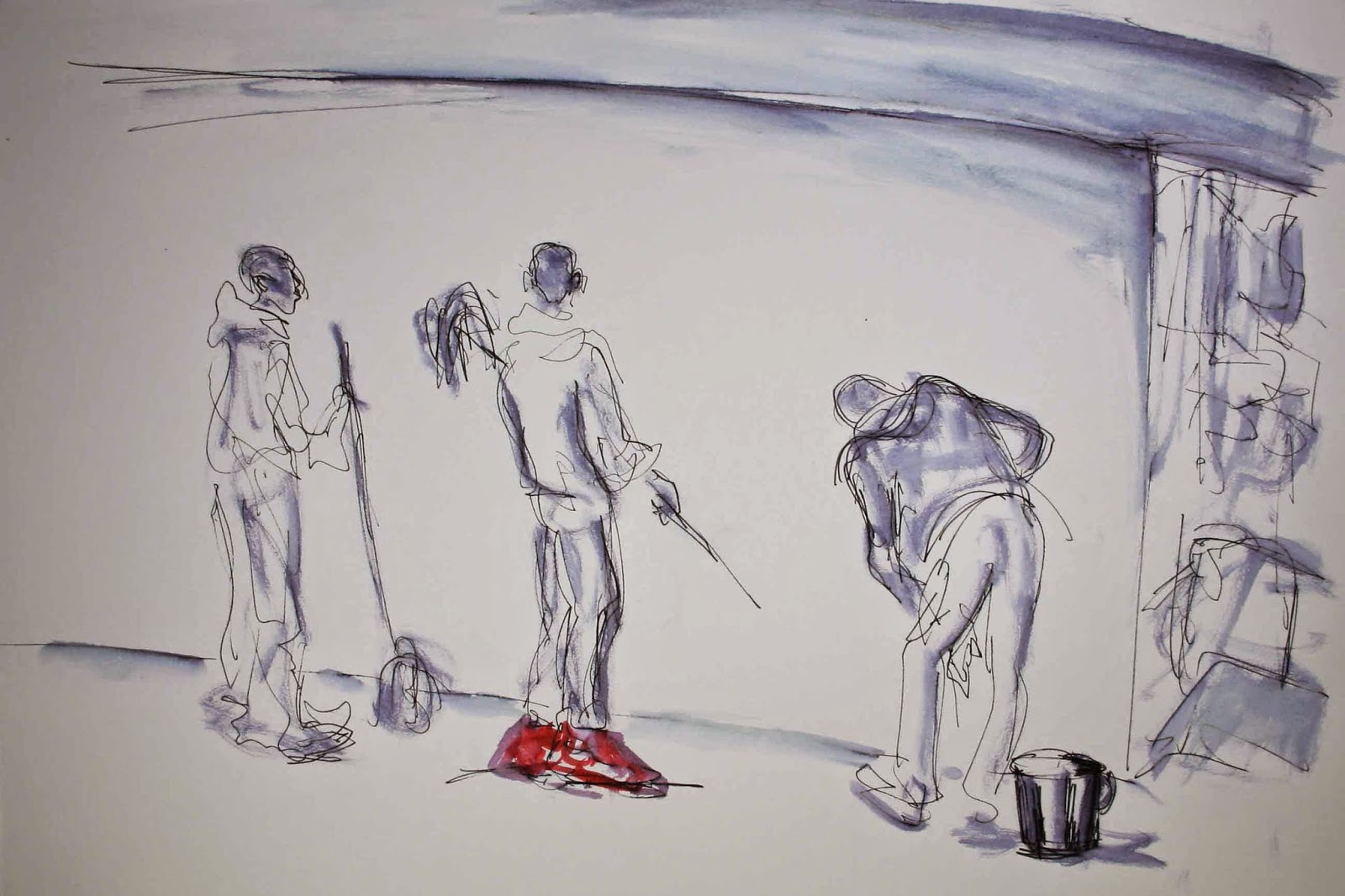 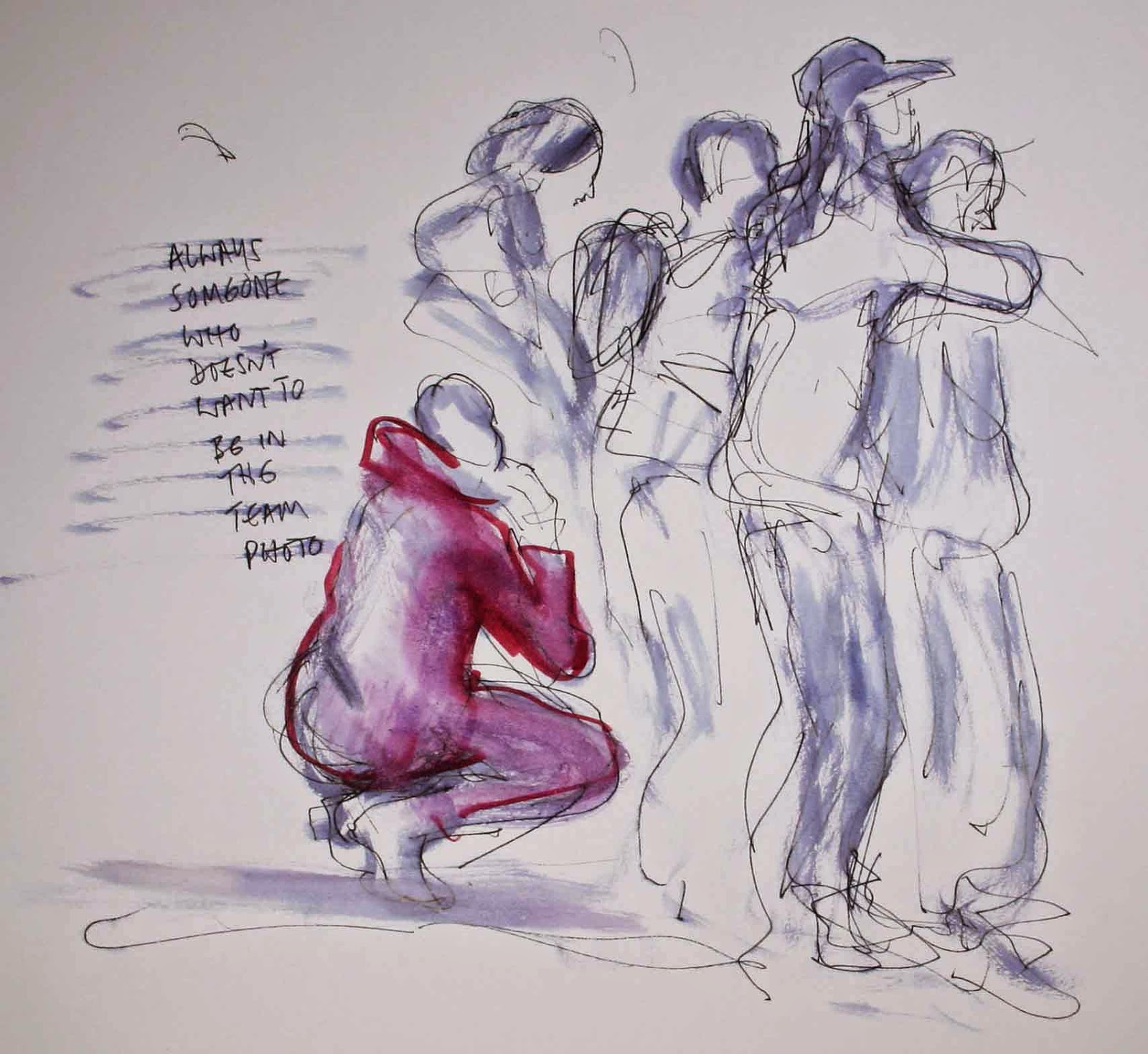 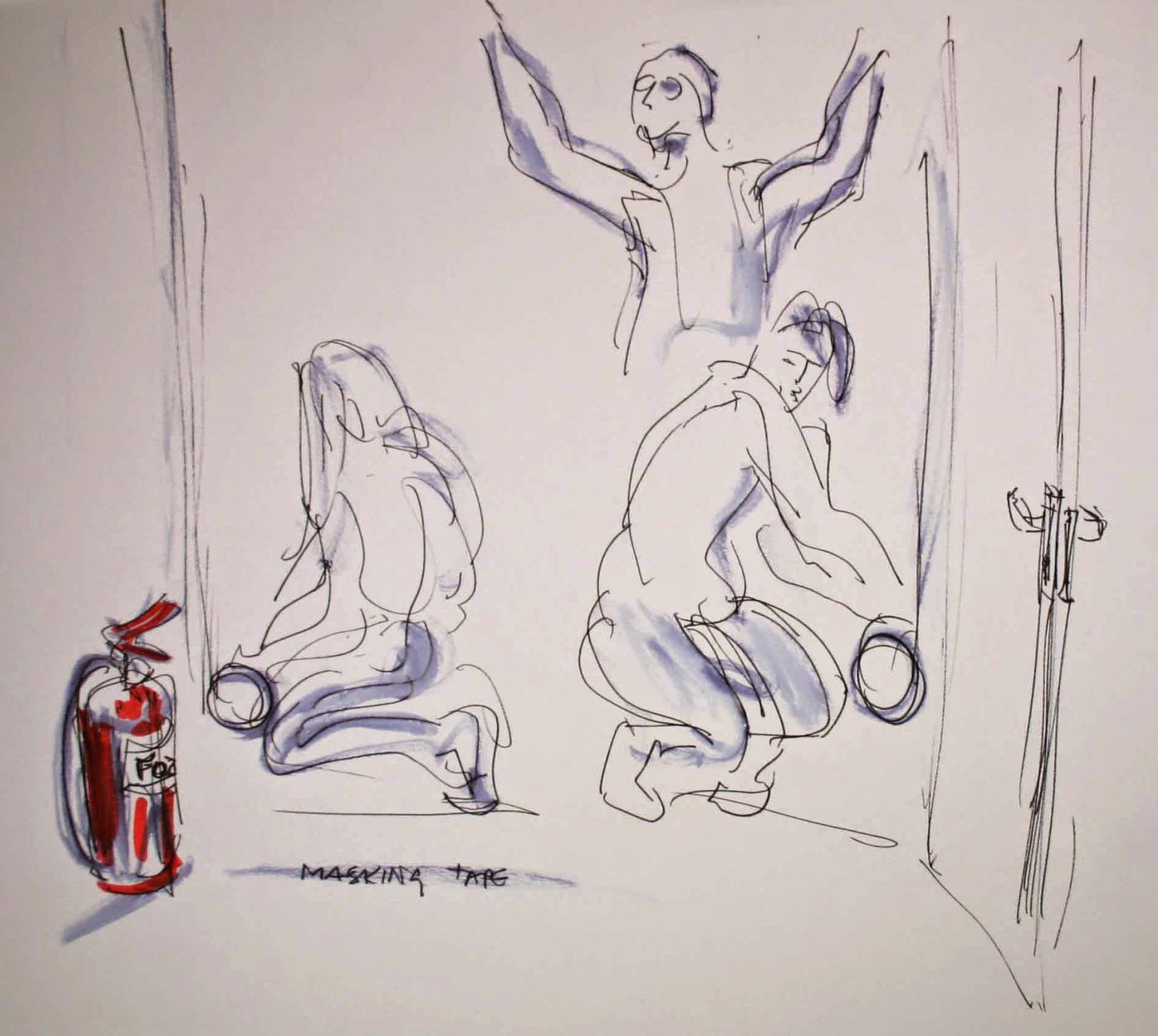 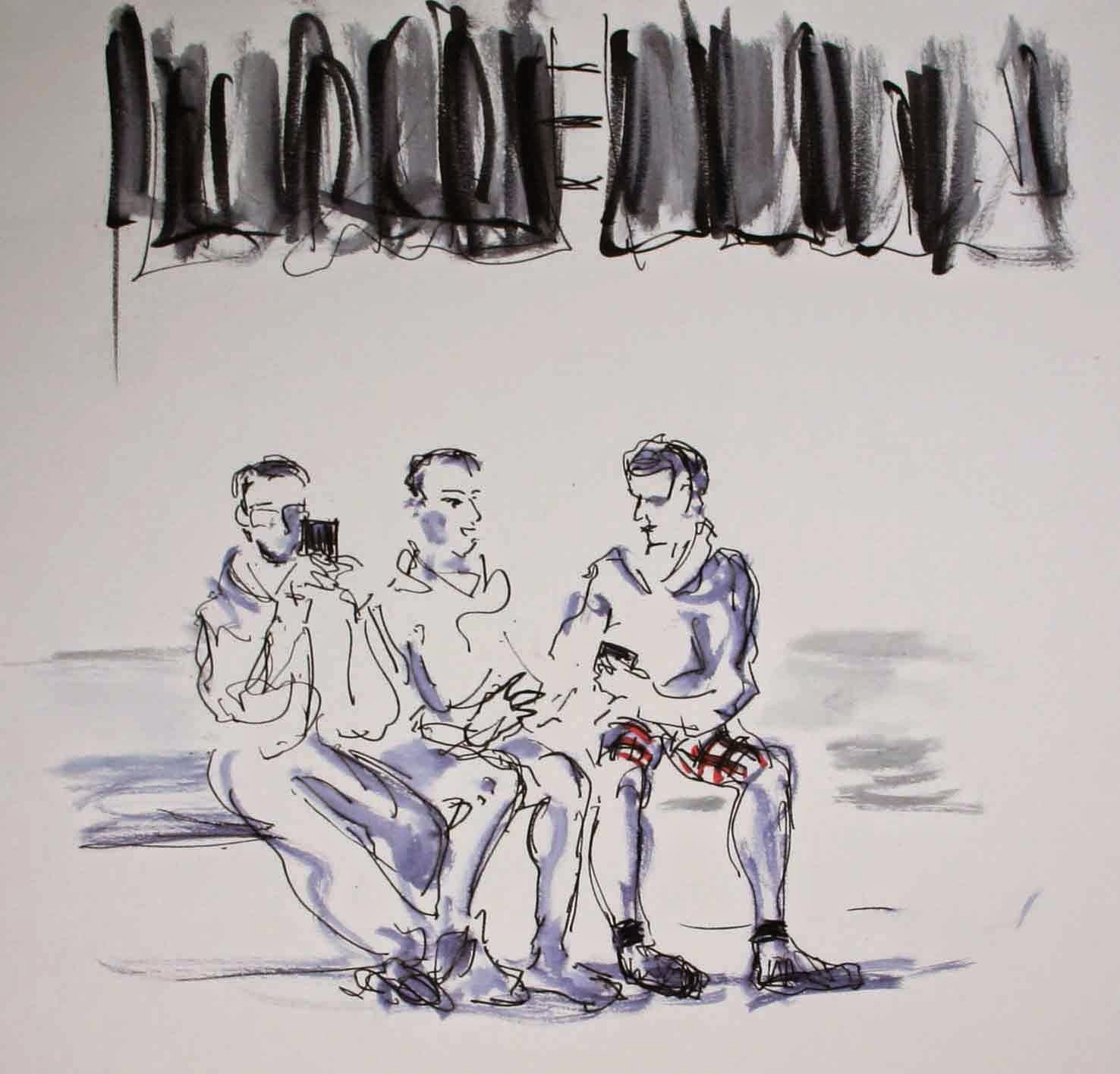 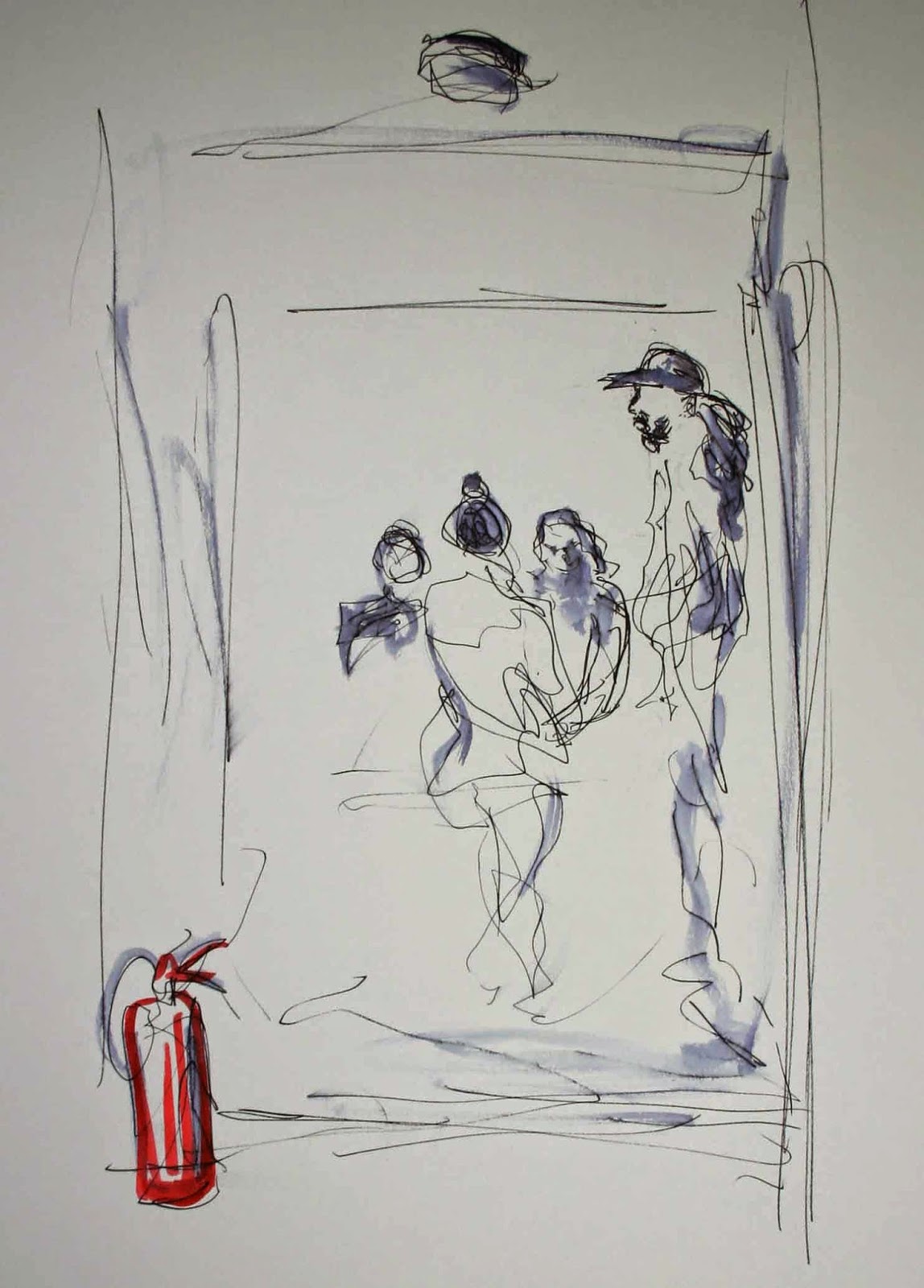 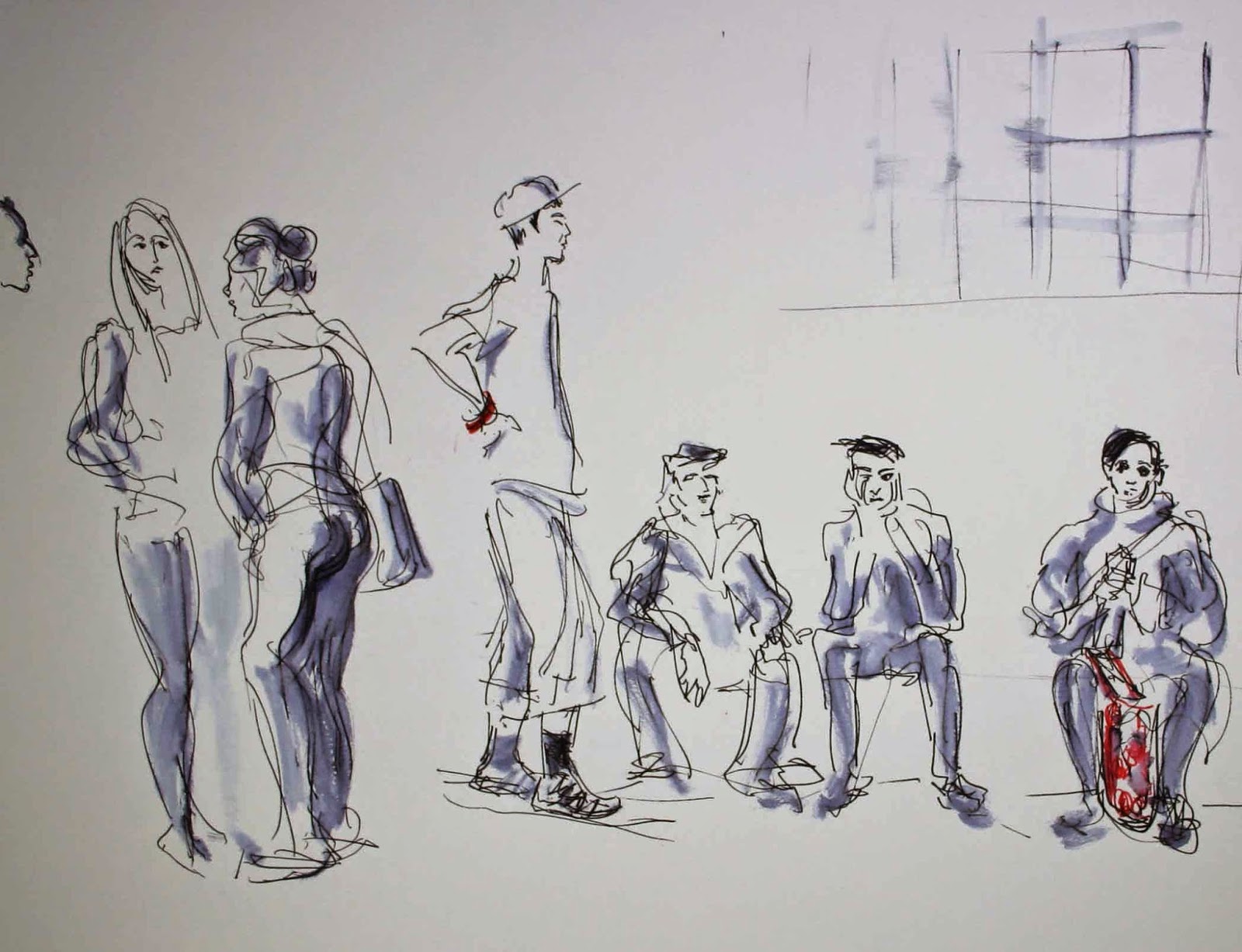 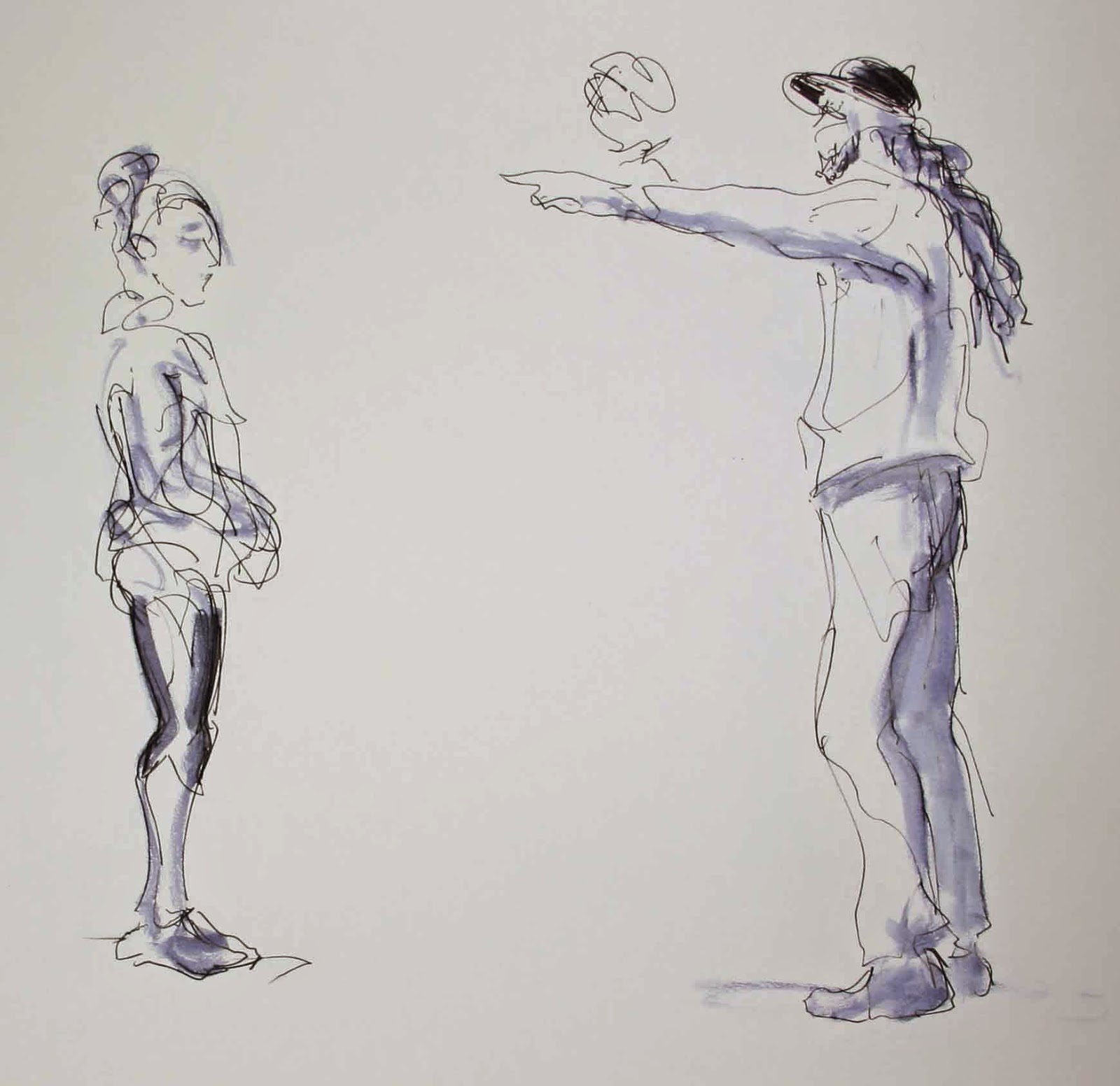 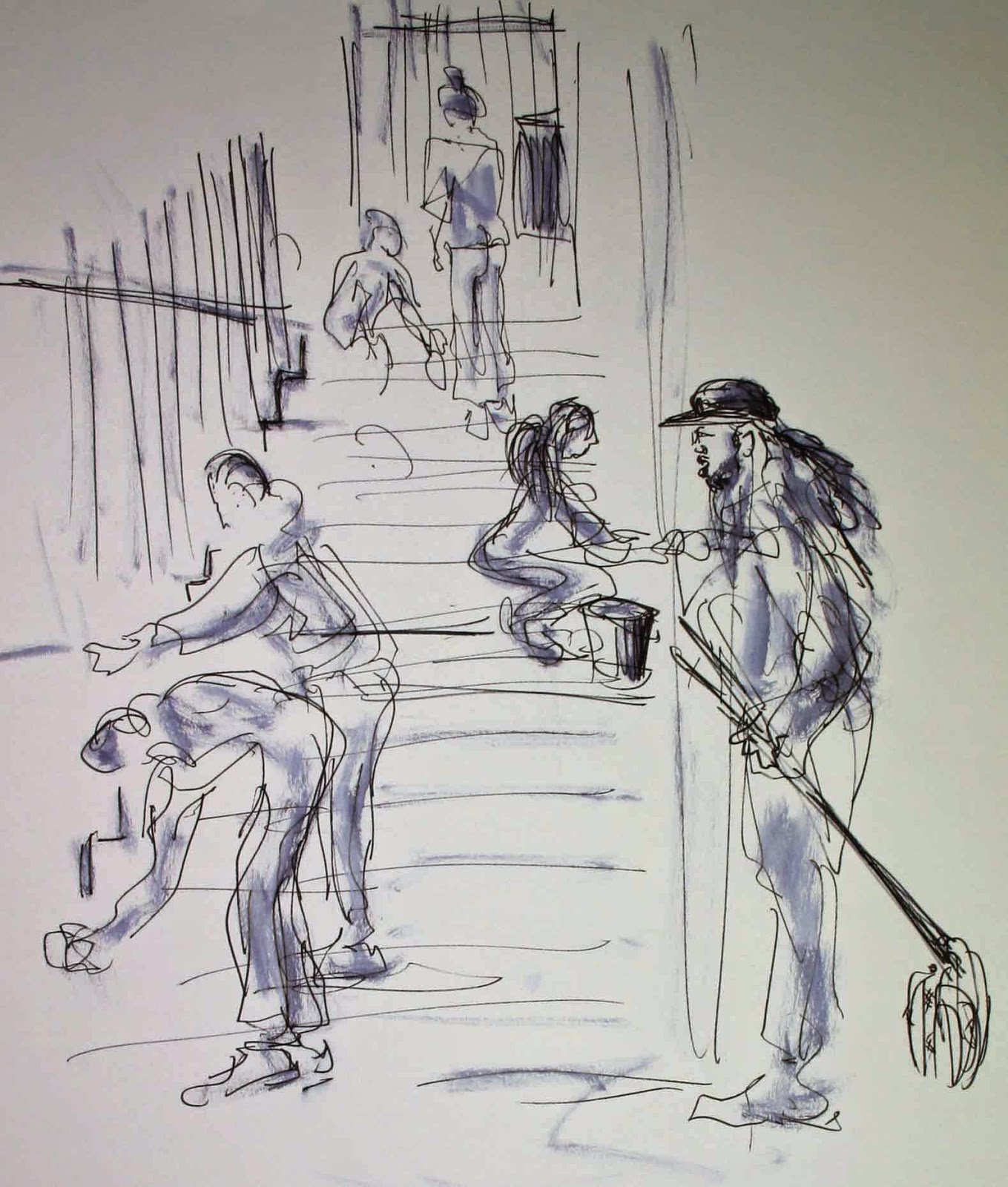 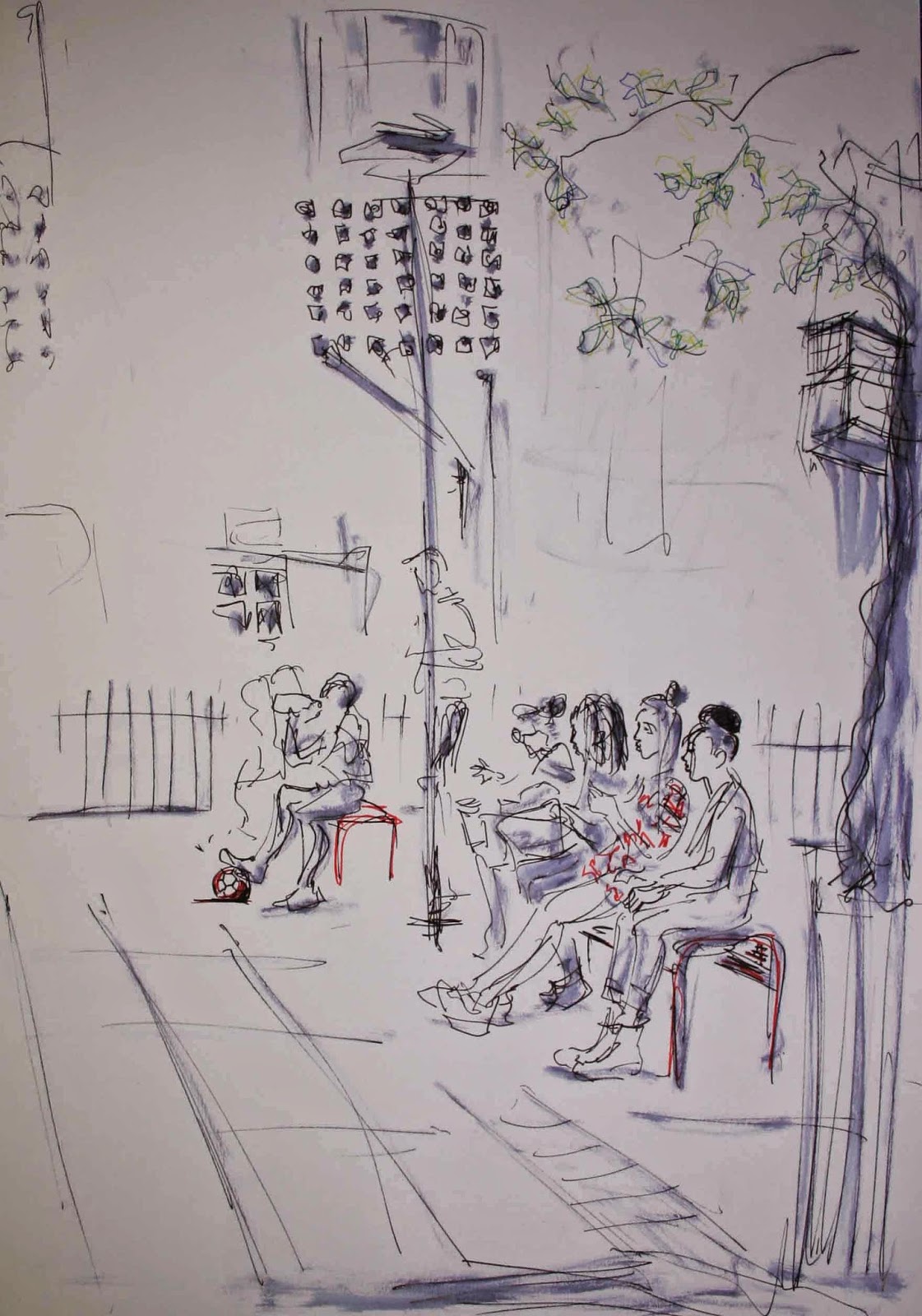 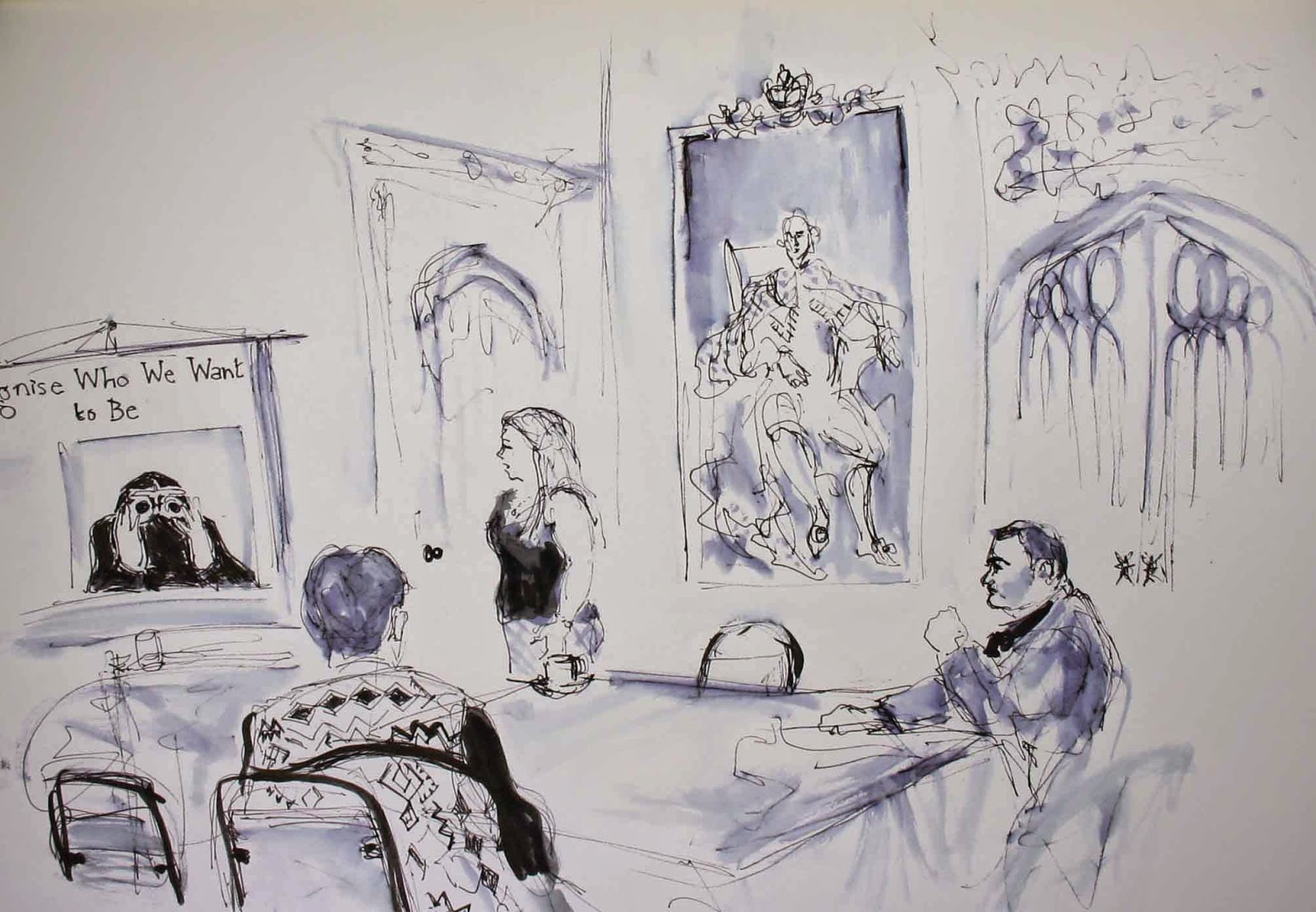 What can you do with a law degree if you don't practise law?

Well, you could ask the senior partner of Alabama 3 ('Sweet Pretty Muthaxxxxin Country Acid House Music'). I stumble across his former law tutor, Professor Chris Harding of Aberystwyth University, at a conference. Who needs a training contract?

The conference, 'Visualising Law and Gender', is at the new Centre for Law and Culture, St Mary's University, Twickenham, in the hallucinatorily gothic setting of Strawberry Hill (described as 'make-believe' by the architectural scholar Sir Nikolaus Pevsner). 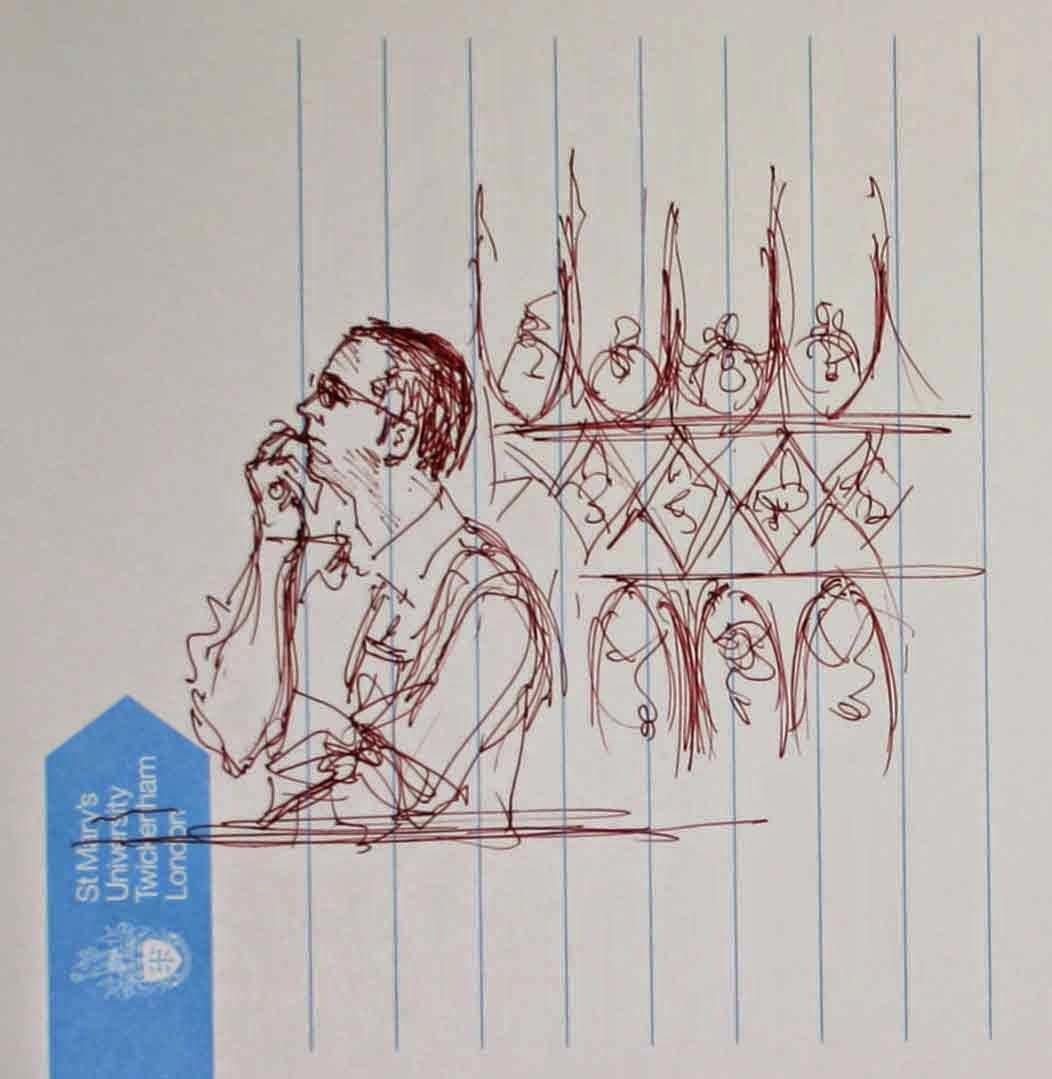 Speakers include legal academics, an art historian from the University of Ghent called Stefan Huygebaert, and moi.

Ermine-enriched portraits of King George III and Queen Charlotte look down impassively while doctoral theses are aired. Bullet points come up on the screen. It's the sort of conference where 'the jurisprudence of buggery' (and presumably vice versa) goes unremarked.

My own talk has been triggered by Baroness Hale's inaugural guest lecture here in June. She began by saying how much she regretted not hiring an eighteenth century woman's wig to wear on her last day on the bench at the Court of Appeal, to make a point about the dress code. (Now at the Supreme Court, she doesn't have to wear antique male garb except on ceremonial occasions - and no more wigs, ever.)

So, off at a tangent I go. What, as Baroness Hale's self-appointed eighteenth century personal shopper, would I have recommended as daywear for that last day at the CA? (The French win.) And what does the history of art tell us about women in the context of justice, given the absence of  judgesses in England and Wales until 1956? If you weren't there I'll go through my PowerPoint again, just for you.

The trip to Strawberry Hill reminds me of the awfulness of commuting. And of the sleazy pleasure of applying make-up in an empty-ish bit of the train. Those little French Bourjois pots of eye-shadow have got a mirror in the lid. 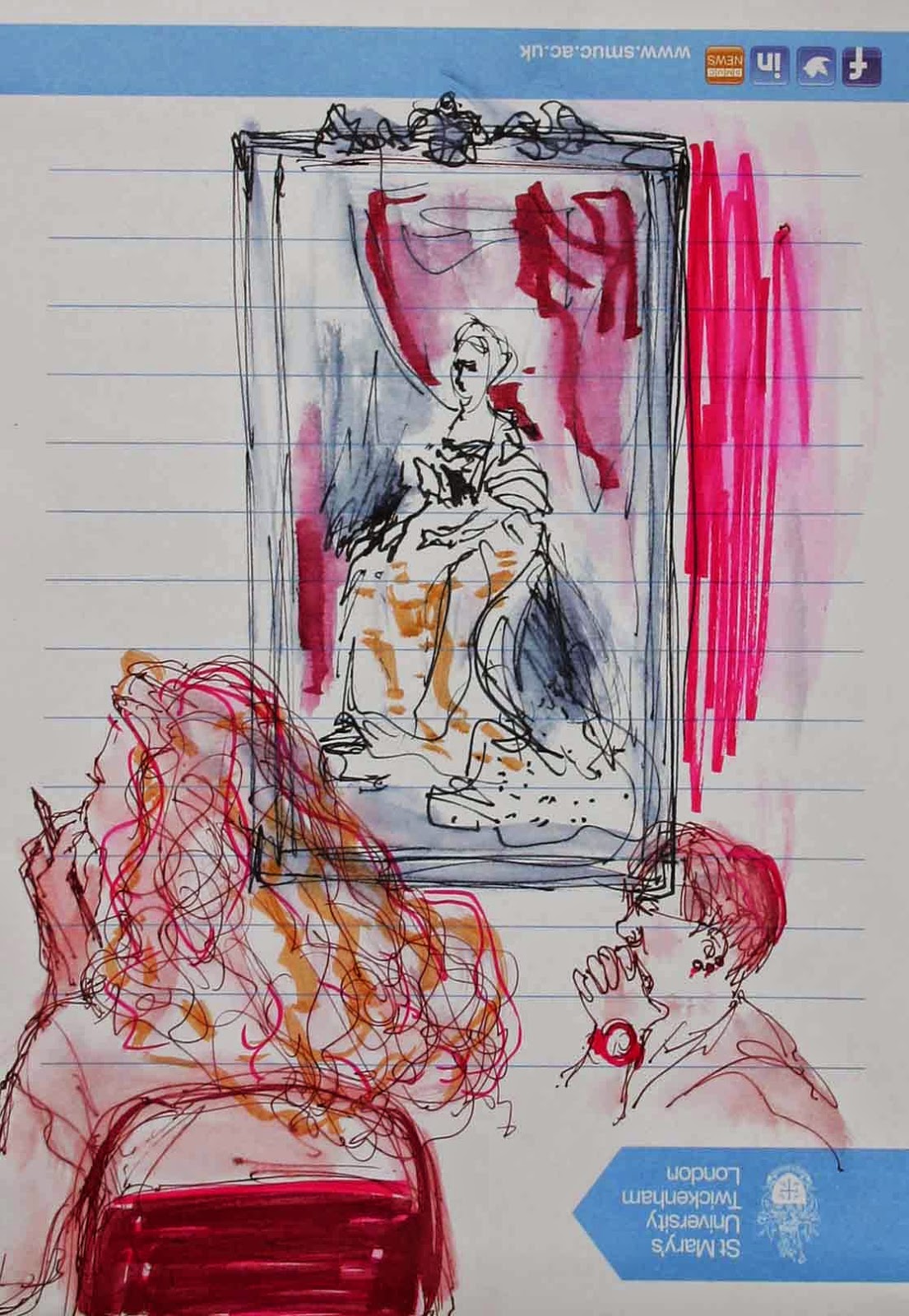 In the evening I go to a Prom conducted by a woman, Marin Alsop, who wears a mannish black suit. 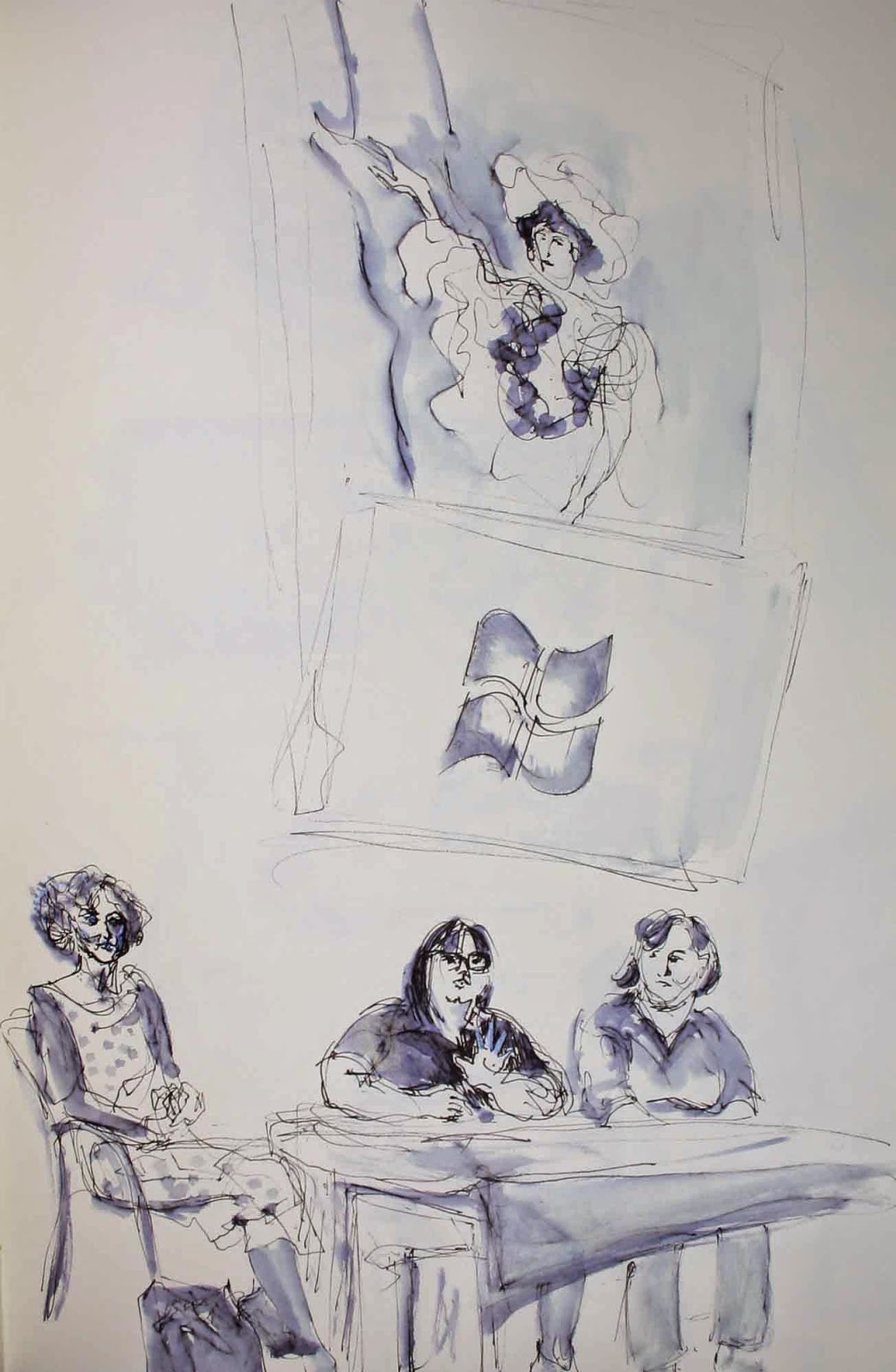 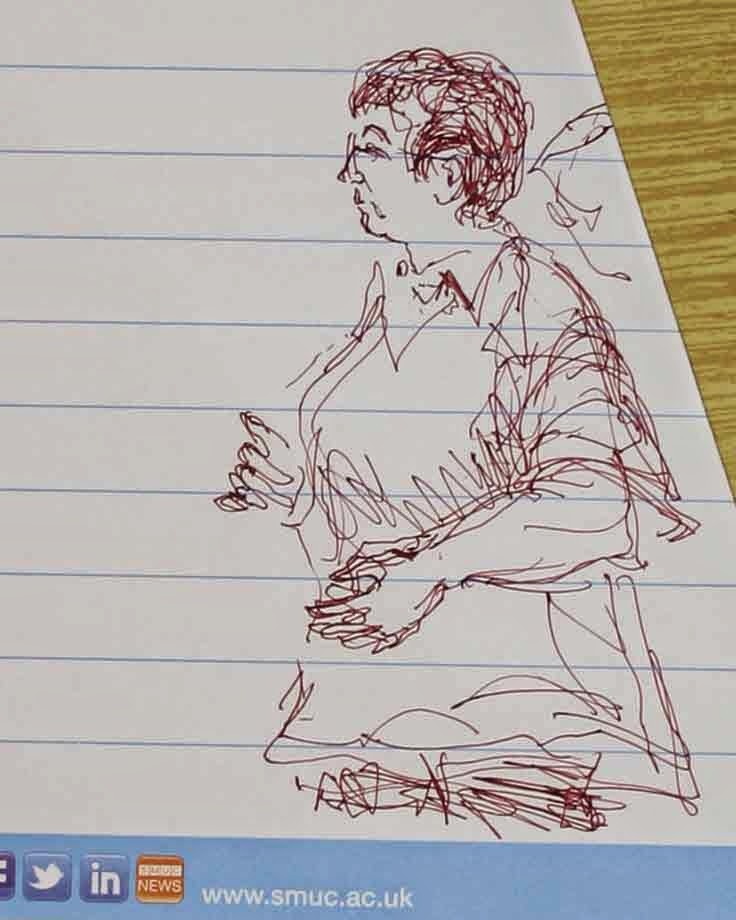 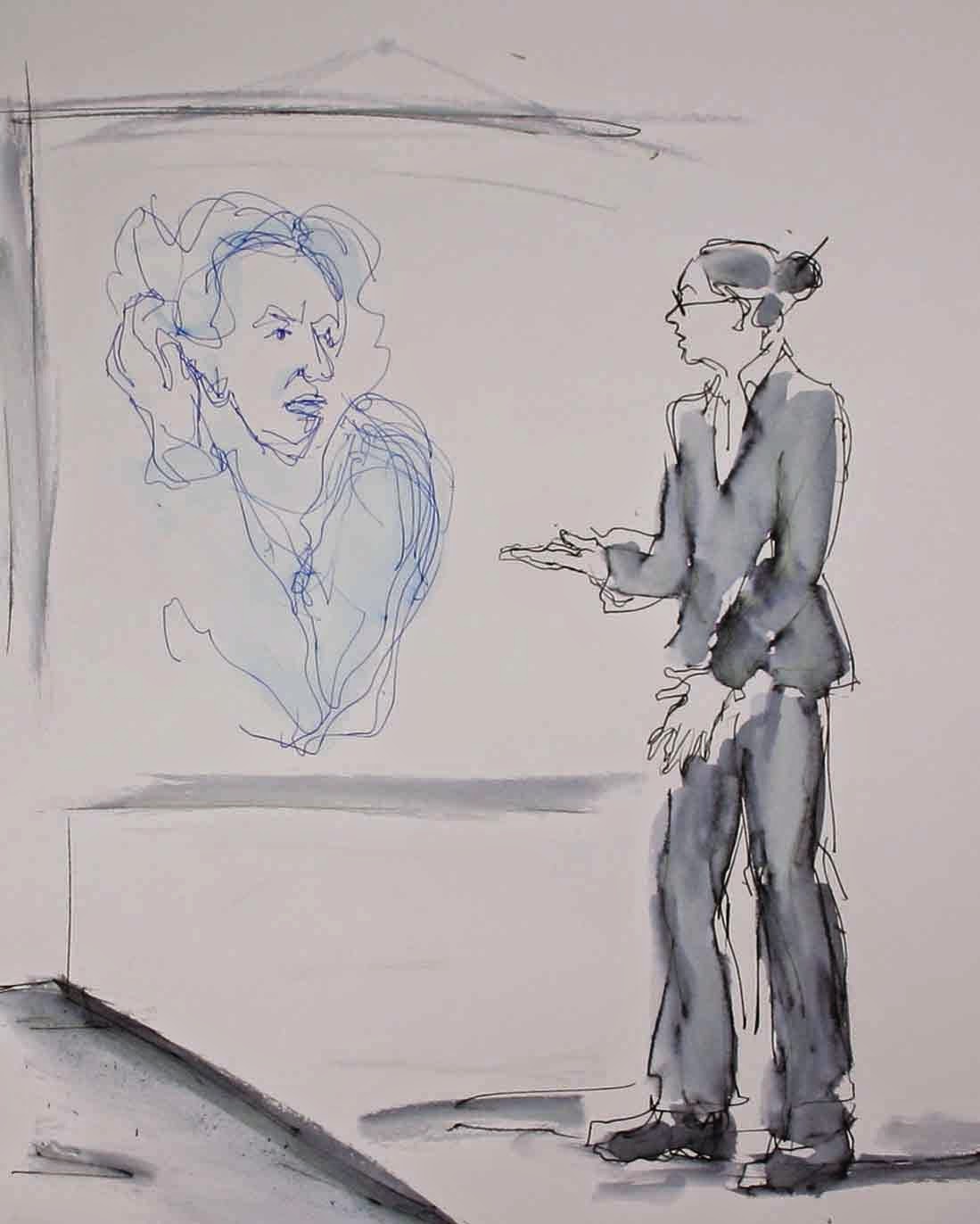 Posted by Isobel Williams at 10:30 No comments: