Drawing inside a courtroom is illegal. As is writing about the proceedings without permission. Pity.

‘How do you spell Fawkes?’ asks the Occupy PR guy next to me. He wants to tweet that it is auspicious that a manuscript from Guy Fawkes’s trial is displayed outside the court where the St Paul's Occupy eviction trial is being held. I quibble over ‘auspicious’ as Fawkes lost catastrophically, but am overruled.

I arrive at the St Paul's camp after dark and end up back in the supply tent with its hellish soundtrack of fortissimo Radio 1. 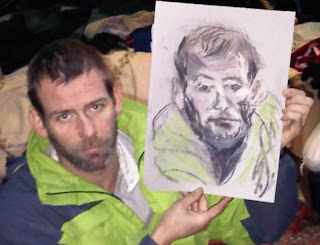 Michael, from Toxteth, works in the kitchen team and the tranquillity team, the camp's peace-keeping force. They tend to be busiest between midnight and 4am, when the broken people of the camp walk abroad.


Tranquillity have walkie-talkies; it was suggested that they should use whistles for emergency help but they rejected the idea. 'I said this isn't 1829 with the Metropolitan Police being issued with whistles,’ says Michael. ‘People will get hold of one and take the piss.'

Michael says he’ll get his picture framed. He's had tapestries framed after doing classes at the Royal School of Needlework - 'I've done landscapes, a Victorian basket of vegetables - very difficult. I'm really into cushion designs at the moment. My partner studied millinery.' 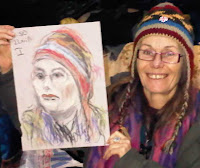 Lilias has laryngitis so can’t compete with Radio 1. As a young woman - I detect a flower child - she was once approached by the Polish artist Feliks Topolski on the Tube: he showed her round his studio under the arches at Waterloo and took her to eat in the National Film Theatre as was. They met several times, platonically, but he never drew her portrait. 'When I was going to the US he gave me the name of the Polish ambassador in Washington but that was all too posh for me.' 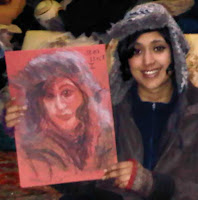 Nafeesa is part of Occupy's criminal investigations unit looking for evidence of banking crimes, and films for the camp's livestream output. 'I'm trying to get my mother to come here. She stopped speaking to me the first week I was here. But there are Bangladeshi freedom fighters so she understands. She says, "I never thought my daughter would be like this. When are you going to get married and have children?" I say, please! I've got more important things to do.'

When I draw a girl whose face glows with beauty, and hand her the picture, she will freeze and her glow will fade for a few seconds. She is used to affirmation from the mirror, not a hesitant yet overworked sketch of something other than beauty. She becomes vulnerable, yet feels that she must wear a mask of politeness. And I don’t know why my heads are getting bigger – larger than life size is pointless. I must rein them in.

Erin, a softly-spoken South African, tall with good legs, clad in the skimpiest bare-torsoed drag in the coldest weather, reached England in 1972. ‘I come here every day to get away from zombies and clones. What are these, pastels?’

Erin picks out a purple chalk and waves it over the picture, wanting to draw in the missing eyeliner, then decides not to. I left out the eyeliner because I felt it would hurt Erin’s eyelids by some kind of sympathetic magic. And I wanted to see what Erin's eyes really looked like. 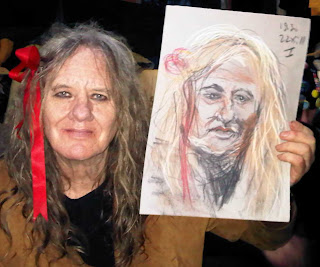 ‘I’ve made so many friends here,’ says Erin. ‘But I go home at night and sleep in my warm bed – I don’t have the dedication and stamina which I’m greatly in awe of. The food here is wonderful. And the movement is fantastic – brilliantly organised. There are endless people full of love. I’m going to cry now.’

I go home on the bus, working out how I would cast the film of the trial. Jeanne Moreau in her prime as Tammy Samede, the named defendant.

Posted by Isobel Williams at 09:13