A marquee and an acid bath

With magisterial slowness I reverse into an empty stationary car, stopping when I hear the splintering of its number plate. This prepares me for the atmosphere of fresh litigiousness on the following day: a matchmaking fair for law students looking to give their skills to charities, held at The College of Law in Bloomsbury.

When I was a student there were trailing rain-sodden skirts, foetid Afghan coats, grants, an assumption of employment. The students in this steamy marquee are sharp-eyed: experience from volunteering will help them get a job.

I'm on the fringe of Z2K, which guides vulnerable people who fall into debt and campaigns for changes to benefits law. Maev, a Z2K trustee, is running the stand with energy and grace. When she needs sandwiches or photocopies she fails to pull rank, so I make her sit down again before I go and get them.

Maev won international distinction as a telecoms lawyer - a very serious player indeed - until the sky changed: 'After I had a brain haemorrhage in 2004, I asked how much money I really needed to live on.' She now spends her time on charities, including Trinity Hospice.

After the incident with the car I am not in the best frame of mind to start a print-making course in the evening. Naked flames, nitric acid, rollers you can scrunch finger bones in. I throw a tantrum and refuse to file metal until I am given a mask and goggles. Then I fall downstairs.

Come up and see my etching - the head of a woman scribbled in the marquee today. 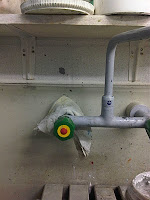 By the art school acid bath I note that my eye has changed while I've been drawing under the Westway: I see Rasta colours everywhere.
Posted by Isobel Williams at 12:15 No comments:

To the people who found my blog after googling 'notting hill carnival 2011 peeing' - welcome.

Out on Portobello I find Kilimanjaro and Egbert the St Lucian Rasta. I tell them I am waiting for Jacqueline, whose husband is a trainee rabbi. 'He trainin' to rabbi,' says Kilimanjaro. Egbert and I admire this greatly but are also jealous that we didn't think of it ourselves. 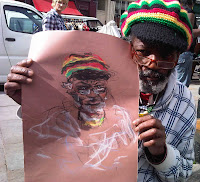 Egbert tells me his eyes are blue-grey. I should have noticed by now. He points out a man called Beddoes. Then he tells me about eddoes, starchy vegetables that he says are very scratchy on the way down. He reminisces about his mother: 'She never hit me with her left. She only hit me with the right once and she knocked me out. Then she threw cold water over me.'

By now Jacqueline has arrived.  We're next to a record stall and we sing along with Dionne Warwick - Walk On By and This Girl's in Love with You. Egbert sits for us in a nonchalant, practised way. His rib cage is tiny, elegant. 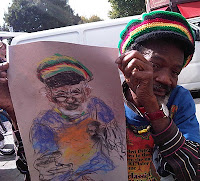 'Egbert draws himself,' says Jacqueline. Some life models in the studio make me tense, especially if they point their feet or arch their arms winsomely above their head, like those ballet dancers who won't make the grade, counting the bars with a dead cod face. Egbert has true grace.
Posted by Isobel Williams at 17:49 No comments:

Return of Operation Cup of Tea 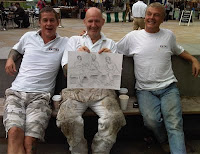 I collect a car bootful of cake from Greggs in Portobello Road.  During the looting a Greggs driver was assaulted and some of their shops were attacked, so Greggs are donating to Operation Cup of Tea, a community-bonding initiative in Duke of York Square on the Kings Road.

Kirsty, chief executive of the Kensington and Chelsea Volunteer Centre, is heaving around the weights which stop the market-stall gazebo from blowing over; I mew piteously about not wanting to put my back out; we are the breakfast cabaret for decorators Wayne, John and Gary.

I decide that my catch of the day would be a Chelsea Pensioner in scarlet. 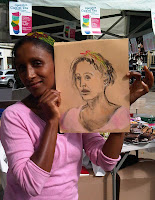 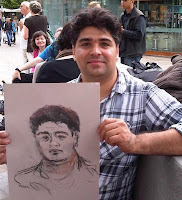 Mohammad is serving Malaysian food at a market stall. He gives me chicken and vegetable dumplings in exchange for a picture. They are delicious. I am really going off that cheap grey sugar paper and I need to work out how to do tone.

Teblez, whose parents are Eritrean, gives me an equally delicious collage of spicy food in parrot colours from her stall, Rainforest Creations. I could survive out here. 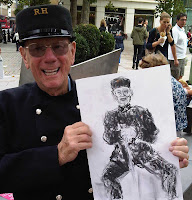 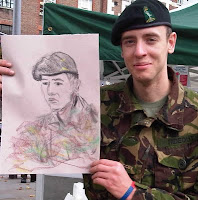 The Territorial Army, including Signalman Rideout, are out raising money for the Army Benevolent Fund. Yes, they could be sent to Afghanistan, without suddenly remembering a pressing engagement elsewhere.

Kirsty shouts over to me: 'Quick, there's one!' A Chelsea Pensioner - but not in scarlet, because it isn't a special day and punk is dead. I ask Staff-Sergeant Crowther of the Airborne Artillery where he served. 'All over, you name it - Bahrain, Aden, Greece, Cyprus...' 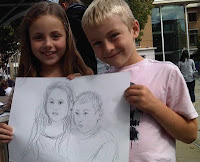 Isabella and her brother Archie are behind me cooing at the paper as I sketch - they must look like putti peering over my shoulder. They are fascinated by my two propelling pencils. Both pencils break down in the course of their drawing - owner malfunction. I just never get the hang of them. 'Get her earring in,' orders Archie. It's a diamante ban-the-bomb motif.

Then I see Sascha.

'Can I draw you?' I ask.
'The CIA will pay you for that image,' he says, and carries on eating a sandwich. I sit on the paving at his feet.

'I am the captain of an ocean-going two-masted Chinese-sailed pirate ship. I spend a month in France and a month here. The French call me le dernier corsaire noir d'Angleterre. The corsaires worked for the French king and queen.'

'You picked the wrong side then,' I say. He wears a huge turquoise and silver ring - 'From one of my victims. I am personally responsible for the deaths of at least a million people. I was physiotherapist to George Bush Senior on three occasions between 1989 and 1990. I was given an opportunity by the gods to change the events of the world but I didn't realise what I was there for. Had I killed him, these people would have been saved. Americans spend all their time preaching democracy and bombing people to rubble. They are the biggest mischief-makers in the world.'

Round his neck he wears an image of Buddha on a chain.
'You're a Buddhist?' I ask.
'Kind of.'

I ask why he was picked to be Bush's physio.

'I was the best in the world. I was the first to have my own concession in Holmes Place. I just got a phone call from the US Embassy. They said: "We take it you're caucasian." It's ironic. When I was 15 I was denied the chance to be a Sea Cadet in the Royal Navy because my parents were Russian emigres and it was the Cold War. Then at 47, when I was guilty of being a pirate in the highest degree, I got to be alone with the chief. They picked on a lunatic like me. There was no way of telling my mental health. I guess they thought: "He gets off on his own eccentricity, he won't blow it."

'A photographer said to me: "I suppose now you've done the chief you'll be applying for a green card." I said, "I don't like your culture and I have no intention of working in your country." He went white.'

I tell him he can get free tea and cake from the Operation Cup of Tea stall.
'What's that about?'
'It's a post-looting initiative.' 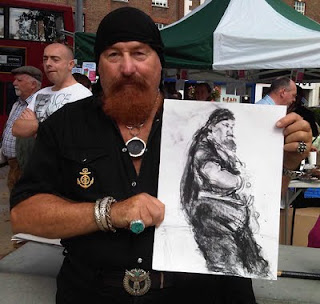 'We allow the bankers to get away with their crimes. It's a racket but they wear pin-striped suits so you don't see it. It's got to come from both ends. My friends around here were frightened for the first time in their lives. They say it's going to happen again. There's no future for young kids - how can someone get a flat? It's madness. People prefer the latest BMW to a friend. They need a major disaster to make them wake up.

'My boat is equipped to live without money. If I found a desert island I could build a shack. I've got five basic systems of cooking including burning wood. They've made us dependent on electricity. The government works through fear.'

Sascha tells how a census official approached his boat: 'He said under section 12 note 27 it says you've got to fill in this form. I grabbed a 15-foot boat hook and said under section one note one of my system it says if you don't piss off now I'm going to ram this up your backside, and he never came back.'

He is easy to draw. 'You've kind of captured me as I really am. You've caught my spirit. I'm going to laminate this and pin it on the outside of my boat as a warning.'

And he's got a Harley. 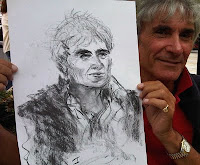 Now here's a tip. Never draw an Italian male unless you are Italian yourself and have been dead for at least 400 years. High standards are in the blood. 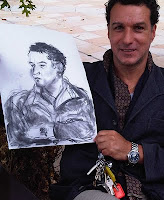 Giorgio owns a nightclub in the Kings Road called 151. I apologise to him for not having heard of it. I'd never been to a club in my life until a couple of years ago when I went to the Torture Garden Christmas party which set the base line for what I now assume to be normal.

As I sit at a cafe table sketching Giorgio, raindrops fall on the drawing, leaving black flecks where they mingle with the charcoal and reminding me of tear-splashes on a school essay. Giorgio talks about business with another Italian, Daniel.

And just a PS about the Notting Hill carnival. A friend of a friend made £3500 selling laughing gas. I have to come up with an idea for next year.
Posted by Isobel Williams at 13:33 No comments: