Occupy London at St Paul's; the Orchestra of the Age of Enlightenment 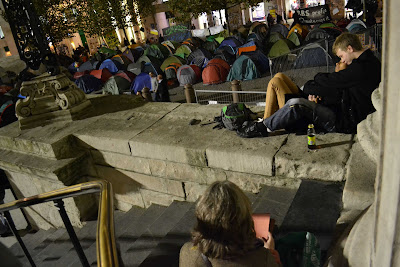 A study in layers of oblivion at dusk: the St Paul's camp is oblivious to the lovers, whose unfinished picture I posted here in November - they gave me permission to draw, then retreated to their island. And I didn't know I was being photographed drawing them by a student, Ling Zhou, who's just sent me her photos.

Serenity of a kind had returned to the steps, as the cathedral had re-opened after its forlorn, disastrous period of closure. 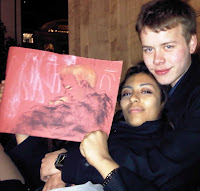 Yesterday I took a break from drawing the Balzac/Zola/Dickens/Trollope novel that is Occupy to draw the Orchestra of the Age of Enlightenment rehearse Messiah. I had thought the act of drawing would make me oblivious to the music, but my experience was intensified.

Hardly any chat, just Handel. The musicians' opinions on Occupy ranged from 'Unprintable, sorry' to 'My mother, who is very churchy, wrote to the Dean of St Paul's to say how terrible it was that the cathedral was not engaging with the protesters.'

That's a pencil Nicholas has in his mouth.

I'm returning to Occupy on Wednesday for a Cinderella day - first to draw, sitting on the cold stone, then to attend a different Messiah in the cathedral as the guest of a financial institution, with a reception beforehand.