Online hearings, eh. Screenshotting and drawing from the screen are illegal. I don’t see the point of drawing from memory when you can google the postage-stamp faces.

Robed or not, the judges trapped in their doll’s house squares on Skype for Business evoke Francis Bacon’s screaming popes. The stifled command, the confinement, the frustration with the bundles.

Above the Master of the Rolls, the grid lines of polystyrene ceiling tiles recede to infinity. They echo the popes’ geometric cages of paint.

The Master of the Rolls’s camera is not static so we view his surroundings from different angles. A green glass banker’s table lamp, a Victorian tiled fireplace, photos on the mantelpiece, highlighter pens, teal and dark red curtains in a design I would call ‘John Lewis first nation’.

He sips water from cut crystal while presiding in a panel of three judges which I represent thus: 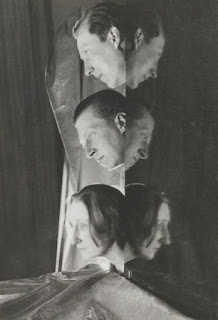 
At a time when we are encouraged or mandated to wear masks, the case concerns automated facial recognition (AFR). Counsel muses where AFR stands in relation to other areas of identification such as fingerprinting,  DNA or CCTV. He asserts that CCTV is a greater intrusion than AFR in that it identifies ‘what a person is wearing or doing’, makes a ‘moving record of a person’s actions…happy or sad, peaceful, drunk or aggressive’; ‘identifies who a person is with and [apparently] talking to’. AFR is a tool that ‘simply narrows the pool of individuals that an officer would be looking at.’

Ed Bridges disagrees. Liberty, supporting him in R (Bridges) v CC South Wales & others, comments: 'In the world’s first legal challenge to police use of this tech, Ed is arguing the force is breaching rights to privacy, data protection laws, and equality laws.' One argument is that AFR can produce false positives/negatives, like Covid-19 tests.

Jason Beer QC wears antlers made of a light fitting. No one is robed, but if this were a real court should masks be added? Yes, says barrister and singer Ben Seifert, campaigning on the basis that courtrooms are enclosed talking shops with poor air flow.

Here is a faithful representation of the hearing: Francis Bacon’s Study for a Head under the hammer at Sotheby’s New York, 2019

A – pumped-up legal commentator holding gavel
B – observer in jacket by Cath Kidston (subsequently in receivership owing to Covid-19 but now trading online)
C – legal teams
D – bench
Next day brings an application hearing for Depp v News Group Newspapers Ltd & another before Mr Justice Nicol. The start is delayed while Skype for Business is temperamental. The name of Johnny Depp appears among the blanked-out observers. Numbers diminish as time goes on.

The clerk, looking cool and elegant, announces: ‘Judge has said if you want to remove jackets that’s fine.’ Counsel X waits for the judge to say it himself, then takes off his jacket, revealing too much information (sweat).

Counsel Y, more crumpled and tousled (but in a showbizzy way) than counsel X, sagely keeps his jacket on; he also has the best lighting. He laments 'a strong sense of ambush' having received 58 documents from the other side yesterday. He presents a controlled amount of head-shaking exasperation without lapsing into querulousness. When he is not speaking we see the cornice and the top of his head – he could be eating a fry-up or talking to Johnny Depp out of sight of lip-readers, who knows.

We see the jacketless judge only in close-up, in Caravaggesque chiaroscuro. He appears to be wearing a blue and white Bengal stripe shirt from T. M. Lewin, one of which I am cannibalising for masks. 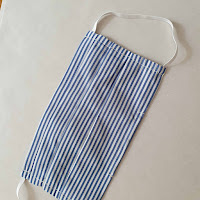 I recoil from the unedifying Punch and Judy content of this application, on a tiresomely hot day when disease, political mismanagement and climate disaster stalk the land. There is talk of vodka, domestic violence, a post-nup. The judge slows right down when taking notes about the drugs (‘MDA?’ he enquires), not on familiar working territory it would seem.

While l am watching, tech problems are confined to muffled underwater sound from one, and the capriciousness of the Skype connection. The participants display Covid-friendly face and hair touching, nose and ear scratching and one imaginary beard stroking.

The obligatory offstage electric drill strikes about 90 minutes in.


Posted by Isobel Williams at 15:06 No comments: 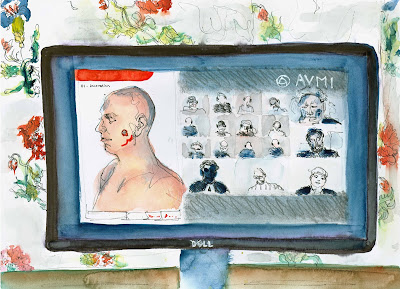 In my Hancock's-Half-Hour-directed-by-Kurosawa lockdown life, I injure my nostril doing a home Covid test. Not much blood. Have I left the swab stuck up there? Panic.

For distraction I turn to the fourth mock virtual jury trial run by Justice, the law reform and human rights organisation. It starts half an hour late because there are three rival jury lists. The judge assures us that no hearing in his experience has ever started on time: 'There is always something, so don't rush away saying the technology is no good.'


The case, a fiction about vengeance and an unreliable barmaid, reads like a rejected Thomas Hardy plot. Prosecution counsel fastidiously pronounces glassing in inverted commas.

Last time the judge's backcloth was an Osborne-and-Little-style repeat pattern of the royal coat of arms, but it has been swapped for a more dignified version. Prosecuting counsel has taped white paper over his enthralling scarlet paint but is terrifyingly backlit to begin with.

Sound
For John Cage fans there is silence and found noise. Muting is a constant problem and the judge explores elegant ways to ask jurors, counsel and clerk to watch this, e.g. 'You would be held more effective as an advocate unmuted.'  Mike, the Unseen Voice of Tech, may have a hand in some of the muting. The judge is accidentally muted to the public for the summing up. Once he finds out, he gamely tries to fill us in. When he is troubled by reverb, we can hear it too.

Miscellaneous door closing, paper shuffling, drink slurping, traffic. Transmission freezes at about 13:34, but not for long. During the break, we get the judge speaking over a clicktrack of his own voice, and bursts of indecipherable chatter from a group clearly not social distancing (the jury?). Mike's mic check. 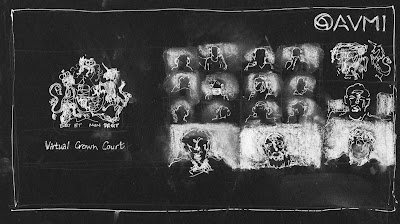 The jury
Gathered in one place for the first time in this series, the jury are in what looks like a white-walled closed cafeteria. In their on-screen lab-rat cages, it is impossible to tell if they are social-distancing. Gratifyingly, the one called Michael Collins has an Irish accent. While the judge is assuring them that their safety is paramount and masks are provided for all, one juror is wearing a mask. By the end, three are masked.

They have been selected from people who are not shelterers. They are prepared to travel to the designated place, to be enclosed with others and to use public lavatories without fear of hazard. They may have to use public transport. When I attended a long-running trial at the Old Bailey, half the jury - who were selected because they were able to spend months out of the workforce - were obese. Where am I going with this? Nowhere. I am staying home.

Questions: how important is it to be in the physical presence of a witness? Are the pheromones and stress chemicals which you unconsciously detect a help or a hindrance? Even if a witness is easier to see on screen than across the courtroom, does the camera objectively reveal demeanour? And can you rule out online distractions? (Ooh look, bookshelves - let me judge you.)

The jury splits 7:5; we are not told which way.

We the people
While the jury deliberate, the judge discusses with prosecuting counsel how, in the absence of a Tannoy, the public can be informed when the jury is returning. He speculates that the public are getting on with 'your novel, your crossword or your knitting'. His concern for the public is not mirrored in real life: the public gallery has effectively been junked for the duration, despite pious assertions to the contrary.

Now here's a worry. Writing about this project on his blog Counsel of Perfection, barrister Maximilian Hardy says that a virtual public gallery 'needs to function in such a way that the trial is not being recorded on mobile phones. The solution to this is to have supervised remote locations at which trial observers are able to log into a particular trial having surrendered any recording devices with the parties alerted to their presence.' That excludes shelterers.

He doesn't mention the need to stop people drawing from the live screen, which is illegal, even in your home. Courtrooms (below the Supreme Court) have to be drawn from memory. Look, I don't make the rules.

This is the fictional case of  R v George Drew, indicted for s20 Offences Against the Person Act unlawful wounding. HH Alistair McCreath (who devised the case) is presiding at the virtual Crown Court, which he places in Erewhon, but let's not go off on a Samuel Butler tangent about the potential criminalisation of shelterers.

For more information about this project, please see https://justice.org.uk/our-work/justice-covid-19-response/
Posted by Isobel Williams at 15:04 No comments: