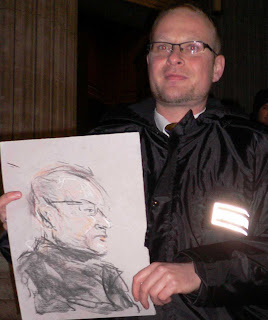 A vicious wind. The cathedral closed early to prepare for Handel's Messiah. Disappointed tourists are turned away by the doorkeepers, who include Nathaniel from Alsace-Lorraine. The doorkeepers are on edge, not wanting an invasion of Occupiers at an event sponsored by a City institution.

'My father was an artist like you,' he says. Poor sod, I think, as I try to settle on the chilly steps, my hair and paper blowing everywhere.

'What did you think when the cathedral was shut for a week?' I ask.
'It was less work for us. We didn't know who was making the decisions.'
That makes two of us.

I head for the camp's library tent and comparative warmth. Nathan, from Pollok in Texas, hands me what I take to be a perfume spray. 'What do you think of this?' 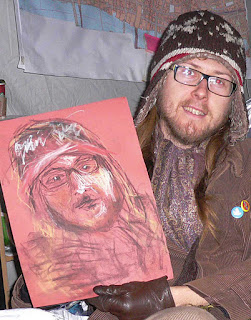 I spray it on the inside of my wrist and sniff. Lily of the valley smothered by strident modern notes. A smell that makes you see zigzags in hostile colours. Bridget Riley on acid.

'Smell me,' I say, pointing under my left ear. 'This is what Proust smelt like.' I think of the late Henry Cooper saying, 'The great smell of Brut' as he slaps it on.

'It's an old perfume,' I say. 'Jicky by Guerlain. Can you tell the difference? That spray's got harsh chemical notes.'

Nathan nods diplomatically and says his bottle is a room spray. 'It's supposed to be hyacinth. I made a donation to Buckingham Palace for it,' he says. 'I bought it in the gift shop there.'

I show him my Facebook photo, me as the Queen circa 1963, and I do it without a qualm, because anarchists don't give a toss; it's only Labour anoraks and republicans who fret.
'Where are you?' he asks.
'At home, before going to Torture Garden.'
'Oh. What happens there'
'Not much, if you're me. I just waft.'

I ask him where he lived before he came to the camp.
'In an open space in West London. Near Osterley. Sometimes with friends, sometimes on my own.'
'What's your advice to freegans?'
'Observe.'

He hands me three packs of joss sticks to sniff: 'What do you think of these?' He lights the one that I choose.

(I google him later. P2P Foundation. The foundation for peer to peer alternatives. He is described as a post-scarcity political economist, which sounds like my late mother's way of life. I find something about printing robots to help you grow food. I need to look into this more closely.)


A smartly dressed knock-out blonde breezes in with a suitcase on wheels. Blimey, I think, she can't be staying here.

'Can women still sleep in the yurt?' she asks me. 'Camp's looking all different. It changes every time you go away.' I shrug, someone answers and she leaves.

Cass comes up: 'Are you the lady who does the drawing?' 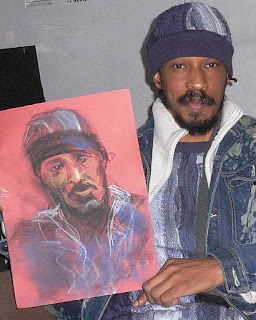 It's nice being the someone who does the something.

I tell him I'll have to hurry because I'm waiting for Tina, an occupier from Blackpool. We haven't met but she contacted me on Facebook because she found this blog, which she says is like walking through camp. I've invited her to Messiah. I've been given two tickets by the sponsor.

Cass has been here from day one. He edits the live-streaming. He tells me that the first food tent blew away and they tweeted for another; that the Italian professional chef stormed out but there's a similar one now; that most of the techs, the elite boys with very special toys, have gone to the occupied UBS building in Hackney for the electricity. (I've noticed before that they are having the time of their lives - this is their Bletchley Park moment.)

My phone rings. It's Tina. She turns up. She's the knock-out blonde. I smarten up. And off we go, two Cinderellas without a prince, to be plied with mulled wine and morsels of Christmas cake with Stilton in the crypt, then to sit in all the glitter and architecture under the whispering gallery while choirboys sing with bloodless perfection. The cathedral is an echo chamber, the amateur choir so numerous that it can't avoid sounding like a herd of wildebeest when it sits down or stands up.

I sniff my wrist. The smell of the room spray has morphed into Palmolive milk and honey handwash which I associate with desolation. My wrist starts to itch.

After Messiah Tina shows me the empty yurt - it looks cosy and snuggly in there - then introduces me to the sacrificial lamb. The madonna. Tammy.

Tammy Samede is the named defendant, symbolising the whole camp in the court case against it. Tammy's friends are helping to make sure she won't feel as if she's been hit by a truck.

She's standing in the cold, waiting for someone, fretting about the statement she's writing with legal help. She swears, then says to me politely, 'Sorry, miss.' I am embarrassed, not by the word - how could I be - but by the 'miss'. She won't come to the pub with us - she has to wait in the cold.
Posted by Isobel Williams at 22:42