Occupy London at St Paul's: in the kitchen tent 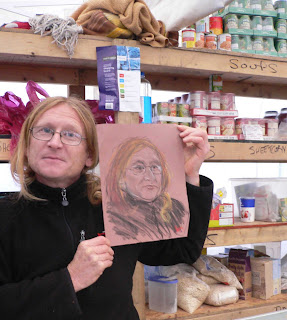 When Janick is working in the kitchen tent it runs on his energy. Someone asks him if he leaves his chilly tent at St Paul's to sleep inside the occupied UBS building. 'No, I'm not bourgeois. I'm a true Marxist.'

Among the true believers roughing it outside St Paul's, it's easy to feel that the grey-carpeted, 400-room office complex, emotionless in design, infects some of its inmates with a corporate rather than comradely attitude. Janick hands me an empty Fortnum & Mason tin which once held Ceylon flowery orange pekoe superb tea bags, to put drawing materials in. It's just right.

David is chef: he toils long hours and tries to keep the atmosphere calm. 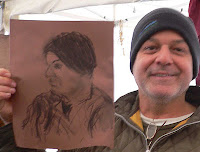 On Saturdays a man does Irish jigs to over-amplified music on the steps of St Paul's for an hour. It has a peculiarly wheedling sound.

There is a sudden glut of bacon sandwiches. A kitchen hand cries: 'I've found some brown sauce! Yesss!!'

Someone strides out of the tent with purpose: 'That Irish guy. I'm gonna kill him.' 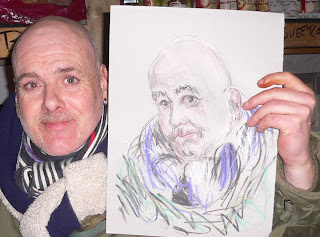 I pose with an unlit cigarette getting soggy. I concentrate on keeping it in place and not shaking. I was in the dentist's chair the other day having a crown prepared; it was less hassle than this. I could do with a saliva ejector.

Rupert surveys his drawing: 'This is shit,' he says. But I like his way with colour.

A man studies it: 'You've got the look of her. Bette Davis. Cruella de Vil.'

Rupert's brain spins a tale for him and for me about how he murdered his girlfriend's rapist with a crossbow. 'The police can't tell it's my arrow. Can I kiss you?'

In the evening, a man from Hare Krishna brings metal vats of aromatic rice and dhal, subtly flavoured and delicious. I feel I shouldn't deplete the kitchen's stocks but there is masses to spare.

On LBC Louis Armstrong is singing We've got all the time in the world.

The court case against the St Paul's camp starts on Monday.

At dusk a bride in a sleeveless, strapless gown shivers on the cathedral steps as the wedding photos are taken with masked occupiers.
Posted by Isobel Williams at 00:00