Drawing at the Leveson Inquiry

When grandees such as Tony Blair were on, people queued from 4am to get into the public gallery. Today there's no queue to speak of.


'What was the best day at the inquiry?' I ask a cameraman.
'Max Mosley.'


There's chitchat among the tricoteuses in the public gallery:
'Rebekah Brooks...'
'If she's charged...'
'Can't stand that woman.'
'She came in and looked several people straight in the eye.'

'Jay [Robert Jay QC, lead barrister to the Inquiry] has reputedly earned half a million pounds for this. He's worth it. It's public money. My money.'
'I wanted to say to Jay, why don't you really attack Blair?'
'Because Blair's got a legal background, that's why.'
'I need a small child to gnaw. I'm starving.'

﻿﻿﻿﻿﻿﻿﻿﻿﻿
My optician says I'm top gun standard. And today I need it because I'm a long way from my targets across Courtroom 73.
I'm messing around with a portable, court-friendly but inadequate drawing kit and reduced to sharpening pencils into my pencil case.

﻿
﻿﻿
﻿
'Will the court rise,' says the clerk, and a mouse's nest of pencil shavings falls on the floor. Sorry.
Now for a bit of glamour. The harsh fluorescent light bounces off Jon Snow's cheekbones. They are as defined as scimitars. No wonder he's on the telly.

'Jesting,' growl two pedants in the public seats, one of them me.

We can hear a helicopter and seagulls.

Posted by Isobel Williams at 21:55 No comments:

A glance back at the Occupy London camps

A wraith from Occupy removes the ice-pick from its skull just long enough to rebuke the others for not rebuking me. My crime is to write about what I see, rather than what I am told I am seeing.

'Tell her that Occupy is a horizontal movement,' whispers the wraith. (Horizontal in this context means leaderless, with nobody aspiring to have power over others inside the organisation.)

Occupy is a horizontal movement. As am I.

While I was visiting the Occupy camps, I recorded what I saw but I left some things out because people worried about their mothers:
'You won't draw the cigarette, will you.'
'You're not going to write that you can smell dope, are you.'

At the Finsbury Square camp, Ella (see previous post) made a drawing on a scrap of newspaper for me.

After I drew Rupert at the St Paul's camp in December, he drew me. The fag was his idea. It tasted horrible. Despite the smoke in his drawing, it was unlit.


But the tears of blood for Occupy are accurate.

And Amy (8) drew me in the crypt of St Paul's. She called her drawing 'The Happy Artist.' 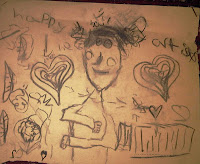 Mud and beauty: the last of Occupy London at Finsbury Square

In the High Court on Tuesday, bad-glamour-boy E tried to clamber into the judge’s empty seat and was ejected from the court.

I make a final visit to the camp. E has only ever been in a haze in my company, so he says we’re getting married. He asks me for a double portrait of him and Lee.

Double portraits are hell. You have to get both faces right. E giggles at the result: ‘I look like my dad.’ We go through an entire relationship in the few seconds it takes to hug goodbye.

Harjeet has her bright proselytising eyes on local communities: ‘What a great discussion to have, about how we want the world to be in the future.’

Tom is wearing jeans decorated with scarlet spray-paint. He glares at his phone: ‘More emails. I want more emails.’

Tom feels sidelined by the Occupy cadre; he's impatient with members whose souls yearn for flip-charts and meetings about the names of meetings [sic]: ‘Occupy’s press strategy is completely xxxxed,’ he says. ‘Look at this fortress. Look over there at London’s big iconic buildings. It’s like Asterix. It’s like a World War Two outpost. It’s got to be on the news. They’re directing me to stop people lobbing bricks when the police come. Why the xxxx should I bother. The camp’s been co-opted by people who want it to be a talking shop. I don’t do that.’

Ella is 18. By the bonfire, at dusk, she and Lynda, aka Dylan (17), make a heartbreakingly lovely tableau as Ella picks nits out of Lynda’s hair. Head lice like clean hair. ‘I’m good at this. They’ve eaten a lot of your blood,’ she says, throwing them on to the fire one by one.

‘I find education doesn’t teach you anything any more. I did quite well in school but learned more outside St Paul’s in one day than I did in school. They give you a sentence structure and you can’t have a mind of your own. Education is just another tool for training camps. It teaches you to take orders. There’s a beautiful little established community here. Occupy is beautiful. It has become legend. All these communities coming under one name.

‘It’s not going to be the revolution – too many people are half-hearted. We need to be more organised. Finsbury Square isn’t going to promote that. It’s another big spark towards what will become the revolution. It’s nearly happened. It has to come in the next few years. It’s not necessary for people to come out on the streets now but as more people have less of a choice they’ll care more.’

Meanwhile, a desiccated faction within Occupy tussles for the right to have elections and grab power.

The campers have turned a public lawn on Finsbury Square into contaminated mud; the camp looks hostile and irrelevant to passers-by; the cooking area is mesmerisingly filthy. This evening, occupiers are saying:

‘This is bad.’
‘We should have made this a sustainable eco-village. But we didn’t.’
‘This is a shit-hole. We could have won awards for this.’
‘Too much talk and not enough action.’

Charlie came to Finsbury Square after the St Paul’s camp was evicted. ‘I couldn’t handle it for the first couple of weeks. After that I quite liked it. But it was a smaller space with too many people.’

Charlie says he had an advertising business in South London: ‘I can start it again. But I like this life, the alternative way of living.’ He looks around. ‘This became a mess. Everything became too dirty. There was too much anti-social behaviour for our people. Mud is the problem. Cold is all right.’

Washing my hands in The Master Gunner, the pub over the road, I turn to a young woman and ask: ‘What do you think about Occupy?’
‘What’s that?’
‘The camp in the square.’
‘I didn’t know that’s what it was called.’

‘They started to bring their signs in here,’ she says – I learn that she works behind the bar. ‘Then we heard about epidemics breaking out in the camp. We had to stop them coming in. We had to think about our customers. The campers were just coming in to use the facilities. They’re just people who trash things.’

Occupy have been evicted from Finsbury Square. Now what?

Posted by Isobel Williams at 17:51 No comments:

Not quite the last of Occupy London in Finsbury Square

Occupy campers have built a barricade for a last stand against eviction, due any time from midnight. Hooded people hang around in the slippery mud. 'I hope it's tonight,' says one. 'Please come.'

I sit inside the wet barricade on a wet chair in the wet, drawing wetly on wet paper. My watercolour pencils weep. When their tears dry I dip their points in puddles. (The drawings die in the night, colour and line blotted and leached away.)


Occupy is human so it conducted a civil war over land and money - over who gets to govern its dwindling funds and the faecal, feral waste that was once a lawn in Finsbury Square. Who rules in hell? On my last visit campers were being tattooed with a communal blade and nothing but water from random plastic bottles to swab the wounds.

The battle of Portaloo began after the hiring company confiscated the original toilets, campers having rendered them impossible to clean on site. ('Worse than Glastonbury,' said one.)

Should Occupy pay for replacements? Should individuals spend their own money on them?  Or should the campers just continue to do without? Hot, smelly days passed while Occupy agonised over what to do about the jubilee. And what, they wondered, was Finsbury Square anyway - a shiny template for consensus-based activism or a holding bay for lost people and rent-a-mob, trashing the hopes of the couple who own the restaurant in the middle? What, in fact, was Occupy? Camps or campaigns or both?

Into the raging correspondence (between those who had internet access) I'd lobbed a suggestion from the Financial Times which went to the heart of what Occupy said they were campaigning about on our behalf. Occupy ignored it and carried on with its introverted parish-council bickering about whether it should feel embarrassed to be buying a £137 bolt cutter for breaking into potential squats.

Back in the rain, a man peers inside a Portaloo (replacements were ultimately organised in a private, desperate decision against the spirit of consensus) then looks inside the second one. He enters the first.

The overnight blottings from the soaked drawings are better than what survived of the drawings themselves and more symbolic of the fractured mood.


Tom, aka Johnny Teatent, a contemptuous blond swaggerer, peels a clementine with the prehensile fingers of one hand, leaving the peel in a single piece, without looking. Later he emails to the clique: 'Banging castle built. Campfires. If anyone wants to hammer. Slash come down take pictures. it is getting to be an awesome barricade.'

Andria has devoted her resources to helping addicts at the Occupy sites: 'I've fed them when they've been hungry, I've seen to their wounds. I'm like that Mary in the Bible. The other one.' Today she takes a foundling camper under her wing 'because I'm a Mama and he's a baby.'

Books from the camp library are out in the wet. Sir Winston Churchill: A Memoir. Giardinaggio Senza Problemi, an Italian guide to horticulture published by Reader's Digest. I look at the desultory attempts to grow food in the collectivised flower beds. I think about Stalin and Hamlet.

I take Doctor in the House by Richard Gordon.

My drawing is as unproductive as the contaminated soil. I'm cold. I'm going.

Oh, there's the glamorous profile again. E has abandoned his crutches prematurely and springs/limps/swaggers purposefully towards Moorgate with two other regulars.