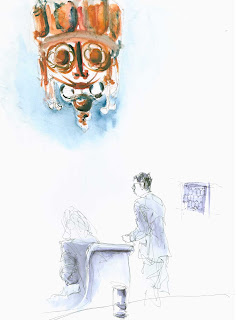 Donald Trump, who breeze-proofs his hair with a baseball cap, is taking on a proposed wind farm near his golf club in Scotland. But banish thoughts of Quixotic flailing at windmills: today's hearing is sharply focused on i) the correct construction of the Electricity Act 1989, ss36, 38 and Schedule 9 (3) (1); ii) whether condition 14 attached to the consent for the wind farm was so imprecise, void for uncertainty and unenforceable that it vitiated the s36 consent.

Void for uncertainty. Yup, that's me.

A friend who happens to be passing drops in. A top pensions lawyer, recently retired, he is fascinated. 'Maybe I should have done planning law,' he muses afterwards. 'All those appeals...' It's his first time in the Supreme Court. For solicitors, keeping their clients out of here is a badge of success. 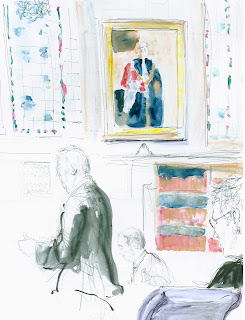 He helpfully points out the socks of the solicitor in front of us. They say THURSDAY.

A journalist says that watching me draw is more interesting than the case. I don't agree. Too much dithering and blank staring going on. Which reminds me...

Last July, a judge in Northern Ireland ordered a teenager who'd been bailed on charges relating to public order offences to draw him in court. Apparently the youth liked art.

This order was later withdrawn (possibly because drawing in that court is illegal), but what disturbed me most was the judge's rider about behaviour while sketching: 'If you look stoned, you will be arrested and remanded in immediate custody.' 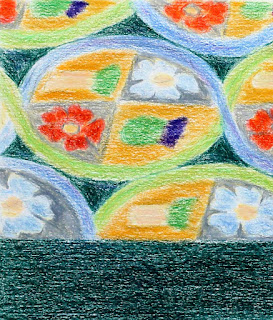 When I am drawing, I must look stoned out of my mind. This is due to varifocals, concentration, lack of inspiration, the voices in my head, fear of committing a public order offence, and fantasies about cake. Certain learned counsel have a mild hallucinatory effect as well.

Have you noticed how the flowers on the carpet keep moving around? It was designed by the pop artist Sir Peter Blake, who also designed the Sgt Pepper album cover. I mean, asking for trouble.

And did you know that if you stare long enough at the Supreme Court carpet it spells out 'Paul McCartney is dead'? That will be understood by my older reader.