The Supreme Court and a dream setting

Trying to view distant justices across the high-backed chairs is like being a child straining to see over the dashboard. I'm focusing on Lord Neuberger but he's an all-action judge who doesn't lapse into long poses.
﻿﻿
The case is Zakrzewski v The Regional Court in Lodz, Poland. Lukasz Zakrzewski's sentence was reduced before his extradition hearing; did that invalidate a European arrest warrant? Five law lords sit in the calm abstraction of Court 2, a white space relieved with flowery national emblems and the hint of a proscenium arch. ﻿﻿ 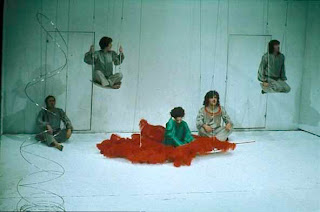 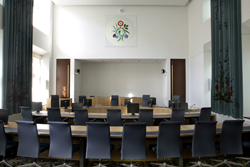 I think of the sparse white box used by Peter Brook as the set for his legendary 1970 RSC production of A Midsummer Night's Dream - no photograph does justice to its stark magic. Court 2's plushy curtains, with their Pre-Raphaelite enchanted forest look, would have been dismissed by Brook as too obvious.

I am struck by the beauty of the judges' voices. Worthy of Alan Howard, Brook's Oberon/Theseus.

Counsel and judges benefit from discreet amplification. Their individual desk microphones have red lights at the tips when they are live. And after the judges go off stage, the legal teams really should check the red lights are off before going into a post-match huddle. 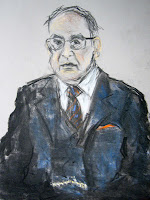 It's panto season, so I look behind me. And see Brendan Cotter, a pin-striped regular on the public benches. Now retired, he was the Principal Solicitor for Surrey County Council. He gives me an authoritative spectator's guide to the Royal Courts of Justice, the Old Bailey, the Solicitors Disciplinary Tribunal, and more.


I'm back a few days later for The Financial Services Authority v Sinaloa Gold plc and others and Barclays Bank plc. 'What is a freezing injunction?' asks a judge, rhetorically. 'White goods,' mutters another.

Lord Neuberger is all movement again, so I abandon a portrait and look at the judicial assistants who sit behind him, like putti.
﻿ 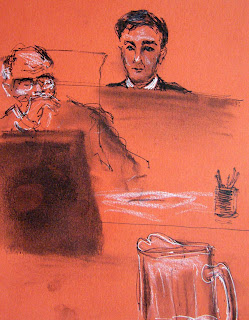 The bench are discussing the concept of recklessness as I start to draw a jug of water recklessly (glass, air, light, reflection, shadow). One of my teachers speaks inside my head: 'Don't look at your drawing. That won't help you.'

Counsel's hands are sometimes behind his back when he's on his feet. He sits down and has a glass of water.
﻿ 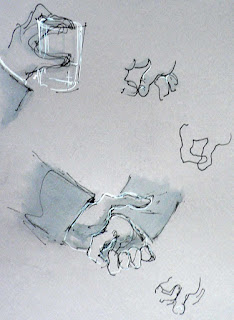 
At lunchtime the Treasury Singers come in to the foyer. They sing carols, accompanied by the bleep of the body scanner, and raise money for Centrepoint.

(Scroll down for pictures.)

Posted by Isobel Williams at 00:04