The Graham Fitkin Band and a sugar rush 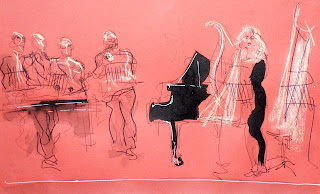 I'm drawing the composer/pianist Graham Fitkin rehearsing his band at Kings Place in London. I try not to trip over anything and end up being the thing that can be tripped over.

There are musical fragments, moments of dynamism, longueurs during sound checks.

Last time Graham gave a concert here he finished his piano solo with apparent poise then left the stage to succumb to norovirus. There is no such problem today.

Graham never wrote anything for harp until he met his partner Ruth Wall, the harpist. Now there are two amplified harps centre-stage.

I don't know how to describe his music, which includes a string of prestigious commissions. Phase-minimal-troubadour-jazz-electric-acoustic-bouncy-mellow gives you completely the wrong impression. 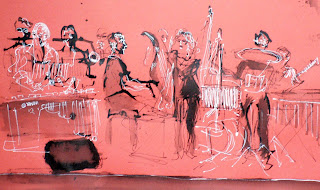 It's a last-minute concert with a full house. Graham has made meringues with Cornish cream which band members distribute to the audience after the interval.

Then Graham hands out party poppers which we're allowed to let off ad lib and on the beat. It's celebratory and we're sent home happy. Scroll down for more pictures. 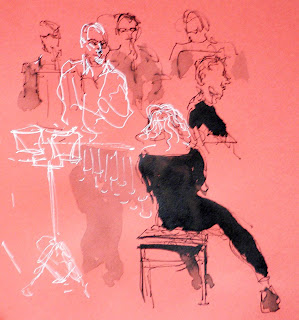 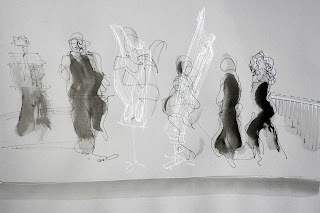