A homeless man shouts 'SEX!' from the top of the cathedral steps.

People are massing on the wide concourse. Just before the clock strikes eleven, the crowd forms a huge irregular circle holding hands, leaving the centre bare. At the last second new people slot into the circle on either side of me. The person holding my right hand is behind me. I can't turn round to look as I might make a noise dropping the sketchpad clamped under my arm, so I am holding hands firmly with a stranger I can't see, in perfect trust.

Clerics from the cathedral stand at the top of the steps. The Last Post is played. Then the silence is intense; passing traffic is irrelevant. Prayers are said after the two minutes. The circle is slow to let go hands. (And this evening, a woman tells me that one of the canons on the steps said that he'd never seen anything like it and thinks they should repeat it.)

People sit down in the circle, meditating and humming while in the centre a man blows giant bubbles. 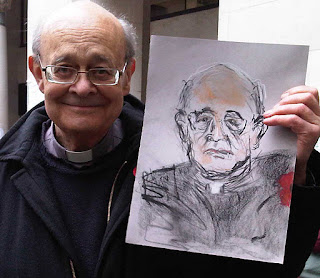 I go to the Tent City University, a marquee where the Rev Paul Nicolson, chairman of charity Z2K, is giving a lecture on poverty and debt: 'Parliament is reducing welfare by £18 billion, hitting the poorest citizens very hard at a time of rising prices.'

Paul reflects on the two-minute silence: 'My favourite uncle, Major Oswald Segar-Owen, who'd taken me for a ride in a Bren-gun carrier at Aldershot, was shot by a sniper in Calais which was being defended to enable the escape from Dunkirk in 1940. I was eight. I also remember a very wounded German pilot who landed by parachute in our garden after his plane was shot down.

'And I remember John Lloyd, a private soldier who was a prisoner of war in Nagasaki unloading a boat when the atomic bomb was dropped. He was in the hold and the blast went over the top. He never recovered from what he saw when he got out of the boat. He used to join me for prayers for peace at Turville, my former parish. He suffered from radiation poisoning. Having had one leg amputated he refused to allow them to cut off the other one. He died long after the end of the war but suffered dreadfully for the rest of his life.' 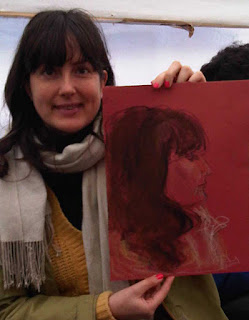 The person who was holding my right hand turns out to be Venetia. This is her first day visiting the camp. Next Monday she starts work as a fundraiser at Unicef and in May she will have a baby.

Any hobbies? 'Upholstery - so far I've done one armchair and dining chairs. It's an old craft, tinkering away, and restoring old things is really green. I learned how to do it at the School of Stuff in Dalston.'

She usually sleeps on the streets in Stratford, East London.
'A mate told me about this place.'
'Have you made friends here?'
'Yeah.' She smiles. 'It's one big family.'

Her skin is pale and she has slept badly. 'It's cold, and there was someone playing the sax all night.'
'Didn't anyone try to stop him?'
'Yeah, but they couldn't.' 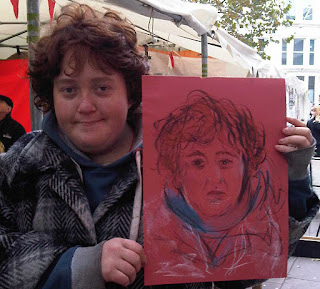 A smart woman comes up: I guess that she could be holding down a job in Paternoster Square but she turns out to be a social worker helping Jess.

I cross the road to the bus stop. Some well-fed Americans emerge from Gourmet Burger Kitchen. 'Let's go get a look at Swampy,' says one. They head for the camp, smirking.

Posted by Isobel Williams at 17:58