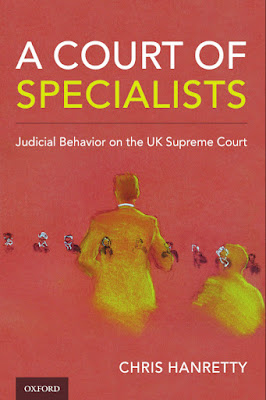 Wisden will be rather thin next year, so if you like chunky facts and statistics why not console yourself with A Court of Specialists: Judicial Behavior on the UK Supreme Court, a volume to make the spotters’ eyes sparkle. (The American spelling reflects the key market of the publisher, OUP.)

The author, Chris Hanretty, is Professor of Politics at Royal Holloway, University of London. Although he is a political scientist, his aim is not to probe the Justices’ personal politics: ‘There has been no suggestion that politics matters for appointments to the Supreme Court. Indeed, it is difficult even to form an impression of what nominees’ politics might be.’ (What Justices may do in retirement is another matter.)

This book covers the period from the Court’s beginning in October 2009 to September 2017, so it misses out the turbulent prorogation spectacular of 2019, R (on the application of Miller) v The Prime Minister and Cherry and others v Advocate General for Scotland, which did much to raise the Court’s profile.

This book is for anyone engaged in Supreme Court haruspication. Although Professor Hanretty points to the turf guide which suggests that the Government and parties using the most costly counsel tend to have a good chance of success, there are no easy answers and you are cautioned to cast your net widely: ‘Betting markets [in this case Betfair]…proved accurate in the [first] Miller case. Two weeks before the court handed down its judgment, a £1 bet on the eventual winner would have given a return of just £1.23, compared to a return of £4.70 in the event of the government winning…The betting markets thus made a confident and correct prediction about the outcome of a Supreme Court case.’

The poet George Crabbe keeps trying to break out in the scene-setting at the beginning of the judgment (Lord Neuberger and Lord Hodge). Their conclusion is elegiac: ‘The poet Ovid spoke of time as “the devourer of things” (“tempus edax rerum”. Metamorphoses 15.234).’

There is no poetic soul in Miller 1, enacted before a sour and riven nation, with angry tides lapping at judges left undefended by a feckless Lord Chancellor. The only balm was to see the Supreme Court, at a time of unprecedented pressure, being hospitable and accessible (‘The communications could not have been better,’ wrote David Allen Green for the Financial Times), and to witness competent, articulate people at work, contrasting with the strident reverse-talent contest across the square.

I hesitate to judge this book by its cover because it uses one of my drawings of R (Nicklinson) v Ministry of Justice, the assisted suicide appeal. On his feet is Paul Bowen QC, representing the late Tony Nicklinson and Paul Lamb. He was leading Guy Vassall-Adams, seated to his right, who became a QC in 2016. I blogged about it here.

A Court of Specialists: Judicial Behavior on the UK Supreme Court by Chris Hanretty, OUP, £64, also an ebook
Posted by Isobel Williams at 12:53