I am reviewing The UK Supreme Court Yearbook Volume 7 (2016) not as a lawyer but as a tax-paying dilettante. So let’s start with a daft social media meme: ‘Grab your nearest book, and open it to page 117. What's the second sentence you see? What does it mean about your 2017?’

Here goes. ‘The door was opened by the colonel, and one of the other defendants immediately shot him dead.’ We’ve landed in a masterly analysis of joint enterprise following the Supreme Court judgments in Jogee and Ruddock written by Julian Knowles QC, who led for Ruddock and acknowledges the support of Associate Professor Matthew Dyson, Dr James Mehigan, Matthew Blower and Jessica Jones. Anyone interested in joint enterprise – student, academic, lawyer, journalist, politician, campaigner – would gain from studying this humane and approachable text.
Knowles’s essay is in the Commentaries and reflections section, which starts with Lord Neuberger on Judicial innovation in the UK Supreme Court. The daily assaults of Brexit news and the unwelcome fragility of the Union provide a shudder-making backdrop to the quest for openness, accessibility and inclusivity in his article.


Lord Neuberger concludes with a gentle reminder to our elected masters: ‘…the Government is proposing to make available a large sum of money to overhaul both the physical and the electronic infrastructure of the courts. There will be fewer but larger and more modern court buildings throughout the UK, and the antiquated and fissiparous IT systems in the courts will be replaced by a modern system.’ Let’s hope. But fissiparous is the current word for the kingdom too.


The next section, The protection of human rights by the UK Supreme Court symposium, includes a fascinating discourse on opacity/transparency by Kirsty Brimelow QC, Into the dark: rights, security and the courtroom.


For ‘rare in camera cases and exceptional departures from open justice’, Brimelow suggests ‘allowing designated members of the press to inspect any secret material. Otherwise, they are arguing for an unknown. Undoubtedly, this leads to speculation which may be more damaging than the actual material sought to be withheld’.


But who would want to be in charge of designating members of the press, given the dwindling number of trained legal reporters, judges being branded 'enemies of the people', the once great Daily Telegraph’s invention of the Supreme Court Justice ‘Lord Hudges’ [sic] and casual misreporting?


Starry QCs contribute to Thematic analyses of the 2015-16 legal year and The 2015-16 legal year in overview, which range alphabetically from administrative law to unjust enrichment. They provide an authoritative crib for anyone who needs to swot up on their specialism, which is everyone.


At the time of going to press, Article 50 had not reached the Supreme Court. Lord Millett PC QC examines the Divisional Court’s decision in Miller, while Dominic Grieve QC MP elegantly disses Brexit. The Supreme Court’s case load, he writes, ‘could perhaps act as a salutary reminder for politicians of some of the complex issues with which we are going to have to grapple. One also starts to feel sorry for the Court, which spends its time trying to clarify existing law only to have it all turned upside down before its eyes.’  My sole contact with this great mind has been to warn him off the salt and vinegar crisps.

The Yearbook ends with Wisden-type statistics. Whizzing back to the beginning, we have an introduction by Daniel Clarry and Christopher Sargeant, joint editors-in-chief of the Yearbook series, Judicial panel selection in the UK Supreme Court: bigger bench, more authority? This is followed by a foreword by Robert French, the just-retired Chief Justice of Australia: Australia and the United Kingdom: a bit like family, much in common but a lot of difference.


I know you can write a better review, because you have legal training and stuff. Please do. 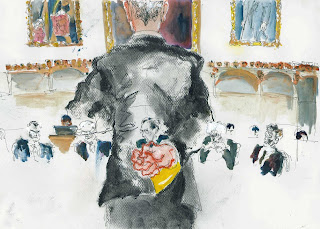 Posted by Isobel Williams at 12:54