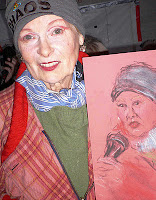 We gather round creamy-skinned national treasure Dame Vivienne Westwood in the chilly university tent. 'Artists are freedom fighters,' she says. 'Go to the National Gallery and start with the seventeenth century Dutch paintings. I don't like installations. It takes no talent to make them.' Liz, the Greenham Common veteran, weighs in on behalf of installations. A man asks if Vivienne will take a group of people round the National Gallery because he doesn't know what to look at.

I tell her afterwards that I used to wear one of her bustles and people would forever whisper to me that I had my skirt caught up in my knickers.

I try to hand the picture to someone who I think is a member of her team.
I ask: 'Are you in her entourage?'
'Her WHAT?' she blazes at me, with a scowl.
She is.

George Barda is one of the litigants in person fighting eviction from St Paul's. He wept in the witness box, glimpsing the magnitude of his campaigns. The judge complimented the defendants' 'passion and sincerity'. In contempt of court, someone had posted an illicit courtroom photo of George's left ear on Facebook last time I looked.

I draw Peter Olive. No time to chat. He is a writer/producer/multi-instrumentalist/DJ.

Online I find a photo captioned: 'Peter Olive played keyboards in the debut performance of Adam Ant's Pirate Metal Extravaganza at The Scala.'


Barry is playing a 1979 Fender. Knock knock knocking on heaven's door, Ziggy plays guitar.  I ask why he's playing music from before he was born. 'I like 70s music - glam rock, ska, new romantics. I come here a lot, not so much for the politics but for the jamming and the music. There's something every day. It's better in the warm though. I'm off to the Bank of Ideas.'


Erin is flopped on a sofa in the library tent. We are accompanied by a Diana superfan who spent each day of her six-month inquest in court, with DIANA and DODI written on his brow. He stands holding heavy orange carrier-bags which he doesn't put down. 'Were you at the royal wedding?' he asks me.

Erin puts on a pale lilac flower and a purple polka-dot ribbon for the picture.
'I've just been asked to model underwear.'
'What label?' I ask.
'Occupy. Underpants.'

Erin has recorded songs, playing the piano accompaniment as well. I listen to the cassette through earplugs: melancholy, sweet.

Erin hands me a booklet: 'Some Very Nice Songs' by Joe Nobody (i.e Erin):
Tear out the page from my daydreamer's book
Start out a new one, p'raps this time a true one.
On my first visit to the camp, someone told me to go down to the library. I looked beyond the tents for a public building. Mistake. You have to adjust your idea of scale. It's a bit like The Borrowers.

At that time the library was a couple of shelves of paperbacks in the open air. Now it's a tented retreat with squashy chairs, clapped-out sofas, an atmosphere and a mild-mannered librarian, Nathan from Pollok in Texas. Somewhere to get sentimental about as it recedes into history.

Posted by Isobel Williams at 23:03