I walk through St Paul's cathedral to the crypt cafe and find myself tearful for complex reasons, but the acceptance found here, the sense of freedom of worship and the freedom not to worship at all are at the heart of it. 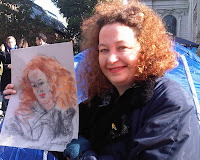 Saskia says she felt very safe sleeping in her tent outside the cathedral last night, surrounded by others and not far from the banner saying CAPITALISM IS CRISIS. 'This is the first time I've been able to take part in the international debate,' she says. 'It wasn't possible while my daughter was growing up. And now we've got the technology. I've just been texting protesters in Hong Kong.'

A well-groomed man introduces himself as a reporter for Iranian television and asks if he may interview Saskia. She declines, as he is not clear about who and what he represents. We say we are surprised that, as a journalist, he claims not to have heard of women such as Sakineh Mohammadi Ashtiani who may or may not still be sentenced to death by stoning, and whose lawyer is reported to be in prison. He looks away and says that all states have their own problems. Then he smiles a lot and flatters my drawing. I ask to draw him. He declines. I am told he has been there every day of the protest. What's his brief? Out in this febrile atmosphere, is it deranged to think that he's trying to portray Britain as a dump, to discredit our comments on human rights?

Representatives of People for the Ethical Treatment of Animals are handing out chunks of vegan sausage on sticks. Abi (aka StopFortnumAndMasonFoieGrasCruelty) speaks on behalf of Carmen, an amiable upright pig: 'We just want people to stop and think about how corporate greed affects the way animals are treated. They are suffering every day to make people a profit.'

Tom, a hitch-hiker planning to go to Argentina, Venezuela and Alaska, intends to change his name to Marcus: 'It's a tribute to Marcus Aurelius - I admire his philosophy. I haven't thought of a decent last name yet. We're campaigning for honest jobs. Bankers get bailed out by billions of taxpayers' money. Under Cameron, people getting made redundant can't get jobs any more.' Tom/Marcus is sitting with the Anonymous section and tells me that the tents are divided into clusters of different groups - 'A united states of activism.'

A group of women with babies is gathered at the foot of the steps. Amy is breastfeeding her daughter, five-month-old Faelyn. She says: 'I brought the baby on the tube with all the commuters and there was a nappy explosion so I had a naked baby to hold up - look! Then I was blowing bubbles down the carriage.'

She is in for the long haul: 'The world is being stripped for plastic McDonald's toys which hold attention for about a second. I'm going to support this movement constantly until there is some achievement or change in the government high up. The only other option is to watch everything slowly sink.'

She is sensitive to the dangers of giving out an 'anti' message (I think of Groucho Marx singing: 'Whatever it is, I'm against it'). She says: 'We need to say what we are for. We're trying to find a positive message that explains the negative.'

Amy beams at Faelyn: 'I wish you'd sit in your pram. No, I want cuddles all of the time, mummy.'

A genial man in a grey suit says he wants to offer his support but can't identify any protesters, so I direct him to the Anonymous group nearby. The protesters are indeed rather low key and compete for space with journalists, tourists, gawpers, exhibitionists, the normal homeless population and 15 students from Middlesex University on an animation course, sent here to do street drawing.

Constable Brockwell is cheerful despite his unflattering portrait: 'The protesters would be here anyway so it's best to work in partnership.' He has had a quiet day. 'I got someone on a mobile phone, that's been the highlight.' He's referring to a motorist who will have got a £60 fine and three points on his licence. I ask Constable Brockwell what he would do if I complained about some amplified musicians who have just struck up in front of the cathedral and he points out that they are on private land.

The cathedral is losing money from visitors and cancelled events because of the protest - the takings are said to be 70% down. 'But the money isn't real,' trills a girl making posters. 'Can I borrow your pink crayon?' 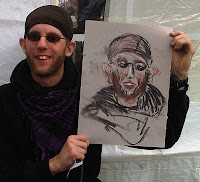 Tarek is a sous-chef from Swindon. His specialities are mashed potato and bread-and-butter pudding - the secret of the latter is half single cream, half double. 'There's a revolution going on all over the world and I want to be part of it.' Tarek has been involved in the internet planning of this protest for the last month. He is German but left his home country because he found it racist.

I am cold to the bone. As a police inspector said to one of the campers: 'You don't need a fridge.'
Posted by Isobel Williams at 21:12