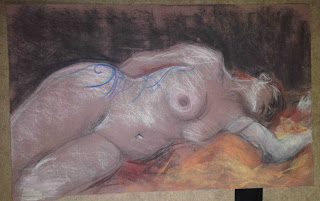 We carry her gear down the concrete staircase of a condemned block of flats, puddled by a leaking washing machine. Shortly after the flat door is locked behind her, someone breaks in to steal the copper piping.

Claire is the star of a suburban weekend life-drawing house party. We all have to cross a busy road to get to the pub. Claire sticks out her bosoms to halt the traffic in both directions and like ducklings we cross safely in her wake. 'Now I know what it felt like to follow Moses,' says Rebecca.

Claire phones her grandmother in Blackpool to reassure her after the riots in London: 'I'm in the countryside and we've been sitting in the garden.' (Claire was posing outdoors while the rest of us scurried inside to fetch stoles and cardigans for ourselves.)

A conscientious hostess, I chivy the giant homing bath-spider into a plastic jug and chuck it out of the window. 'Can they fly?' says Claire. 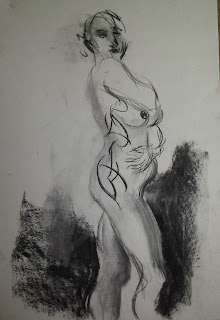 Posted by Isobel Williams at 16:03

Email ThisBlogThis!Share to TwitterShare to FacebookShare to Pinterest
Labels: Claire