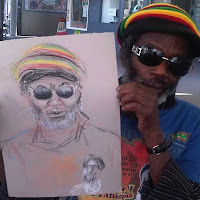 Egbert arrives, this time with his supermarket trolley: 'That trolley don't answer me back.' Inside it is a hand-written notice:
CAR WASH MAN VERY CHEAP.
THIS TROLLEY IS NOT A RUBBISH BIN.
SINGED [sic]
ST. LUCIAN RASTA.

I've no idea why we start talking about the royal family. 'Oh, Margaret, she was a raver. She'd go where royalty is not supposed to. If there was a problem she'd sit down with a bottle of wine or Champagne and deal with it. When Diana died I cried, yes.'

He points out that the Notting Hill riots of 1976 began just round the corner, after some boys had stolen jewellery in Queensway: 'Instead of takin' it home and hidin' it they were flashin' it off. A policeman said what's that and the youth said mind your own effin' business. Then it started.'

Egbert peers around. 'That man is lookin' at the circumference of that woman.'

He holds his picture at arm's length and talks to it: 'You look as ugly as sin. But I like you. You are me. Who said I was as ugly as sin? Oh, I know. My mother.' 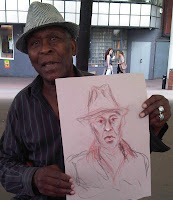 Benjy [left], profoundly courteous, limps over slowly; I've seen him most days, always elegant with a hat and stick. He arrived here from Dominica in 1960. He announces: 'For deviosity, women are the champions.'

Jacqueline turns up for a chat. I like being generally available, out on the asphalt - a geographical reference point. Turn left at the windswept woman with the drawing board. We talk about drawing children and the risk of making them look like little adults. Study the proportions, she says; there's a roundness to their faces.
'That guy over there,' I say. 'Interesting trousers.'
'I heard him talk on the phone when you went to the lavatory,' she says. 'He's a tosser.'

Posted by Isobel Williams at 09:18