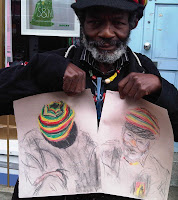 soliloquises in his hypnotic voice then begins a rapid dive into sleep. As his head droops I start another drawing. Neither is finished, even by my hazy speed-freak standards: he wakes and has to keep an appointment.

'It all comes down to being a tree trunk or a cavity,' he says. 'I always say a bird in the hand is worth 82 million in the bush. I'd have been lost without my three sisters and my mother. My sisters were all undone by childbirth. They used to sit around the kitchen table talking about how to get unpregnant, or not pregnant in the first place.'


An ancient man in a yellow jumper cycles past glumly. 'Oh look,' says Adam, 'there's Rupert Murdoch. No, he's a Portobello trouble-maker. I'm so glad I don't pick up dog-ends any more although they're a feisty smoke. I was in the park once and saw a clear blue sky with just one cloud that looked like a cameo of my friend's dog. Not a fluffy cloud, striated. I asked someone to reproduce it on his computer but he couldn't so I just drew the shape of the cloud with a candle and washed over it with pale blue watercolour to show the underdrawing of the dog.

'In the sixties I was all ban the bomb and Yanks go home but the more LSD I took the more poetic I got. I was the premier wall-painter in the neighbourhood until Banksy came along. In 1974 some revolutionary in France started using stencils because posters could be torn down. Someone around here is doing fox stencils. I do white surfers on a triangle, at the top of a wave. I've put four of them at the top of St John's Hill. I like skating uphill, it's much more fun. Then when you go down it's quite a shalom. I mean slalom.'