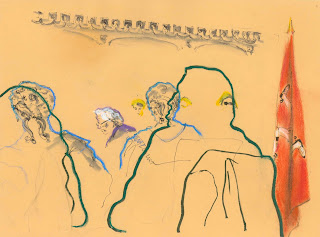 Dr Judith Townend of the Institute of Advanced Legal Studies, who kindly invited me to exhibit some law-based pictures in Senate House, asks the following:

How did you select the drawings?


First, they had to go with the tawny yellow Travertine walls. Then I went for variety.

Which ones were created especially for this exhibition?

I'd already drawn a QC in chambers doing an intense yoga routine. I don't own the originals so I framed two digital reproductions, about half actual size. (These are not to be confused with prints.) This is a terrible sin as such reproductions look dull compared with originals, but I wanted the QC's physicality to be part of the show.

I created a large drawing of a barrister for a particular space. The vulnerability of the work - unframed paper - reflects that of the subject. 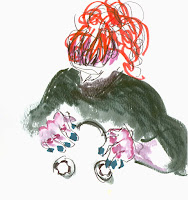 Senate House is a mysterious machine. My best discovery there is the magical realm of music and gadgets run by Hannah Thompson, the Leverhulme-funded Senate House Library sound artist in residence [left].

Can you explain a bit more about the rope work? 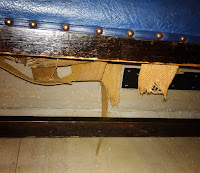 The exhibition space is a hectic accretion of furniture, recycling bins, red rugs and signage. Framed drawings would have to fight for attention. But how?

The first thing that caught my eye was jute - upholstery bands trailing from two broken benches. I decided to reflect the falling jute with jute climbing the wall. The tension of the rope would reflect the tension of the courtroom. Fred Hatt and Anna Bones of Anatomie Studio kindly installed a taut trail of rope and pink legal tape by the most physical group of drawings (the yoga QC and the Naked Rambler). 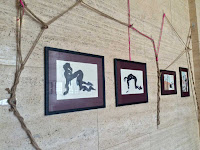 My plan was then exploded. I'd thrown such a tantrum about the state of the benches that they've been repaired. The power has now gone to my head.

What are people’s reactions to your in-court/about law sketching? Do they vary between lawyers or non-lawyers?

When I'm drawing in the public seats of the Supreme Court, reactions fall roughly into these categories:

'Where are the toilets?'

'Who's going to win?' Not my field, hunny. But if you're trying to interpret the body language of the justices, be careful. There's a difference between the performance of counsel and the undertow of judgment.

Not many counsel ask, 'Can you see my best side?' Even if they notice me through the blur of Supreme Court nerves, I think they twig that I'm not there to depict Action Person Top QC.

Non-lawyers say, 'Your other blog is better.'

Are you motivated by the notion of bringing the public more closely into contact with law and legal processes (as I am) or do you have another motive for choosing legal settings/themes?

I like live drawing (not the same as life drawing) - depicting the passing scene, almost as part of it. If you do it in the street, people want to talk to you. Sometimes I'm up for that. But during a court hearing, they can't. Good.

I was once on an after-hours tour of the Old Bailey when some people thought it would be a lark to climb into the dock and giggle a bit. They were solicitors. As I don't have the carapace of legal training, I was shocked - the dock is a numinous space and there but for the grace of God, etcetera - anyone who drives a car, for example, could end up there. Lawyers would dismiss that as sentimentality, but I still think that lawyers and people who administer and design courts have something to gain from reflecting about the legal process. I'm at the finger-painting end of things, though, and easily distracted by appearances. 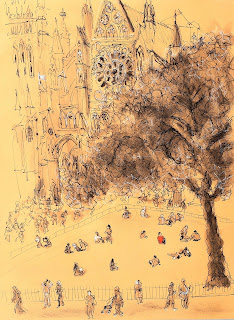