The Royal Courts of Justice. For a change. 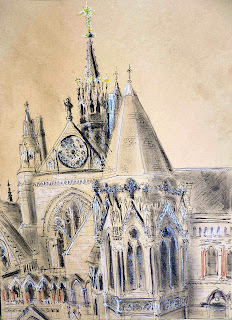 Kim Evans (@lifeincustody) has provided a vantage point - a room at the London School of Mediation.

Down on the pavement, protesters with a loud hailer are making unkind remarks about the senior judiciary.

Sometimes they block the traffic by jay-walking on the zebra crossing. An angry man hangs out of a delayed bus, shouting at the demonstrators. 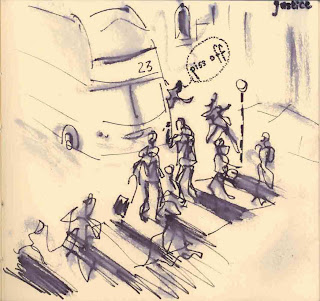 I share the office with a  unopened jar of tapenade and the Chinese characters below.

Disjointed phrases float up from the protest:

'Sixteen sixty-six right? The great fire of London was an inside job. Poor people burned out of their homes so that these buildings could be built yeah.'

The RCJ was completed in 1882, according to the godlike Pevsner, on 'a site of specially disreputable slums.'

Pevsner describes G. E Street's architecture as 'an object lesson in free composition, with none of the symmetry of the classics, yet not undisciplined where symmetry is abandoned.'

I refill my pen with malodorous ink. It's the little puddle festering in the bottom of the bottle, diluted with my paintbrush contaminant, life-class tea, which produces the softest of sepia washes. 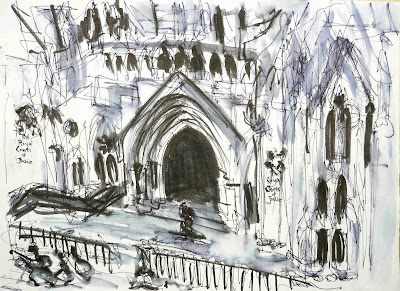 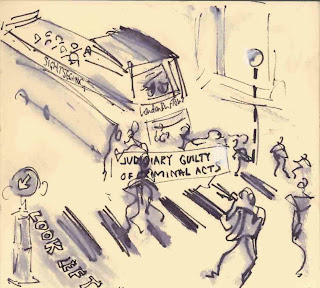 Posted by Isobel Williams at 21:43