On the pavement with the chewing gum man 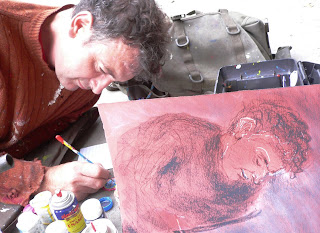 When he meets me in Notting Hill I'm in attention-seeking mood. I suggest setting up outside an embassy. 'I want a quiet life,' says Ben, so we compromise on Bayswater Road, near the Russian visa office. Two policemen approach. 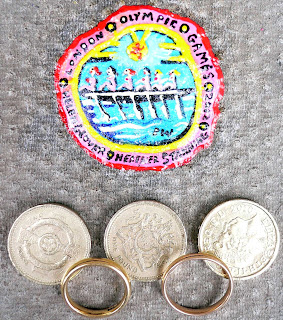 Are we in for a rumble? No chance. One officer beams and hails Ben: 'Hello! I'm from Haringey!' He tells his colleague that Ben is well known for his street art there. Ben wants inspiration. 'Ah,' says the colleague, 'if it helps, we've just won our first gold medal. Ladies' rowing.'

Ben prepares his white enamel ground: as he sets it with a blowtorch it blisters like frying egg white. He builds up layers of colour fixed with a cigarette lighter and car lacquer. We don't know how many women are involved, so Ben paints six naked ladies. It turns out there are just two - Helen Glover, Heather Stanning.

'I'm trying to make sense of representative art in the twenty-first century,' says Ben. 'I thought about hiding a little Russian in the picture but I can't be arsed.'

We have fish and chips at Portobello Gold. The barman glances at Ben's Jackson Pollock trousers and asks: 'Did you manage to get any of it on the canvas, sir?'

Then we settle outside Themes and Variations, a furniture shop in Westbourne Grove downwind of the in-store fragrance pumped out by Ralph Lauren's air conditioning. A pair of tourists pounce on Ben: 'You're famous in Italy!' A uniformed Olympics volunteer from Lincoln bounds up: 'Wicked! I've seen your programme on BBC3!' A Dutch couple admire his work: 'Here's something for a cup of coffee,' says one.

He has notebooks filled with requests for street miniatures. The people asking range from teenage boys in graffiti gangs ('If I don't tag the pavement they tag me - I end up with tags all over my clothes') to the bereaved seeking to commemorate the dead.

'I get to know everyone,' he says. 'If I get on the bus I know all their stories.'

Ben paints on bricks as well. His next exhibition is at Julian Hartnoll, Duke Street St James's, in October.