Not the last Sunday for Occupy London at St Paul's 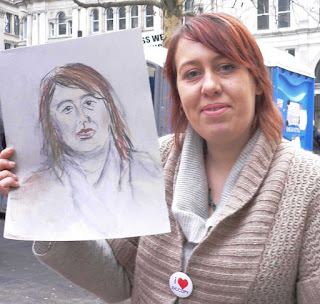 'Jesus said before he went, "Have love among yourselves," ' says Tammy Samede. She is the named defendant, representing the Occupy camp at St Paul's in the eviction trial. 'I love Occupy. Here there is honest to God straightforward love for each other. I don't need anything while I'm here and there are hugs everywhere. I've got a few changes of clothes and a couple of books but I'm happier in 33 years than I ever was before.'

She feels that the cathedral has given Occupy a mixed response: 'Sing like an angel and act like a demon.'

'My benefits have been stopped because I'm not seeking work that the government thinks I should doing instead of  trying to change the world. My flat's being repossessed. It's too late to change that now.We're not going to stop when the tents have gone. It's just going to get more and more amazing. It's a scary moment, losing my flat and stuff. But I don't deal with sacrifices. It's the right thing to do. My belief is that the universe provides and it sure did.'

Tammy was pragmatic about legal costs: 'I thought, I ain't got nothing. They can have a pound a week off me for the rest of my life and I'll have a long and meaningful relationship with the City of London.' In the event, the Corporation has waived costs against her.

'Occupy is about hope, it's about change, it's about people getting together,' says Tammy. 'All different kinds of people. Like Giles Fraser. Where else in life would I become friends with a canon of St Paul's? And they say the homeless services aren't able to cope. We've fed 'em. We've managed. I get angry about it.'

Formerly inhibited, Tammy has grown into a fierce public speaker and in court I saw her earn the judge's respect for her confidence under cross-examination.

Tammy recently embarked on treatment for post-traumatic stress disorder, caused by her troubled childhood. After seeing her poised performance on TV, one of her counsellors called her to say that further treatment wasn't necessary. (I am naturally wary of long-distance assessment.)

'Our brothers and sisters in Syria - they walk into the bullets.' says Tammy.That's how strong their desire is to change things. Here we are squabbling about a few tents.' 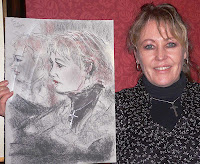 Tanya Paton, a catholic working on Occupy's 'multi-faith, believer and none' working group, charmed half a dozen free Portaloos out of suppliers and is arranging for them to be restored to their owners before the anticipated eviction. The cleaning is not free and has been a big part of the camp's budget.

Tanya is working on plans which include an interfaith Occupy pilgrimage to Canterbury in June. Her daughter Skye is a serious, happy eight-year-old whose rabbit is called Pebbles. 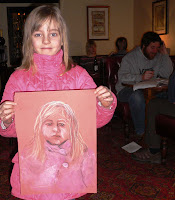 Back in the long-running sitcom which is the info tent, Lee studies his portrait: 'I look like a commissar.' He kindly gives me a SACK BORIS Oyster card holder produced by the Transport Salaried Staffs' Association. 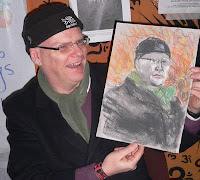 Lee is a legal observer at demonstrations and a children's entomological entertainer: 'I take giant spiders and cockroaches into schools - The Big Bugs Show. We have cockroach racing and sometimes the kids eat bugs from Fortnum & Mason. The spiders are called Barbie, Hayley and Cayley - nice girlie names. A giant spider's feet feels like a hamster on your hand, or the paws of a kitten. It helps kids to feel good about science.'

'Can I find you online?
'Someone's stolen my website,' he fumes. 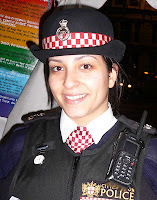 Constable 673 has never been drawn on duty before: 'It's amazing!' I've done a too-hasty sketch: she was standing in front of a bare light bulb so I couldn't see her clearly but my street rule is to be a passive instrument and draw whatever's in front of me without manipulation.

She is not permitted to accept the picture, as my other street sitters do, or to be photographed with it while on duty.

She turns politely to a woman with a dog off a lead. 'You know what I'm going to say,' she says, with quiet charm and instant effect.

I pop into the kitchen tent. Music blares from a laptop: You blocked me on Facebook. And now you are going to die. Lilias, a relative of H. Rider Haggard, who wrote King Solomon's Mines, is doing a limb-thrusting-out dance to keep warm. 'You should go up Ilford on a Friday night,' says Tigger, a female kitchen helper. A man carrying a red rose comes into the kitchen tent, smoking.

'You always break the laws of the kitchen,' sighs Mohammed. 'Please smoke outside.'
'And shove that rose up your arse,' says Tigger.
A man looks dubiously into a mug of pale coffee he has just made: 'There's something missing. I don't know what.'


I sit in on a general assembly - one of the amorphous meetings, open to anyone, which aim to produce consensus for the leaderless patchwork movement.

I sketch in the icy tent, my clockwork running down, and the talk is like a baroque opera: exposition, development, a return to the beginning, polite groans at the repetition... But the facilitator, Tina, grabs the sense and propels the makeshift orchestra to a conclusion.

I'm giving a lift home to Liz Beech, a Greenham veteran. She's lugging her portable manual typewriter, the vessel for visitors' comments over the past four months. The Museum of London want it, but she's keeping it. 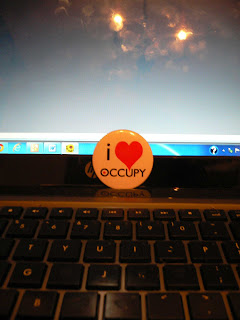 I've been coveting the badges and in return for a sketch Reuben, with white beard and black fur hat, gallantly procures one for me: I leave camp with a hug and a kiss.

Posted by Isobel Williams at 11:55