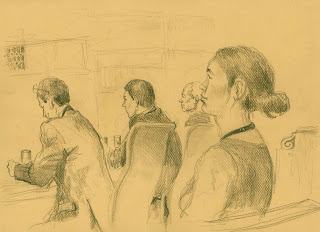 Today's case came about because the Pringle clan, seeking to confirm who should be chief, decided to bring scientific rigour to the proceedings. They organised DNA tests for men in the family. Just asking for trouble. And they got it. 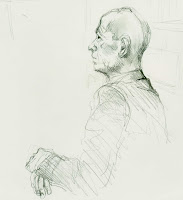 A mother was posthumously discovered to have given birth to the child of a man not her husband.

‘It was my instruction that it was a great surprise,’ says counsel.

Maybe she was following a primeval imperative to rev up the gene pool. Her handsome son, Lt-Gen Sir Steuart Pringle, 10th Baronet, had a distinguished military career and, according to his Daily Telegraph obituary, was ‘noted for his intellect, shrewdness and acerbic sense of humour.’ 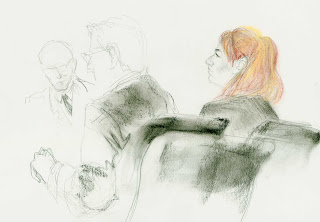 The DNA test result is not disputed. Instead, the court is examining how legitimacy and biological descent are related - ‘factors which are more important than the possible truth,’ as counsel puts it.

In the matter of Baronetcy of Pringle of Stichill is causing an establishment frisson because of its implications for holders of hereditary titles, and is the only Privy Council case this term to be heard by seven justices rather than the usual five. 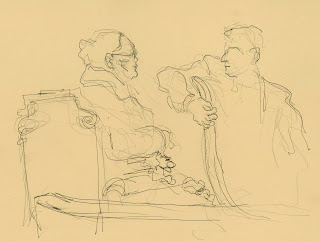 It isn't a tussle to see who inherits the Spode: there is no estate at stake, no proto-Chatsworth. It is about, as Lord Reed puts it, ‘the honour of holding the title.’ 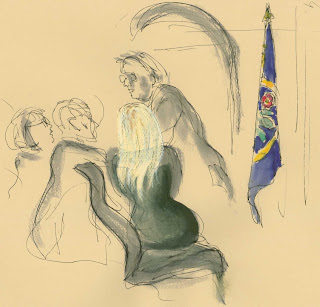 It starts with a bang. The bench tells both teams that their arguments should give more consideration to Scottish law, so there will have to be a further hearing. After a dazed ten-minute adjournment, counsel resume starting positions.

Counsel: ‘It is rather unfortunate that events have taken this turn.’

Lord Neuberger: ‘Well, we are where we are.’

The Judicial Committee of the Privy Council knows where and what it is. But what am I? I mean, like you care, but bear with me.

This is a detail from my father's birth certificate. 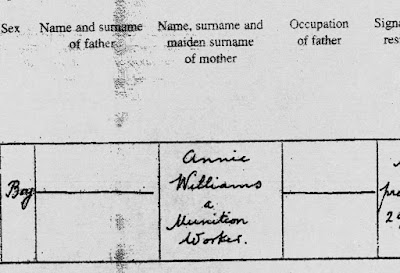 And this is a detail from his marriage certificate.

These tight-lipped inked lines are the only images I have of my unnamed grandfather. My parents didn't tell me about my father's illegitimacy until my sister and I worked it out independently. To them it was a stigma. I'm not telling you what could or should be, only what was the pattern of those times. When I see a pregnant woman, my conditioned reflex is to glance at her ring finger. 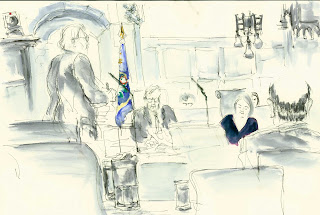 I never met my father’s mother. I don't know what she looked like. I wasn’t told her Christian name. I was brought up far from Toxteth, the lair of unmentionable family secrets.

So a few years ago, when those who could have been hurt were dead or cocooned by dementia, I followed the ancestry trail and joined some of the dots. 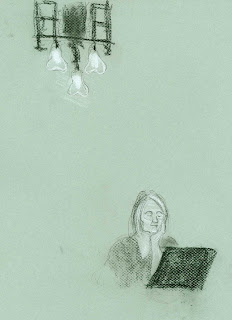 In 1918, Annie Williams was an 18-year-old who worked in a munitions factory in Liverpool and lived with her parents. Assuming that her pregnancy ran to a normal term, my father was conceived on or around the Whitsun bank holiday. She never said who the father was.

My father was born in 1919 and brought up by Annie's mother. 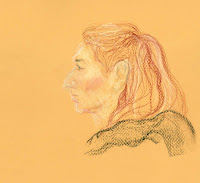 In 1923 Annie married a docker called Jimmy. Six months after the wedding she gave birth. They had four children. Jimmy, Annie and their growing brood lived in the same street as my father, who never entered their home and kept apart from his half-siblings.

I traced Jimmy’s only surviving child. 'Are you Arthur's girl?' she said immediately, as if she'd been waiting for me to ring. ‘Me dad would offer ’im sweets to come in the ’ouse and play with the other children but ’e never did. We always thought ’e was a shy boy who liked to be by ’imself. Gorra go now, luv.’

Counsel are relying heavily on A Treatise on the Law of Adulterine Bastardy by Sir Nicholas Harris Nicolas (1836), still in print and free online.

“You girls are my vocation. If I were to receive a proposal of marriage tomorrow from the Lord Lyon King of Arms I would decline it. I am dedicated to you in my prime.”
– The Prime of Miss Jean Brodie, Muriel Spark.

That makes him some dude but in court we’re told that the Lord Lyon King of Arms, who handles heraldic spats north of the border, found himself unable to deal with the matter in hand.

Edmund: …Why bastard? wherefore base?
When my dimensions are as well compact,
My mind as generous, and my shape as true,
As honest madam's issue? Why brand they us
With base? with baseness? bastardy? base, base?
Who, in the lusty stealth of nature, take
More composition and fierce quality
Than doth, within a dull, stale, tired bed,
Go to the creating a whole tribe of fops,
Got 'tween asleep and wake?

Is there any chance that you and I might be related?

If you see anyone who looks like my father, let me know.

Postscript: garbage from the Daily Telegraph - predictive text is a killer:

Posted by Isobel Williams at 11:45