In court with the Naked Rambler 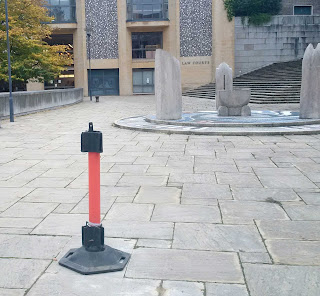 [Note: you’ll see that I’m not drawing the characters, just casting them from Spotlight.]

Someone has left a startling amount of male and female imagery lying around outside Winchester Crown Court.

It's a bracing reminder that we're here because of the Naked Rambler's genitalia and buttocks, frequent sightings of which have excited magistrates' opprobrium to such a degree that he now has his own special ASBO which leads with lumpen logic to a potential infinity of jury trials - this is his fourth - and custodial sentences.

He’s a huge burden on the taxpayer: a one-man Trident but with arguably less deterrent effect.

Before the jury are admitted, The Naked Rambler aka Steve (Jim Dale) is summoned from the deep.

I hear shackles rattling à la Marley’s ghost - surely he isn’t chained? The usher assures me that it's the jangle of the accompanying official’s keys to the cells. But later I’m told that, when out of sight, he’s in handcuffs.

Steve must have been wearing clothes occasionally - his forearms and neck are darker than his bony chest and shoulders. He is thinner and rangier than the last time I saw him, in August; his beard is on the march again.

From my viewpoint, only his top half is visible. In the dock he is shielded by a wooden screen below, glass above. He gazes up to heaven like a grizzled terrier or leans forward, straining to hear, his nose against the glass. 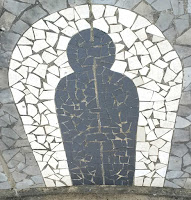 He rubs off the condensation from his breath and a fragment of Yeats, writing about Keats, comes to mind:

I see a schoolboy when I think of him,
With face and nose pressed to a sweet-shop window,
For certainly he sank into his grave
His senses and his heart unsatisfied

Hmn, a bit dark for Steve, but it’s there.

To my mind, the only person truly naked in this court is barrister Matthew Scott (Tim Piggott-Smith), who has been Steve’s loyal brief in the past.

Inaccurately billed as 'leading QC' on the front page of the latest Sunday Times, Scott is nevertheless top man - nobly standing on the sidelines as an unofficial amicus curiae without brief, wig, robe or ability to raise an invoice, because Steve wishes to represent himself. But that’s impossible if you aren't allowed in court at the same time as the jury. Steve won’t promise to remain seated - with his genitals out of the jury’s sight - so he is sent back to the cells. 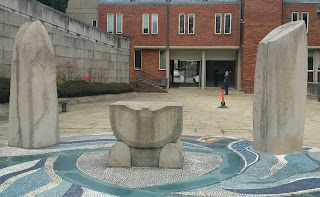 Prosecuting counsel: ‘Mr Gough does have a wish often to stand up.’

Judge: ‘We can’t ask a prison officer to chain his legs to the floor.’

A Police Community Support Officer (Billie Piper) is looking after cellophane packets containing a pale grey marl top and tracksuit bottoms, ready for Steve to pop on if he relents.


During one of the longueurs triggered by attempts to fit Steve’s caprice into court procedure, Scott asks his pupil (whose duties may not have been explained adequately at interview) to stand fully clothed in the witness box, then in the dock, ‎and scrutinises him to assess whether the offending genitalia really could be seen by the jury. Then Steve himself is summoned back to the dock for the same exercise. When Steve stands up, ‘The top of the pubic hair is visible, my lord.’


The judge (Timothy West elided with Ronnie Barker) is humane and authoritative. He is particularly considerate towards Scott and expresses profuse gratitude: to represent this, in my notebook, I sketch a heart and a flower, then realise with horror that I have drawn in the court, my biggest fear as it’s illegal to do so. 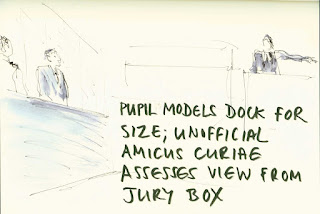 It’s tempting to glamorise Steve as Joan of Arc or Peter Grimes or Job (‘Naked came I out of my mother's womb, and naked shall I return thither’) but that would be false.

I won’t regale you with Steve’s Fotherington-Thomas comments about the human body because I think they are irrelevant. I spend a lot of time drawing people who are naked as models or performers. Whether professional or enthusiastic amateurs, they embrace discipline and stick up notices on doors to the outside world saying NO NUDITY BEYOND THIS DOOR. 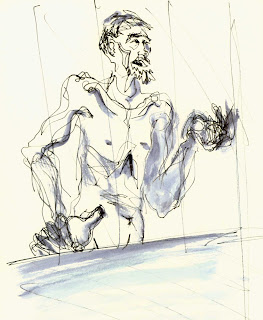 Steve hasn’t found the door. He isn’t even looking for it. His struggle is not concerned with some right to be naked in Asda, but with an eccentric compulsion to challenge authority.

He is using nudity as a figleaf.‎

‘The arguments against me have no foundation,’ he says.

The judge questions his intransigence: ‘Do you think something is going to change in your lifetime?’
‘Probably not.’
‘You’ll just get older and colder?’

In the court cafeteria, the clock has stopped. 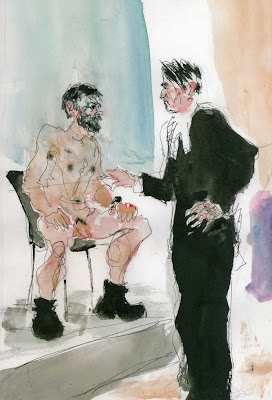 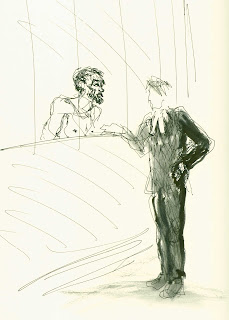 Steve is remanded in custody awaiting a psychiatric report and sentencing.

Posted by Isobel Williams at 11:36