'What are you doing for Christmas?'
'Going to Crisis.'

She thought I meant a nightclub. But it is a club of sorts. It has people who are guests year after year. Mostly single and homeless.

Volunteering for Crisis gives you a rare example - not found in corporate life - of people working together with a default position of kindness, because that's all we have. The centres are teeming with volunteers wresting happiness for themselves and others from the nation's distress/disgrace.

For years I heard the siren song of Crisis but thought no, I can't cope with all those scary people. But in 2011 I started to draw the scary people attracted to the Occupy protest camps. It was a doddle. This is my second year at Crisis.

﻿﻿
The scariest person I meet is a Green Badge (Crisis High Command).

'Who are you and what are you doing here?' she barks, existentially.

A drawing is an experiment, a what-if. Most drawings should be thrown away. But when you're drawing the face of a guest at Crisis you have to do the best you can, every time, and you sweat on the result, because it matters to someone who has never been drawn, who is faceless, who sees the drawing which you will give them as validation.

There are extraordinary volunteers. Inspirational Faery, aka Charlotte, makes up her own agenda - pop-up salsa, anyone?

Cate (of cyoga.co.uk) teaches yoga. A couple of men challenge her strength. She idly supports herself on her arms for a while, levering herself up and down.

Men gaze and sigh at women, with courtesy. I sketch a shaggy ex-punk/glam-rocker in a buttercup yellow suit.

'Do you believe in free speech?' he asks.
'Yes.'
'Give me your phone. Why do moths fly with their legs open?'

Two beautiful young couples in love ask me to draw their double portraits. I can't show you these, or any other pictures of guests, as their identities are shielded.

Boxing Day: Transport for London tweets that traffic is sluggish or stationary around shopping centres in east and west London.

At the Crisis day centre, the idea of using a holiday to drive to a traffic jam to buy stuff is...

I go home via Sainsbury's for a small bottle of wine and a large bar of chocolate. Serving at the tills are young men, strong and handsome like many of the guests at Crisis. Lucky bastards to have jobs, I think. 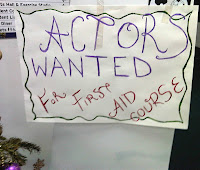 Posted by Isobel Williams at 22:09

Email ThisBlogThis!Share to TwitterShare to FacebookShare to Pinterest
Labels: Crisis at Christmas