Activist squat: from the pub to the psychiatric hospital

After much nagging from me he lugs some clothes out to the car.
'Cool car,' he says.
I haven't got time to tell him he's an activist and cars aren't cool.

The new squat, off the Kings Road, is a disused private psychiatric hospital for young people which was last cleaned in 2007 according to notices on the walls. The building is eerie with an unlit spiral staircase and blind corridors.

It's a landlocked Marie Celeste. The patients' notes, complete with names, have been left lying around in the office by the departed management. Chronicles of harm and self-loathing. A girl carved FAT on her foot with a paperclip. A successful escaper went to Birmingham by train then returned the next day. 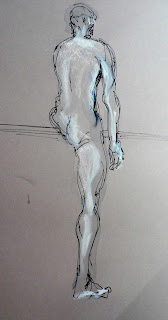 Four storeys and 17,652 square feet of dustiness. Individual en suite rooms with nowhere to hang yourself. The windows are sealed so that you can't jump out.

One of the squatters, who camped outside St Paul's cathedral with Occupy through the chill of last winter, models later on for the life class I go to.

He tells me that last night the squatters ate rump steak and sausages retrieved from a waste bin outside Waitrose and cooked in the hospital kitchen. 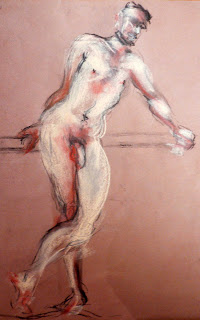 Posted by Isobel Williams at 16:42