The case of the high profile

Michael Paget is one of the barristers representing Tammy Samede, the named defendant who stands for the Occupy camp at St Paul's like a tiger mother. 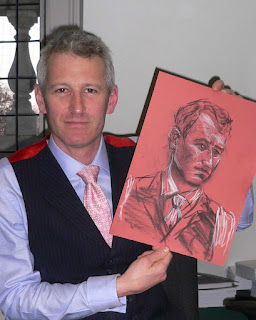 He muses: 'I've got several artists in the family...'

I say: 'Show me your profile.'

I get a bit gibbery. Any chance of my doing a half-decent sketch flies out of the window, along with my concentration.

Michael is the great-grandson of Sidney Paget who illustrated Conan Doyle's stories when they first appeared in the Strand Magazine (and added the deerstalker). We had bound copies at home and as a child I was transfixed by Paget's drawings. The model for Holmes was Sidney's younger brother Walter, who bequeathed his elongated, elegant profile to the iconography which led to Basil Rathbone and Jeremy Brett. 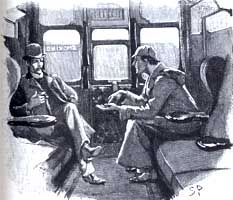 'I'm  more like my mother, who's also an artist,' says Michael, but the ghost of the profile is there.

The observant ghost of Sidney is present too, so from under the rubble of my confidence I do two rubbish drawings. A sense of history is a burdensome thing.

Michael, who is at Garden Court Chambers and has the Victoria Climbié inquiry and Dale Farm on his CV, is also representing the Sheffield Occupiers: ‘I hope the Master of the Rolls gives the appeals a fair hearing. It's been a privilege to work for Tammy and Occupy. And the full court room has been in complete contrast to my usual cases, where the audience is one opponent (very bored) and one judge (often asleep).'

Posted by Isobel Williams at 11:07